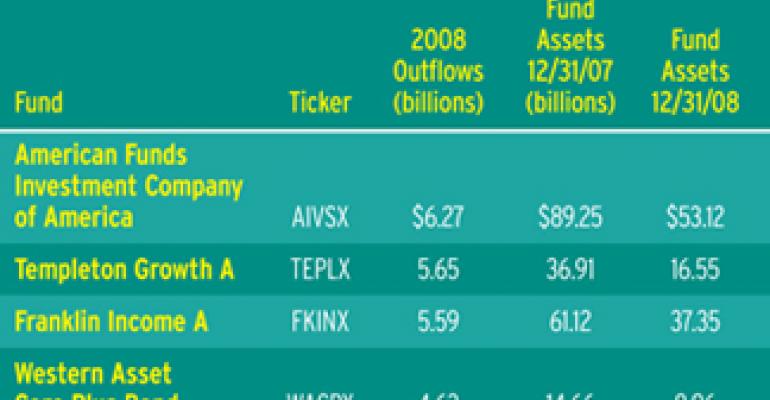 Redemptions can cause a variety of problems. For starters, outflows force portfolio managers to sell holdings at the worst time, locking in losses. Forced selling in the downturn took a severe toll on ultrashort-term bond funds, including AMF Ultra Short (AULTX), Metropolitan West Ultra Short (MWUSX), and Fidelity Ultra-Short Bond (FUSFX). The funds owned corporate and mortgage-backed securities that plunged. To raise cash for redemptions, managers sold during the darks days. Having sold the depressed securities, the funds could never profit from any rebounds.

Instead of selling losing holdings, some managers avoid locking in losses by selling winners at a profit. But this creates another problem: extra tax bills for shareholders. Under the IRS rules, funds realize a taxable capital gain when they sell a security at a profit. The gains must be distributed every year to shareholders who owe taxes.

The cap gains taxes can be particularly painful during downturns. Last year, many shareholders suffered such distressing news. Among the disappointing performers was Ariel Appreciation (CAAPX), which lost 40.7 percent in 2008 but distributed capital gains of $3.11 per share.

Along with tax bills, funds hit by redemptions may suffer from high trading expenses. Under normal circumstances a seller faces trading costs. Total transaction costs can exceed 1.5 percent of a fund's assets, says Roger Edelen, a finance professor at the University of California, Davis. The transaction costs are directly subtracted from returns. “When funds trade to manage flows, it can really hurt performance,” says Edelen.

Should you avoid funds with big outflows? Under normal circumstances, you should avoid funds that have lost a double-digit percentage of their assets, says Karen Dolan. “You should be careful if a fund has a lot of redemptions and it is performing way out of line compared to peers,” she says.

But Dolan notes that these are not normal times, and some solid funds have faced big redemptions. Dolan says that you should consider keeping funds with sound long-term track records. She cites Third Avenue Value (TAVFX), which has faced big redemptions, so that assets have dropped from $11.1 billion in 2007 to $4.3 billion now. Despite recent losses, Third Avenue has outdone most competitors over the past decade. “This is an example of a fund with a strong management and a sound strategy,” Dolan says.

To steer away from funds that could suffer big outflows, stick with funds that charge redemption fees, says finance professor Roger Edelen. Funds with fees typically charge 1 percent or more for investors who sell their shares within 30 days of buying them. The fees scare away frequent traders and can help to cut transaction costs dramatically, says Edelen. Top-performing funds that charge 2 percent redemption fees include Calvert Social Investment Equity (CSIEX) and Tocqueville (TOCQX).