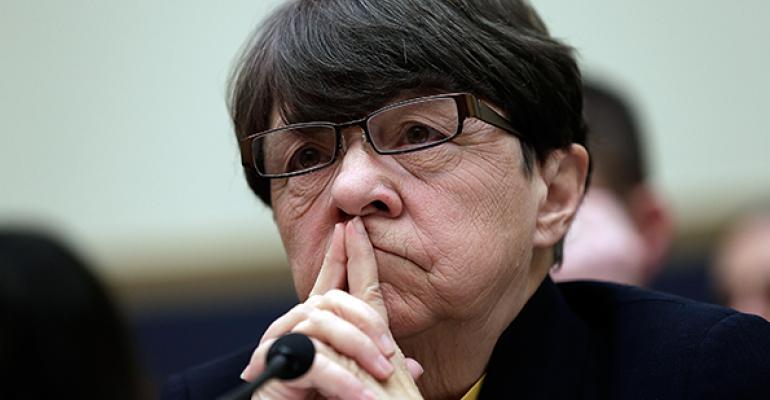 SEC Chair Mary Jo White wants her agency to have a bigger role in regulating Treasuries.

NEW YORK, Oct 24 (Reuters) - Two years after the most abrupt bond-trading disruption in recent memory, U.S. regulators appealed on Monday for a clearer view of electronic trading in the vast Treasury market so to better understand what causes such shocks and to head off looming risks.

At issue is whether new trading restrictions are needed in the $13.6-trillion market for U.S. government debt, which draws global investors to its ultra-safe assets, but which has proven fragile in a series of recent price shocks. The landmark event was the "flash rally" on Oct. 15, 2014 when bond prices swung wildly within minutes for no apparent reason.

One top regulator, Securities and Exchange Commission Chair Mary Jo White, used a conference here to advocate a bigger role for her agency in regulating Treasuries, which are largely overseen by the Federal Reserve and Treasury Department.

"The controls we put in place around trading practices in many cases should apply to U.S. Treasury securities as well as equities, especially where those practices can threaten to destabilize markets or hurt investors," she told a gathering of bankers, investors and fellow regulators at the New York Fed.

But while the SEC has dealt with abrupt shocks in the more electronic market for U.S. stocks, the Treasury market is far larger and deeply reliant on the actions and reactions of dealers, investors and regulators around the world.

The Treasury, Fed and others are deciding what to do about the growing presence of computer-driven high-frequency trading in the market that serves as a venue for financing U.S. government spending and as a conduit for monetary policy.

New York Fed President William Dudley cited not only the 2014 "flash rally" but also this month's plunge in the British pound, which he said happened "seemingly without a major catalyst."

Information is "not widely available" in these markets, he said, meaning it is difficult to "effectively analyze these markets, understand the sources and risks of flash events, and evaluate how liquidity is changing."

Regulators, Dudley added, need "improved access to transaction-level data" in order for the Treasury market to keep doing its job as a benchmark for financial assets worldwide and a source for short-term collateral.

While banks and investors worry too much public information about trading could reveal their strategies and intentions and lead to less efficiency, regulators, who often must appeal to these firms for the data, need this information to decide whether new rules are needed and to uncover illicit activities.

Exchanges provide much data on Treasury futures trading. But information on the cash Treasury market and results of bond auctions are far more limited, while brokers and venues provide scant data to the public.

Last week, the SEC approved the Financial Industry Regulatory Authority's proposal to require its members to report their trades of U.S. Treasuries beginning in July 2017. The Fed is collecting this data.

Dierdre Dunn, managing director at Citigroup Inc, urged caution since "a very material part (of the market) is quite visible" already. She warned the gathering about flooding regulators and the public with data that unintentionally benefits firms that can sort and capitalize on it.

The U.S. Treasury "remains committed to close and careful review of the data before making any determinations," Antonio Weiss, counselor to the Treasury secretary, said in a speech. "But we believe the debate should shift from whether to seek increased transparency to how, when, and on what basis."

A regulatory report last year on the October "flash rally" cited the increasing prominence of algorithmic trading strategies by firms that can move billions of dollars of transactions within fractions of a second.

Weiss said any data should only be disclosed after a time delay, with limits on size, and that it should be phased in.

White, meanwhile, said the Treasury market could benefit from SEC rules in the equity market that ensure firms engaged in short-term trading are registered as dealers, and have the required capital buffers and security controls.

"I have recently directed the SEC staff to develop recommendations for the Commission to consider applying measures that would further enhance our regulation of platforms that trade government securities," she said. (Reporting by Richard Leong and Jonathan Spicer; Editing by Chizu Nomiyama and Meredith Mazzilli)