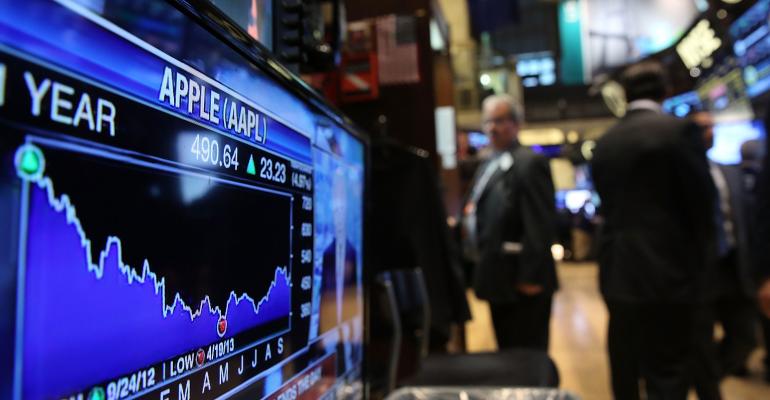 (Bloomberg) -- As earnings stagnate, U.S. companies looking to charge up their stock returns with repurchases are turning to debt markets like no time since the dot-com bubble.

Led by Apple Inc. and CBS Corp., S&P 500 constituents have rushed to sell bonds to finance the repurchases of their own stock. The proportion of buybacks funded by debt rose above 30 percent in June for the first time since 2001, data compiled by JPMorgan Chase & Co. and Bloomberg show.

The willingness to borrow shows how loath chief executives are to give up what has been the most consistent source of demand for equities the last few years. Though more company cash flow is used on capital investments than investors probably think, the data highlight one of the many hazards for bulls should the earnings recession lengthen or borrowing costs rise.

“It tells a lot of things about how cheap capital is and where the investment opportunities are,” said Matthew McGeary, a Stowe, Vermont-based fund manager with Eagle Asset Management, which oversees about $31 billion. “Companies are still struggling to find growth and buying back shares is a good way to grow per-share earnings. But you should think about the sustainability of this strategy.”

Using proceeds from debt sales to send cash to stockholders is getting more popular as five quarters of profit declines contributed to a financing deficit that JPMorgan analysts say will last for the rest of the year. Should the Federal Reserve raise interest rates for a second time, stock repurchases may become the first casualty as borrowing costs go up.

Buybacks are already slowing amid the worst profit slump since the global financial crisis and as the S&P 500 sits near a record high. After snapping up trillions of dollars of their own stock in a five-year shopping binge that dwarfed every other buyer in the equity market, companies such as IBM Corp. have put on the brakes, with total announced repurchases falling 18 percent in 2016 from the average pace in the last three years.

Bucking the trend of deceleration, debt-funded buybacks are on the rise. About $157 billion of repurchases were backed by new debt issuance in the 12 months through June, 8 percent higher from a year earlier. Last month, Apple sold $7 billion in bonds in its third undertaking this year to add debt for shareholder return and CBS raised $700 million from a debt offering with part of the proceeds intended for buybacks.

One reason it’s happening is that cash flow from operations isn’t enough to cover outlays from plant upgrades to acquisitions. While $425 billion of internal funds were generated in the second quarter, that was about $35 billion short of what was needed for things such as capital spending and dividends, data compiled by JPMorgan show. At $151 billion, fixed investment remained the largest use of funds, followed by $137 billion of actual buybacks, $110 billion in dividends and $61 billion for takeovers.

The rush to borrow amid falling bond yields have pushed debt to 32 percent of total assets at non-financial firms in the S&P 500, the highest level since 2008. The increase in leverage means further cuts in buybacks are likely should rates go higher, according to Dubravko Lakos-Bujas, an equity strategist with JPMorgan. Unlike dividends that tend to be consistent, companies are less reluctant to put buybacks on hold.

The influence of corporate buybacks on share performance has shown signs of waning. Since peaking in February 2015, an S&P 500 index of companies repurchasing the most shares has lost 5.6 percent, compared with a 1.4 percent gain in the equal-weight index of the benchmark gauge.

“Companies have massively loaded balance sheet. When higher rates start kicking in, that’s basically going to be additional headwinds,” Lakos-Bujas said by phone. “Buybacks have supported equity prices a lot in this cycle and could be less of a tailwind.”