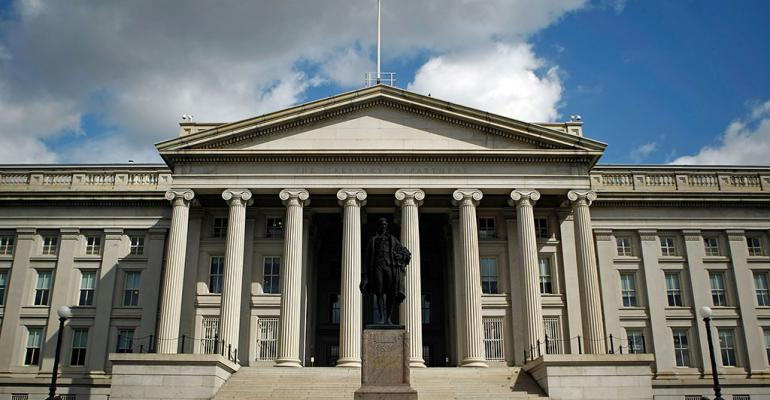 The Trump administration's proposed tax reforms may give the market a new lease on life.

(Bloomberg) --Donald Trump to the rescue?

The $8.55 trillion U.S. corporate bond market has bucked concerns over mounting company indebtedness and so far resisted fears about the knock-on effects of the potential unraveling of the 35-year-old bull-run in government debt.

Now, analysts at Barclays Plc are giving fixed-income investors fresh reason to be constructive on U.S. corporate bonds in the medium- to long-term. They predict the incoming Republican administration’s far-reaching tax reforms may give the market a new lease of life by curbing the post-financial crisis jump in leverage for industrial issuers, and buoying returns for bondholders over the next decade.

Barclays analysts led by New York-based Jeffrey Meli said companies may use more of their retained earnings to finance operations at the expense of bond issuance, in the event that President-elect Trump signs off on a tax plan advanced by congressional Republicans that includes a proposal to reduce corporate tax rates to 20 percent from the current 35 percent .

“A cut to the tax rate would increase the cash flow available to companies to service debt and, thus, improve credit quality,” the analysts wrote in a recent note. “Furthermore, we expect companies to decrease leverage because the tax shield benefit of debt would be reduced at lower tax rates, effectively increasing the after-tax cost of debt.”

In other words, even as lower taxes provide companies with more firepower to service debt obligations from their cash-flow, the reduction in the tax rate would make borrowing in the bond market less alluring relative to equity funding, thereby encouraging firms to reduce so-called gearing ratios.

The analysts project U.S. corporate issuers could decrease debt-to-earnings before interest, taxes, depreciation, and amortization (Ebitda) ratios from 4.1 times to about 3 times, if corporate tax rates were lowered to 20 percent. That move would likely be driven by industrial companies given their greater regulatory freedom to decide gearing strategies compared with the likes of banks and utilities, two other big issuers in the debt market.

They also predict the growth rate of U.S. industrial debt will decline, with the market growing to around $3 trillion over the next decade from around $2.5 trillion currently, compared with $4 trillion in the event of no change in the tax regime.

That could provide another fillip for the corporate bond market, which has been rallying since the November elections thanks to an uptick in risk appetite, higher expectations for corporate earnings, and demand for debt obligations that help cushion the impact of rising interest rates.

A House Republican plan to pay for lower corporate taxes calls for the removal of the right companies enjoy to deduct interest payments from income -- a key tax benefit that has boosted the incentive for corporate borrowing for half a century. That isn’t a base-case assumption of the Barclays analysts, but if the policy does see the light of day it would also prove friendly to investment-grade bondholders by reducing the incentive for firms to dice with debt, they said.

That echoes a December analysis from Bank of America Corp. showing the removal of the benefit may cause the $4.94 trillion investment-grade corporate bond market to contract by as much as 30 percent.

To be sure, far-reaching tax reforms won’t trigger firms to enact sweeping changes to their capital structures overnight, given the risk such policies might be reversed if the political climate shifts. Projecting corporate-financing behavior more generally isn’t straight-forward.

Still, while the post-election rally in equities has been driven, in part, by expectations of tax reforms, Barclays’ forecasts underscore how a Trump-fueled regime change in the fiscal landscape may cap debt supply and crimp leverage to juice returns in the long-term, even as other headwinds for bond investors mount.