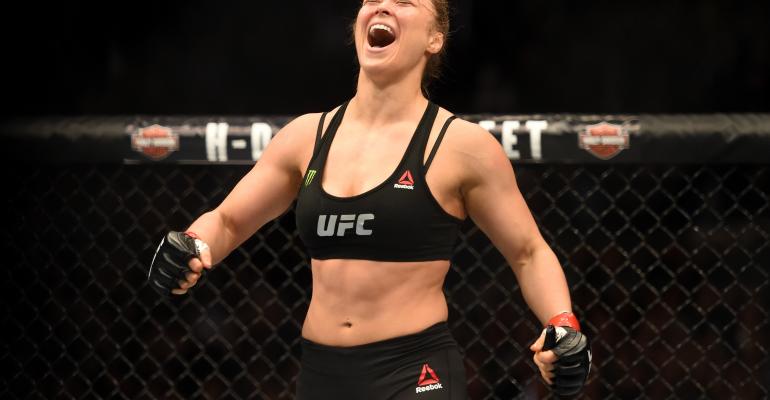 (Bloomberg) -- It was, by almost any measure, a knockout deal -- the Wall Street equivalent of a haymaker.

A cool $500 million of high-risk loans went up for sale and, in a blink, more than $2 billion of buy orders came pouring in.

The hot property? None other than Ultimate Fighting Championship, that global bastion of bloody, bone-breaking cage-fighting.

UFC has transformed a sport once derided as human cockfighting into a worldwide phenomenon broadcast in more than 100 countries. But now a powerful financial force -- record-low yields -- has turned the promotion company into a monument to investors’ mad hunt for something, anything that pays attractive interest rates.

Next to plain-old U.S. Treasuries, UFC’s new second-lien loans hold out an eye-popping yield -- 8.5 percent. But, as ever, where there is reward there is also risk. The eight-year loans are rated seven levels below investment-grade, rank behind other creditors and are typically more difficult to buy and sell.

“The fact that there’s a food fight over these loans shows the yield-starved market we are in right now,’’ said Mike Terwilliger, a money manager at Resource America Inc.

Casino moguls Frank and Lorenzo Fertitta paid $2 million in 2001 for the company, which began as a mixed martial arts organization. They took a league that struggled to win approval from state athletic commissions and turned it into a billion-dollar business buoyed by fighters such as Ronda Rousey and Conor McGregor. UFC stages sold-out events around the world and hits almost 800 million TV households.

Wednesday’s loan sale was part of a $1.8 billion debt package for the buyout. Silver Lake was keen on raising the second-lien loans because company owners are able to more easily repay that kind of debt compared with bonds, said people with knowledge of the matter.

Initially, banks weren’t willing to commit to the loans because of concerns they might not be able to find buyers, offering instead to sell that portion of the debt in the bond market. As they got closer to marketing the deal though, an investor frenzy for high-yielding debt convinced them they’d be able to sell.

Hedge funds, alternate lenders and mutual funds were among about 70 separate investors that participated in the deal led by Deutsche Bank AG and Goldman Sachs Group Inc., one of the people said.

The demand was so strong that UFC was able to lower the interest rate on the junior loans twice this week, the people said, asking not to be identified as the matter is private.

George Goudelias, who heads the leveraged-finance investing group at Seix Investment Advisors, said he was struck by the frenzy.

"I haven’t seen that in a long time," said Goudelias, whose firm oversees about $25 billion. "I cannot explain the phenomenon. It’s a business that’s hot right now but it’s star dependent. You have to be careful."

In all, the company raised $1.4 billion in first- and $425 million second-lien loans after boosting the senior debt on offer. This despite a balance sheet that would be more than eight times leveraged without applying adjustments.

And it’s not just UFC. Two other companies are seeking to exploit the investor demand for yield this week.

Junk-rated mobile phone insurer Asurion Corp. is marketing new loans using a structure that was in vogue in the run-up to the financial crisis. It’s looking to raise $550 million of unsecured debt to buy back shares. The so-called payment-in-kind term loan would give the company the option to pay off interest with additional debt. Its $2.15 billion of second-lien loans were trading close to 80 cents on the dollar less than six months ago, according to prices compiled by Bloomberg.

“It worries me,” said Craig Russ, co-head of bank loans at Boston-based Eaton Vance Corp. “If the market gets hot and heated and there’s a dearth of supply, people start to get in a little feeding frenzy.”