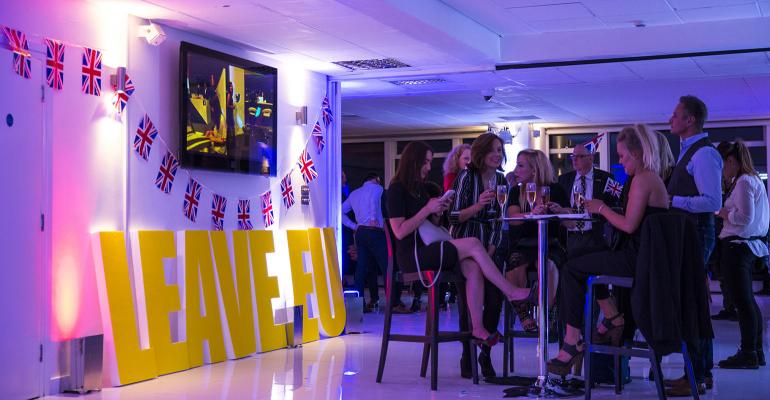 <p>Supporters of the campaign for Britain to leave the European Union celebrate on Thursday night.&nbsp;</p>
Investment>Fixed Income

(Bloomberg) -- Treasuries surged, pushing benchmark yields down the most in seven years, as Britain’s vote to leave the European Union drove a rush for the safest assets.

Financial markets are on a “wild roller coaster," Mohamed El-Erian, the chief economic adviser at Allianz SE and a Bloomberg View columnist, said in a post on Twitter. Trading was “getting wilder” and "more disorderly” he posted later. The pound plunged and the yen strengthened briefly beyond 100 per dollar while Japanese and Australian bond yields set record lows.

“If you’re trading Treasuries right now, you have to say you have no way of fighting this tremendous move,” said Mike Franzese, the New York-based head of fixed income at MCAP LLC, a broker-dealer.

“We’ve seen nothing but people trying to buy this market, and panic is palpable,” said John Gorman, the head of U.S. debt trading for Asia and the Pacific at Nomura Holdings Inc. in Tokyo. Nomura is one of the 23 primary dealers that underwrite the U.S. debt.

The rally adds to the biggest first-half gain for U.S. government securities in six years, driven by demand for safety. The Bloomberg U.S. Treasury Bond Index has returned 3.8 percent in 2016.

Britain’s decision took investors by surprise after financial markets had priced in a vote to remain in the 28-nation bloc and polls showed it was too close to call. The Bank of England said Friday it will take all necessary steps to ensure stability, while central banks across the world pledged to take action as needed to avert any breakdown in financial-market liquidity.

“It’s now a question of how much flight to quality is appropriate,” said Anthony Cronin, a Treasuries trader in London at Societe Generale SA. “The markets are very choppy and still trying to find a location where they are comfortable -- it may take a few days.”

“Obviously, safe haven bonds instead of equities will benefit,” Gross, manager of the $1.4 billion Janus Global Unconstrained Bond Fund, wrote in an e-mail.

A gauge of where bank borrowing costs will be in the months ahead, known as the FRA/OIS spread, rose to the most extreme level since 2012 as the referendum sapped investor appetite for risk and spurred concern some European banks will find it harder to fund themselves.