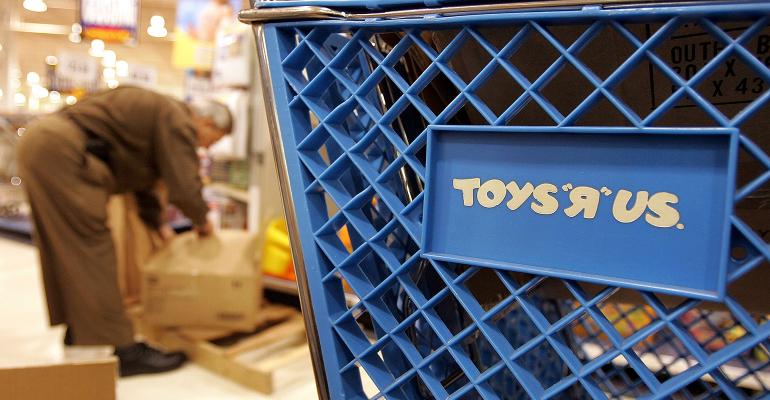 Bankruptcy did little to damage sentiment toward the credit sector.

(Bloomberg) --“From bikes to trains to video games, it’s the biggest toy store there is,” went the 1980s Toys ‘R’ Us Inc. theme tune. Now the erstwhile retail giant leaves behind some big questions for capital market as it embarks on what is likely to be a messy bankruptcy proceeding.

Chief among those is the degree to which the company’s bankruptcy filing signals trouble for other junk-rated issuers, and whether investors may once again be caught off guard. Here are three takeaways for capital markets from this week’s news.

While the difficulties of the debt-laden company had been broadcast to the market for some time, bond investors nevertheless appeared to be surprised by the events of this month. The price of Toys ‘R’ Us debt due 2018 plunged from 96 cents on the dollar on Sept. 5, around the time reports of a potential bankruptcy first began circulating, to a low of 20.2 cents on Sept. 18, when the company officially filed for protection.

Investors may have misjudged the ability of Toys ‘R’ Us to continue refinancing its debt, assuming that rampant demand for yield would ensure a continued stream of fresh funding from a broadening array of buyers including exchange-traded and mutual funds. For years the company had been rolling over its debt, often secured against the value of its land. Even in an era characterized by generally low borrowing costs and benchmark rates, a company can be sunk by an outsized debt load. According to the Toys ‘R’ Us bankruptcy filing, the firm had more than $5 billion in debt outstanding, a legacy of successive refinancings and a leveraged buyout in 2005, and was paying around $400 million a year to service it.

Without the debt burden, the store would have been making $500 million to $600 million a year in profit, according to estimates from Jim Silver, an analyst and the editor of TTPM.com.

“The problem is the debt,” he said.

3. The Bond Market Is (Oddly) Resilient

The Toys ‘R’ Us drama did surprisingly little to knock sentiment in the wider credit sector this week. Total returns on the Bloomberg Barclays U.S. High-Yield Index of junk-rated debt sold to companies with weaker balance sheets continued to climb.

Toys ‘R’ Us had just two bonds worth less than $800 million in the index for a total weighting of about 0.04 percent, which may explain some of the broader market’s resiliency. But the lack of contagion to even the retail debt space, which has long been the target of credit traders betting against brick-and-mortar retail, has surprised many.

Almost none of the bonds in Bank of America Merrill Lynch’s High-Yield Retail Index have dropped more than 1.6 percent since Sept. 5, according to research from Bespoke. Meanwhile, junk-rated retail debt still managed to eke out positive returns of about 0.2 percent this week, compared to 0.5 percent for the overall market.