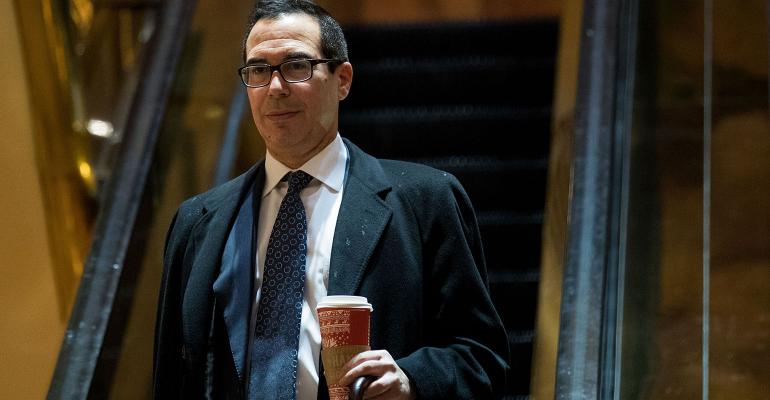 U.S. Treasurys are popular because they're safe and predictable. Fifty year or longer bonds changes that.

By Brian Chappatta and Alexandra Harris

That’s the message from traders, strategists and even duration-starved bond investors about the potential for 50- or 100-year U.S. obligations.  Steven Mnuchin, President-elect Donald Trump’s pick for Treasury Secretary, said he’d “take a look at everything,” in response to a question about those maturities in a Nov. 30 CNBC interview.

The remarks sent 30-year U.S. bonds into a tailspin, even though the Treasury has persistently slapped down the notion. The move sounds reasonable in theory: Long-term interest rates are near record lows, and other countries have issued maturities of 50 or more years, though not necessarily on a regular basis. But for the U.S., that approach carries risk: The predictability of the nation’s debt auctions lures investors and lowers borrowing costs. What’s more, the average maturity of the world’s biggest bond market is already set to reach historic highs.

“Treasury has built up a very good reputation as a predictable, reliable issuer that doesn’t play games with the yield curve -- investors like that,” said Aaron Kohli, an interest-rate strategist in New York at BMO Capital Markets, one of the Federal Reserve’s 23 primary dealers. “If you lose that, you issue the 50-year because it’ll make people happy, that’s not something that’s really going to be a strong positive in the long run.”

The Treasury says regular issuance has been a “pillar” of its debt management since the 1970s. This month, Daleep Singh, assistant secretary for financial markets, reiterated the importance of that stance at a presentation at Columbia University.

“Treasury does not face a one-time issuance decision,” Singh said in prepared remarks. “What would be the effects of an abrupt cancellation of a 50-year bond issuance, or the program itself, on the credibility of Treasury as a regular and predictable issuer?”

The challenge for Treasury in expanding its menu of offerings starts with the type of auction it uses, which may not lend itself well to longer maturities.

Treasury uses what’s known as a Dutch auction -- it fills the highest bids and then lower ones, with the lowest level filled determining the price for all. By contrast, Belgium and Ireland issued ultra-long bonds via private placement, while Austria, France, Italy and Spain used a syndicate of banks. In those approaches, the issuers get a better sense of borrowing costs and demand before committing to the sale.

The U.S., with $13.9 trillion of marketable debt, goes into auctions comparatively blind. That may pose a risk when issuing long-dated securities because any pullback in demand could cost taxpayers millions of dollars, said Michael Cloherty, head of U.S. interest-rate strategy at primary dealer RBC Capital Markets.

“Issuing a 50-year without a syndicate is much scarier than any other maturities,” he said. “The U.S. has so much debt that to be relevant, you have to issue a ton of it, and it’s going to be messy to auction off.”

One of the Treasury market’s biggest draws is its size and liquidity. It’s a haven during volatility and a benchmark for global borrowing costs in part because of the ease of trading in and out of U.S. debt.

An ultra-long maturity might complicate matters. Insurance companies and pension funds are likely buyers because they need to match liabilities that span decades. Yet they’re also prone to hold until maturity, meaning the securities may not be readily available to trade in the secondary market.

Treasury would be “very cautious at the beginning about the size of the issuance -- they obviously want it to succeed and have proper sponsorship and liquidity,” said Thomas Pluta, co-head of rates at J.P. Morgan in New York.

There’s also no guarantee of demand. Thomas Girard, who manages about $142 billion as head of fixed-income investors for New York Life, said yields might not be high enough.

“If it’s purely just 50-year long Treasuries, maybe we’ll take a look at it, depending on the market environment and our particular needs,” he said. “But from a selfish perspective, we’d like to see something more than just Treasuries.”

To Matthew Hornbach at Morgan Stanley, there’s an easier way for the government to lock in low borrowing costs for years to come, via 15- or 20-year bonds. Those maturities may make sense in part because some companies are freezing defined-benefit pensions, meaning the duration of their liabilities will shrink.

Priya Misra, head of global rates strategy at TD Securities (USA) LLC, also a primary dealer, has another suggestion. Many investors only want ultra-long Treasuries to split them into principal- and interest-only securities, so Treasury should bypass Wall Street dealers and just issue 50-year principal-only obligations themselves.

“Coupon strips end up getting warehoused on dealer balance sheets, which is getting more expensive by the day,” Misra said. Issuing principal-only could save Treasury money because “you won’t have to deal with these leftover parts of the bond that nobody really wants.”

The consideration of ultra-long debt isn’t new. In its August 2014 refunding questionnaire, Treasury asked dealers whether it should consider a maturity greater than 30 years.

The Treasury Borrowing Advisory Committee, a group of professionals from investment funds and banks that offers recommendations to department officials, has also discussed ultra-long issuance.

Minutes from its April 2009 meeting show members saying such issuance “did not serve any purpose,” and Treasury’s goals would be better served through prevailing offerings. The committee revisited the issue in 2011, when participants cited demand from entities with longer liabilities and said Treasury should consider adding instruments that might be attractive to pension funds.

All 15 members of the committee, known as TBAC, either declined to comment or didn’t return requests for comment through company spokesmen. Rob Runyan, a Treasury spokesman, referred to Singh’s speech about the department’s view on ultra-long issuance. Trump transition officials didn’t respond to an e-mailed request for comment.

“It’s something that’s come up over and over again,” said Cloherty at RBC. “When you get a new senior person at Treasury, they want to do something somewhat splashy. Then the issue comes up, and it gets tabled.”