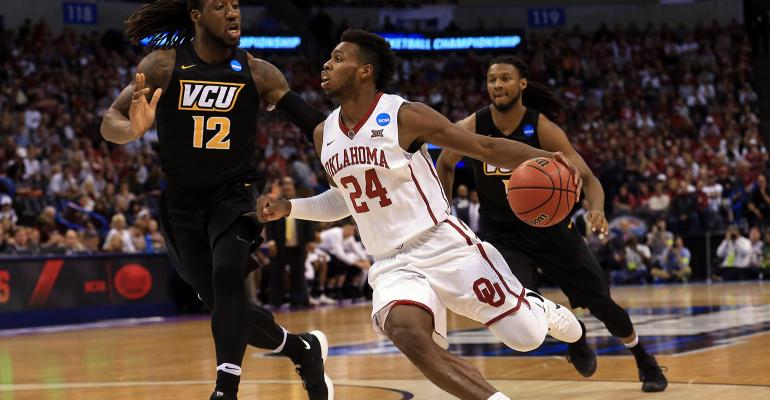 <p>Buddy Hield (24) and the Oklahoma Sooners, will face the Texas A&amp;M Aggies in the Sweet 16 of the NCAA Men&#39;s Basketball Tournament.</p>
Investment>Fixed Income

(Bloomberg) -- Before the University of Oklahoma and Texas A&M University basketball teams square off in the Sweet 16 on Thursday, they’ll be competing for bond investors’ money.

Texas A&M plans to begin issuing $418 million of federally taxable debt as soon as Monday, data compiled by Bloomberg show. The deal would come a day after the school’s men’s team came back from a 12-point deficit with less than a minute to play in regulation to beat Northern Iowa in double overtime, an unprecedented feat.

Oklahoma’s board of regents also plans to borrow as soon as Monday with a $75 million tax-exempt bond sale. Behind 36 points from Buddy Hield, the Sooners on Sunday advanced to face the Aggies on Thursday for a spot in the Elite Eight.

As higher-education institutions grapple with limits on raising tuition, the pool of graduating high-school seniors shrinks and students balk at taking costly loans, universities have a history of capitalizing on high-profile athletic achievements to issue bonds. Standard & Poor’s has said that while March Madness success might not mean an instant credit boost, it does give colleges “a leg up” in an era of heightened competition.

Clemson University sold tax-exempt debt in December after earning the No. 1 ranking in the College Football Playoff. Bonds due in about 10 years priced to yield 2.2 percent, for a spread to AAA munis that was less than similarly rated revenue securities.

During March Madness in 2014, the University of Connecticut priced $220 million of debt as its teams advanced to the Final Four of the men’s and women’s national college basketball tournaments. Both were crowned national champions. While UConn’s men’s squad fell to top-seed Kansas on Saturday, its No. 1 women’s team looks to move on Monday against Duquesne.

Proceeds from Texas A&M’s offering will provide funds for construction across its school system and refinance some other obligations, according to offering documents. Oklahoma will look to take advantage of tax-free interest rates near 50-year lows to refund securities that financed projects on its main campus in Norman.

Oklahoma is the No. 2 seed in the NCAA Tournament’s West region and Texas A&M is the No. 3 seed. The victor will face the winner of the Oregon and Duke matchup.

(An earlier version of this story incorrectly stated the year of Connecticut’s victory.)