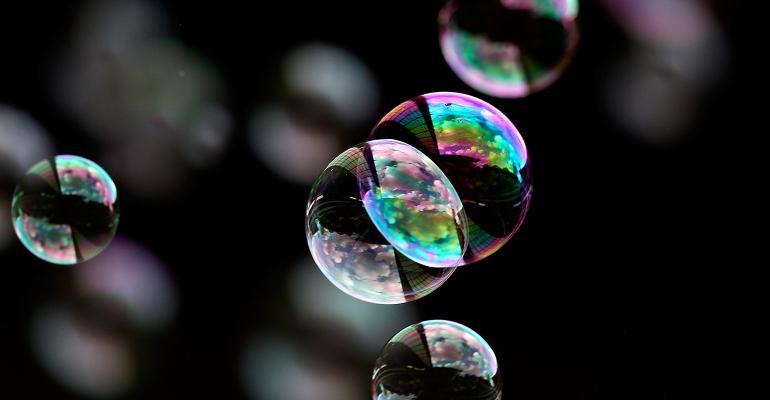 A number of markets show not only elevated valuations, but also irrational investor behavior.

(Bloomberg Prophets) --Investors face a conundrum: The world is experiencing a record synchronous growth phase, but an increasing number of assets are becoming overvalued just as fundamental risks lurk in the background. Should investors continue to dance to the tune of central bank stimulus and low volatility, or prepare to exit?

What appears to be a goldilocks economy could in actuality conceal a low volatility trap, a situation where excessive monetary stimulus keeps asset prices rising and volatility low across markets even though real economy risks are rising. On one hand, central bank stimulus directly lowers risk premiums and volatility in rates and credit markets, pushing investors into riskier assets to generate sufficient returns. On the other hand, politics have become less stable as inequality rises, as the recent elections in the U.S., U.K. and Europe show, and the number of geopolitical hotspots continues to rise. And yet, markets continue threading higher and volatility remains at record low. A prolonged environment of low volatility and low interest rates can promote asset bubbles, as European Central Bank President Mario Draghi said a few days ago. A number of markets show not only elevated valuations, but also irrational behavior on the part of investors, including a suspension of traditional valuation models, an increase in trading volumes or "flipping" in the hopes of quick gains, and financial engineering. Potential bubbles can be found in emerging-market debt, technology stocks, U.S. high yield bonds, some sovereign debt, cryptocurrencies, properties -- even art and collectibles. It is becoming clearer to economists and central bankers that even though we may be experiencing a long phase of growth, stretching the cycle with monetary stimulus inspired by crisis-era toolkits may be bringing several collateral effects. These include not only asset bubbles, but also a worsening of wealth inequality and a misallocation of resources.

Persistent low interest rates in the past have helped to roll forward an increasing amount of private and public debt to future generations, but this is no longer working. Economic fundamentals are different from the post-war period. Technology is deflationary. Demographics are no longer a tailwind, as there are fewer young people able to carry a higher debt burden in the future. The generation of so-called millennials is the first that will likely be poorer than their parents in the post-war period. Productivity is low as the economy suffers from hysteresis: a financial boom-bust cycle that can leave large swathes of the workforce out of the job market.

The longer the debt cycle, the longer companies and workers develop business and skills in leverage-heavy sectors (e.g. finance, real estate, energy), the deeper the scars when the bust comes. Often the misallocation is so large that low rates are necessary to keep people in their jobs: zombie companies that would otherwise fail continue to be in business, refinancing at near-zero interest rates in bond markets. Over time, this can reduce the rate of adjustment in an economy, and its workforce, toward new business models.

There is also corporate and social inequality to consider. Low rates have put large bond-issuing firms at an unfair advantage against small businesses reliant on lender financing, in some cases encouraging oligopolies. Corporate inequality and concentration is in theory an incentive for new firms to compete and reach the top, but can become vicious if the top firms keep their position through lobbying and government subsidies. Social inequality goes hand in hand. With central bank quantitative easing boosting asset prices, asset owners have benefited more than income earners. Those who bought $100,000 in S&P 500 Index stocks in 2009 now own about $300,000, while an average worker still earns the same salary.

Asset bubbles, resource misallocation and rising corporate and social inequality can reduce the potential growth rate of an economy. It is no wonder that inflation rates fail to rise despite eight years of loose monetary policy. In fact, the Bank for International Settlements has provocatively argued that low interest rates may be part of the cause, not the remedy, for low inflation. Yet exiting QE has proved to be difficult, and the global amount of QE purchases now stands at more than $20 trillion. Even with policy rates rising in the U.S., Canada and U.K., financial conditions remain loose. Navigating this environment is no easy challenge. First, investors should avoid the most overvalued assets, where irrational behavior is evident. Second, they should focus on what’s unloved and still relatively inexpensive, including European periphery sovereign, bank debt and equities. Finally, they should keep liquidity high and use hedges against a rise in interest rates and volatility. Ten years ago, just before the crisis, former Citigroup CEO Chuck Prince said investors should “keep dancing until the music stops.” Today, we are still dancing, but much closer to the exit door.

Alberto Gallo is partner at Algebris Investments and portfolio manager for the Algebris Macro Credit Fund.