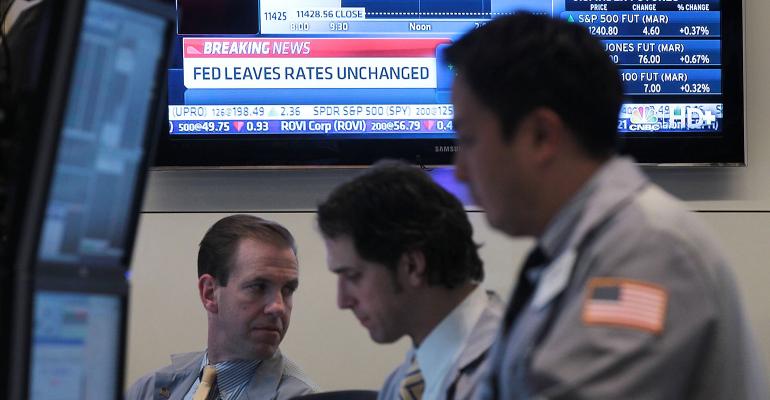 Low Interest Rates Will Be Around for a While

(Bloomberg View) -- When I talk to friends in asset management, I often hear them express a deep, gnawing worry about low interest rates. Fears that low rates would spark inflation, or cause governments to default on their debt, seem to have receded. I don’t hear many people talk about a “bond bubble” anymore. But one big concern won’t go away -- the idea that low rates will cause financial instability.

The idea is that low rates encourage excessive risk-taking, in the financial world and possibly the business world as well. Awash in a sea of cheap money, asset managers will bid up the price of financial assets well above their sustainable values. They will reach for yield, funding overly risky projects in a desperate attempt to deliver returns that meet their investors’ high expectations. All of this will result in a crash -- stocks and real estate prices will plummet back to sustainable levels, and risky projects will fail en masse, leading to a recession.

This scenario can’t be ruled out, of course -- in the financial markets, almost nothing is impossible. But I’m skeptical. The clearest reason is the historical record. Japan has had interest rates at or near zero for two decades now, and there has been no sign of disaster in its financial markets. Stock and home prices have not performed well there, it’s true, but there’s been little sign of a reach for yield, risk-taking remains low and there have been no big bubbles. In other words, Japan’s case makes it obvious that low rates don’t always lead to financial instability.

What is it that allows rates to hover around zero indefinitely without causing investors to do bad things with cheap money? It depends on why rates are low in the first place. If money is cheap because central banks are using their powers to keep rates lower than what the market would bear on its own, it stands to reason that investors will take cheap money and invest it in riskier things than they otherwise would. But if rates are low because of natural forces in the economy, and central banks actually have little to do with it, then there’s no reason businesspeople would be taking extra risk.QuickTake Normal Interest Rates

Interest rates are a price -- the price of future money, in terms of today’s money. In the short term, central banks can push that price around by buying and selling bonds. If they distort the price, we can expect those distortions to show up elsewhere as higher inflation and financial bubbles. But the price can also be affected by a number of longer-term factors. For example, if people or companies become more patient, valuing the future more relative to the past, we should expect interest rates to decline, since people wouldn’t need as much of an incentive to save money.

Probably the most important long-term determinant of the interest rate is just the pace of economic growth. Interest payments are a claim on tomorrow’s economic output. If that output grows quickly, rates will tend to be high. But there are several forces pushing down growth in our modern world. Lower growth means lower rates, even without any central bank action.

One force holding back the economy is slower productivity growth. Education levels are increasing much more slowly than they used to, and some economists argue that technology is improving at a permanently slower rate. Another factor is gender -- women in developed countries have mostly entered the workforce by now, so that boost is over.

But the most powerful force is probably just aging. Developed countries are have gotten much older, and with fertility rates below replacement, most continue to do so.

A team of economists at the Federal Reserve has an interesting new paper about this. They use a fairly simple economic model, along with demographic projections, to forecast how U.S. growth and interest rates will change in the next few decades. They find that demographics --the retirement of the baby boomers and declining birth rates --are a strong headwind for both.

Here is a graph of the authors’ projection:

The model the authors use is a simple one, and involves lots of assumptions. But demographic projections are pretty accurate. Note that the authors find that total factor productivity growth doesn’t make much of a difference -- even if technological progress isn’t slowing down, demographics are the much more important factor. The black line on the graph represents what would happen if productivity grew at its historical average rate, but it really doesn’t alter the baseline projection at all. All of their forecasts show rates lower than 0.5 percent. Those are just projections, of course -- all kinds of things could change, including faster productivity growth, or a change in how much people want to save. But the clear message is that rates probably are going to stay pretty much where they already are.

So this means that fears of bubbles, financial instability and excessive risk-taking are likely exaggerated. The world’s economies wants lower rates all on their own. The Federal Reserve and other central banks aren’t creating much of a distortion. Lower interest rates probably aren’t a looming financial threat and they’re here to stay.