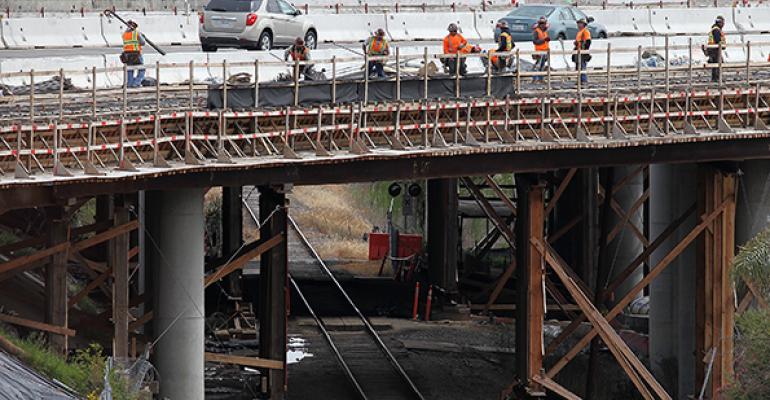 <p>Overseas funds are contributing to the flood of money coming into the $3.7 trillion municipal market where local governments borrow to build roads, bridges and schools.</p>
Investment>Fixed Income

In the Lands of Negative Yields, Even U.S. Municipal Bonds Lure

(Bloomberg) -- In 1989, Japanese investors bought Rockefeller Center. Now, they’re plowing into the market that finances the subways underneath.

Faced with negative interest rates in their own countries, foreign banks and pension funds are looking increasingly toward municipal bonds, a bastion of buy-and-hold investors seeking U.S. income-tax breaks.

Money managers including ColumbiaThreadneedle Investments and Western Asset Management Co. say they have set up accounts for Asian and European investors who are buying U.S. state and local-government debt. In November, Shinsei Bank Ltd. and Western Asset, a unit of Baltimore-based Legg Mason Inc., started a private fund that invests in municipal bonds for Japanese financial institutions.

“We have investors coming from around the globe looking and saying, ‘Here’s a security that will offer us a decent yield without all the credit risk,’” said Robert Amodeo, head of municipals in New York for Western Asset Management, which oversees about $440 billion.

With central banks in Japan and Europe holding interest rates below zero in a bid to boost their moribund economies, overseas funds are contributing to the flood of money coming into the $3.7 trillion municipal market where local governments borrow to build roads, bridges and schools. That’s adding to a rally in the price of the bonds, whose low default rates and lack of volatility make them an alluring alternative to U.S. corporate debt.

Other assets have seen bigger price swings amid volatile oil prices and building concern about the slowdown of the Chinese economy. During a shift away from corporate junk bonds this year, for instance, the extra yield investors demanded to hold them instead of top-rated debt reached a more than four-year high of almost 9 percentage points in February. The gap has since narrowed by about 2.5 percentage points as prices recovered.

Since overseas firms don’t benefit from the U.S. income-tax exemption given to interest payments from most municipal bonds, they’ve focused largely on the $466 billion of taxable debt that carries higher yields. Those securities maturing in 10 years yield 2.44 percent, 0.74 percentage point more than Treasuries. Similarly dated German bonds yield 0.12 percent, while in Japan they pay -0.12 percent, meaning it costs money to own them.

Taxable municipal bonds have outperformed over the 3, 5 and 10 years that ended Dec. 31, according to data from Barclays Plc. The bank’s index of the securities had a total return of 6 percent per year over the past 10 years, compared with 4.5 percent for its broader measure of Treasuries, corporate debt and other U.S. investment-grade fixed-income instruments.

The international buyers are contributing to a flood of cash that has lifted municipal-debt prices and held yields near their lowest in half a century. Some of the investments have been made through mutual funds, said James Dearborn, head of tax-exempt securities at Boston-based ColumbiaThreadneedle, which has $464 billion under management.

Municipal bonds are a haven from financial-market turmoil because more than half of it is owned by individuals typically more interested in the tax-free interest than capital gains. As a result, they tend to hold until maturity, preventing the periodic bouts of selling that whipsaw prices of other securities.

“They’ve been largely insulated from a lot of the volatility in the markets,” said Dearborn.

International investors previously emerged as big buyers of Build America Bonds, which were created by the federal government to boost the economy after the onset of the recession. States and local governments issued almost $200 billion of the taxable securities, whose interest payments were subsidized by the U.S. Treasury. By the time the program lapsed at the end of 2010, foreign investors held about $72 billion of municipal debt, up $21 billion from two years before, according to the Federal Reserve. By the end of 2015, they owned $85 billion.

Bond-fund managers are cultivating the interest abroad. In March, Eaton Vance Management co-sponsored an institutional investors forum in Tokyo that drew more than a hundred representatives of banks, funds and pensions. Cindy Clemson, Eaton Vance’s co-director of municipal investments, was among the speakers.

“Certainly in the Japanese climate, yield is at a premium,” she said.

Shinsei and Western Asset last year started a yen-denominated fund, with about 8 billion yen ($65 million) at the time, targeted towards revenue bonds, which finance projects such as toll roads, water and sewer systems or airports. The fund invests in those with an A rating, comfortably within investment grade, or higher.

“We’ve received a great response to our U.S. municipal bond funds,’’ Akiko Suda, general manager of product planning at Tokyo-based Shinsei’s asset-management business, said in an e-mail. “The funds are highly rated and spreads are comparatively deep. We have strong expectations for the investment balance to grow further here in Japan.’’

ColumbiaThreadneedle, a unit of Ameriprise Financial Inc., got its first mandate from foreign investors about a year ago, Dearborn said. The firm manages “hundreds of millions of dollars,” in separate accounts or through its mutual funds, he said. ColumbiaThreadneedle is now seeing interest from Europe.

“This is a brand new thing for us,” Dearborn said.