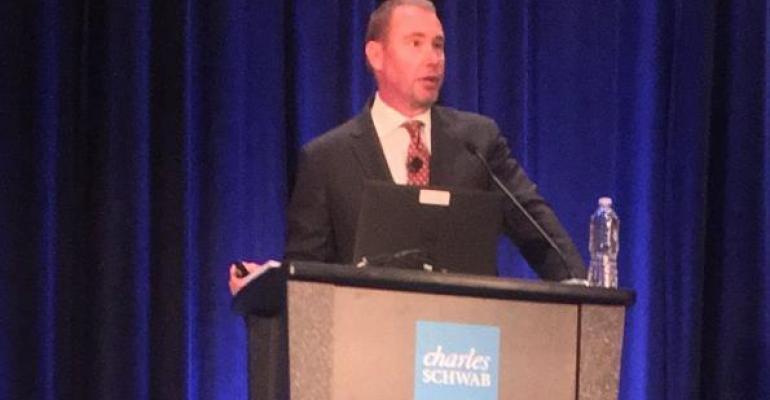 Jeffrey Gundlach: Why the “Rates Will Never Rise” Argument Doesn’t Hold Up

“One thing I’ve learned is that in the investment business, when you hear the word ‘never,’ it’s about to happen,” said bond guru Jeffrey Gundlach to a room full of advisors at Schwab IMPACT.

Bond guru Jeffrey Gundlach is known to make big, bold bets. In 2014, he predicted that interest rates would fall even further, and that bet paid off—big. But recently the DoubleLine Capital CEO has turned bearish on bonds. During a presentation to financial advisors at Schwab’s annual IMPACT conference this week, Gundlach said all the evidence is pointing to an unfriendly bond environment, one in which interest rates, no doubt, will continue to rise.

“In July, people came on TV and I actually heard the phrase, ‘rates can never rise,’” he said. “One thing I’ve learned is that in the investment business when you hear the word ‘never,’ it’s about to happen.”

Indeed, rates have risen 50 basis points from the high of 1.82 percent, and many of the arguments supporting low rates don’t hold up anymore.

“I invented many of these arguments, but they’re getting a little bit old because we’re getting to a point where the environment that supports the rates-can-never-rise argument—should it continue—will actually cause a change in fiscal and monetary policy,” Gundlach said.

With negative interest rates and quantitative easing nearing their ends, it's become increasingly apparent that neither policy worked. For example, the Japanese yen has strengthened since the Bank of Japan went negative. The European Central Bank’s efforts have not lead to weaker currencies, outperformance of stock markets or inflation.

“All it has done is to hamper the banking system,” Gundlach said. “The evidence is building that these negative interest rates—if you keep them there long enough, it will really be fatal to the health of your banking system.”

Japan has talked about steepening the yield curve, and its banking sector has greatly underperformed the Tokyo stock market broadly. The same thing has happened in Europe.

It’s getting to the point where the evidence is piling up that it’s not working and you have to try something else, he said.

Gundlach showed a chart of economists’ GDP growth forecasts in the U.S. going back to 2006. Since 2011, every year it has been the same: Economists forecast somewhere around 3 percent GDP growth, then that is downgraded as the year goes on.

Janet Yellen, chair of the Federal Reserve, did just that in her recent guess.

Yellen has said maybe we should run a high-pressure economy, which functions at 4 percent or lower unemployment rate. This is not bond-friendly.

In 2013, Gundlach argued for buying U.S. bonds; they’ll do well because they’re cheaper than other developed countries. The problem with that argument now is that it’s been in place for two years and it hasn’t worked.

The argument also ignores the fact that foreign investors are also bearing currency risk. The volatility for a Japanese yen investor versus the dollar is probably 10 times the volatility of interest rates. And once you hedge out that currency risk, you earn nothing. On top of that, foreign investors have not been buying U.S. bonds; sovereign wealth funds—the biggest buyers of U.S. bonds—are sellers now.

Take Deutsche Bank, whose stock price got as low as 10 euros.

“There’s something about single-digit stock prices on major banks that get people worried, particularly if the bank has the name of the country on it. Remember BofA back in 2008–2009?”

That would cause a collapse in the European banking system. We’re at the bottom of the ninth inning, Gundlach said, and governments will pivot on these policies because, if they don’t, the banking system will implode.

The Fed is going to shift from monetary policy to the experiment of fiscal policy. If you look at the occurrences of the phrase “fiscal stimulus” in the media a year ago, it was zero. Now, it’s greater than it was at the height of the financial crisis.

Fiscal stimulus may or may not boost the economy. You could build airports, bridges and walls, and put people to work. But if GDP growth goes higher, that would be bond-unfriendly because you’d have a high supply of bonds. And that’s coming at a time when higher supply is on its way anyway; Medicare, Obamacare and Social Security have been in a quiet period.

"When 2020 comes, we're going to have to make decisions about what we're going to do about collecting taxes and paying for the promises we've already made with entitlements,” Gundlach said.

Another indicator that rates will rise is the Economic Cycle Research Institute’s future inflation gauge. The index has been stable at around 100 for years, but all of a sudden, it’s moving higher.

At the end of 2013, Gundlach was one of the biggest bond bulls, and none of these indicators were turning. “It’s clearly showing something is changing.”

The future inflation gauge tends to move the same as the expectations for the bond market, and now they’re diverging in a major way.

“This strongly suggests to me that the bond market is being influenced by technical factors in the TIPS [treasury inflation-protected securities] market.”

If you look at PriceStats, which collects online prices to provide daily inflation updates, in 2014 it was falling, a reason to be supportive of bonds. Now, it’s rising.