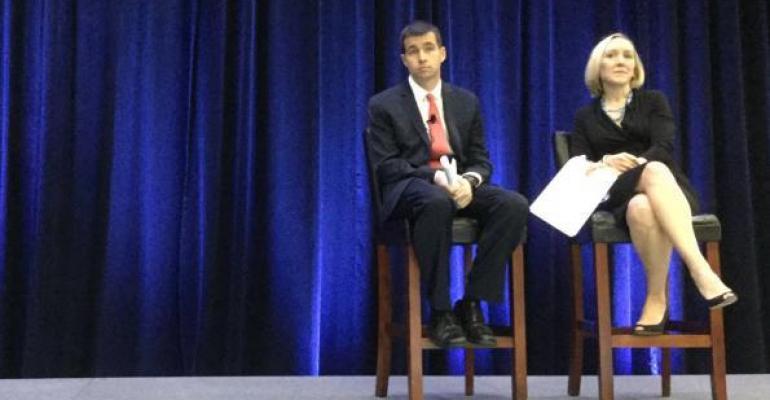 Schwab’s chief technology officer predicts financial services firms will connect to the “rewired” investor with chat bots, virtual reality and machine learning, and that “we’re going to move past investment management as a focal point in five years.”

John Bellows, a portfolio manager at Western Asset, says that the market consensus that the Federal Reserve will hike rates in December is misplaced. “You can be less convinced it’s going to happen,” he said during a panel discussion at Schwab’s annual IMPACT conference in San Diego on Wednesday.

This is despite the fact that Federal Reserve Bank of New York President William Dudley has been on a media campaign signaling a rate rise before the end of the year. “I’m reminded of the scene from Hamlet. Methinks Dudley protests too much,” Bellows said. “He’s working hard to convince you of this. Maybe he’s not so sure himself. The foundations are much more shaky.”

Consider the unemployment rate. It’s been falling a percentage point annually over the past five years, but has, over the past 10 months, gone only sideways at around 5 percent. Gross domestic product growth is sluggish, as Federal Reserve Chair Janet Yellen herself has observed. Inflation expectations over the past few years have not materialized and remain below the Fed’s target rate of 2 percent. Inflation threats are “the dog that hasn’t barked,” Bellows said, and given stagnant wages and higher productivity, “the risks are on the downside."

Adding to the skepticism is the fact that the Federal Reserve, despite adopting a public tone of progress, has consistently revised downward their expectations for future rates. “She wants you to think we're moving forward, but in reality, they’re moving backward,” he said. “It’s like Janet Yellen doing the moonwalk."

For a fixed-income investor, that means bond yields are destined to remain low, supported by sluggish economic growth, low inflation and his prediction of continued central bank accommodation. In the U.S., fixed income has had a good run in the past year—high-yield bonds have a total return of 15 percent year-to-date and investment-grade debt a 10 percent return. To Bellows, domestic corporate debt prices are high. “We’ve taken positions down because of that price movement,” he said.