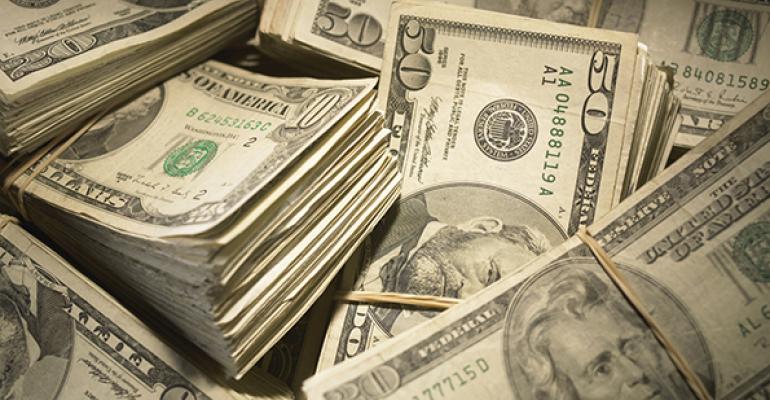 It's Raining Cash and the Flood Is Swelling Bond Danger

Companies and consumers that eventually become insolvent will have fewer assets available to repay their growing mountain of obligations.

(Bloomberg Gadfly) --The good news for bullish debt investors is that riskier assets will probably keep rallying in the near term.

The bad news is that the longer the rally continues, the more these investors stand to lose of their principal investments down the line.

That's because companies and consumers have substantially boosted their leverage in the past few years as central bankers worldwide flood the market with cash to suppress borrowing costs. This implies lower recoveries in the future, according to Matthew Mish, an executive director in global credit strategy at UBS AG. In other words, companies and consumers that eventually become insolvent will have fewer assets available to repay their growing mountain of obligations.

This is already happening on a small scale in the U.S. auto industry, which has been suffering recently from falling sales and lower used-car values. Consumers borrowed more money than they could repay to buy new cars and trucks and are now defaulting on those loans at an increasing pace. Ultimate recoveries have declined to levels not seen since 2009, amid the worst financial crisis since the Great Depression.

U.S. companies haven't truly been tested yet on a broad-based level with the exception of energy and retail corporations, which have faced some issues unique to their sectors. American companies have generally added debt at a record pace, leading to historically high leverage ratios. This leaves senior debt investors with a historically low cushion protecting them from losses in a default, as Mish pointed out on Thursday in a report that was co-written by Stephen Caprio of UBS.

This is important to remember as policy makers around the globe try to ignite growth and inflation by expanding their asset purchases. This is still happening despite efforts by the Federal Reserve to lift benchmark rates a bit and reduce its balance sheet as soon as later this year. The European Central Bank and Bank of Japan have taken over the stimulus game and are increasing their assets drastically.

Both Europe's and Japan's central banks now have bigger balance sheets than the Fed. In many ways, the Fed's small attempts to tighten borrowing conditions in the U.S. have been offset by loosening measures taken overseas. As Mohamed El-Erian, Allianz SE's chief economic adviser, said on Friday in a Bloomberg Television interview, the continuing gains in riskier bonds and stocks is part of a "liquidity trade." It's based on optimism about central-bank stimulus and corporate profits, he said, and not a vote of confidence in the underlying strength of the economy.

Some analysts shrug off the growing amount of corporate debt by saying that borrowing costs are so low that it's less damaging for companies' potential profitability. Perhaps that's the case now, but investors will certainly demand much higher premiums to own these notes in years to come should the economy weaken. And central bankers will have less ammunition to lower rates, given how low they already are. Meanwhile, it's likely that there'll be a downturn in the next five years, with Pacific Investment Management Co. putting the chance of a recession at 70 percent. So perhaps markets can heedlessly continue the party for now, but the longer it goes on, the worse the hangover will be down the line. This is important for investors to remember as they decide which bonds to buy and determine what assets are backing them up.