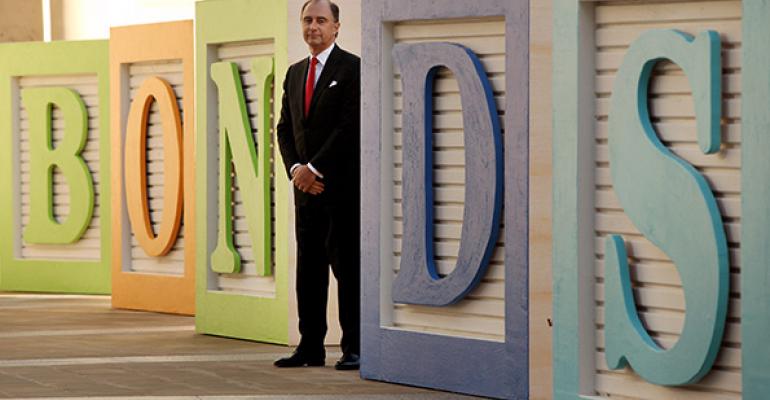 (Bloomberg) -- There’s no shortage of demand in the $100 trillion market for global debt, as investors crowd into corporate and long-term sovereign obligations to steer clear of negative yields.

Yield-hungry bidders are snapping up government bonds. Auctions of long-term debt by the U.S., Spain and Portugal all drew strong demand Wednesday, with the Treasury sale seeing unprecedented appetite from one class of investors. Buyers are also clamoring for company bonds, in a week that may be the busiest this year for corporate borrowing in the U.S. and Europe.

The driving force behind the bond binge is the growing universe of negative-yielding securities, which has expanded above $9 trillion since the European Central Bank and Bank of Japan cut interest rates below zero. JPMorgan Chase & Co. predicts that with the supply of debt falling, conditions in the global bond market will be so favorable in 2016 that record-low yields are probably in store.

“In a yield-starved world, where a significant percentage of global government debt is yielding zero or something less, investors are reaching for yield by extending maturities, buying credit, or some combination thereof,” said Colin Lundgren, head of fixed income in Minneapolis at Columbia Threadneedle Investments, which managed about $470 billion as of Dec. 31.

On the one hand, the reach to pad returns shows that central banks’ efforts to push investors into riskier investments have been successful. But the phenomenon also means buyers are increasingly vulnerable to corporate defaults, or to rising interest rates. For the latter, that’s because debt with higher duration, such as obligations with longer maturities, suffers steeper losses when interest rates rise.

The broad global bond market’s effective duration reached an all-time high this month, according to Bank of America Merrill Lynch Indexes. That leaves investors at risk if views on the path of the Federal Reserve change. Traders are essentially counting out another Fed interest-rate increase for the time being -- futures don’t fully reflect the next hike until August 2017, according to data compiled by Bloomberg.

“In the very near-term, rightly or wrongly, no one is really afraid of the Fed,” said Lundgren. It’s increasingly important to “do the research and make sure there is value by extending maturities or buying credit. This too shall pass, but maybe not anytime soon.”

The demand is buoying government borrowers. Fund managers, global central banks and other institutions piled into an auction of 10-year U.S. debt Wednesday. Those who bought through primary dealers, classified as indirect bidders, picked up a record share of the sale. The benchmark notes were sold at the lowest yield in more than three years, at levels that firms including Goldman Sachs Group Inc. deem expensive.

“There’s clearly a lot of demand any time you can get something with positive yield,” said Kathy Jones, chief fixed-income strategist at Charles Schwab & Co. in New York. “If you’re a buy-and-hold investor, you might as well -- every chance you get.”

A pair of European countries took the opportunity to lock in low long-term borrowing costs. Portuguese bonds outperformed most of their euro-area peers on Wednesday after the nation exceeded its target at a sale of 10-year securities.

An auction of 30-year Japanese debt is scheduled for Thursday. The bonds were called the “most overpriced security on the face of the Earth” by hedge fund executive Adam Fisher -- yet investors have continued to buy at auction, since all Japanese debt maturing in 15 years or less has negative yields.

In the U.S., companies with investment-grade ratings sold $7.8 billion of debt Wednesday, bringing total issuance past $41 billion this week. It’s on pace to approach or even exceed the $63 billion raised in the five-day period ended Jan. 15, the busiest week this year. In Europe, American companies including Johnson & Johnson and Kraft Heinz Co. brought multibillion dollar deals in euros, putting corporate debt issuance there within reach of a weekly record.

“There is a lot of cash ready to be put to work,” said David Brown, head of global investment-grade credit at Neuberger Berman, which manages $243 billion. “People aren’t afraid to spend money on these new deals right now.”