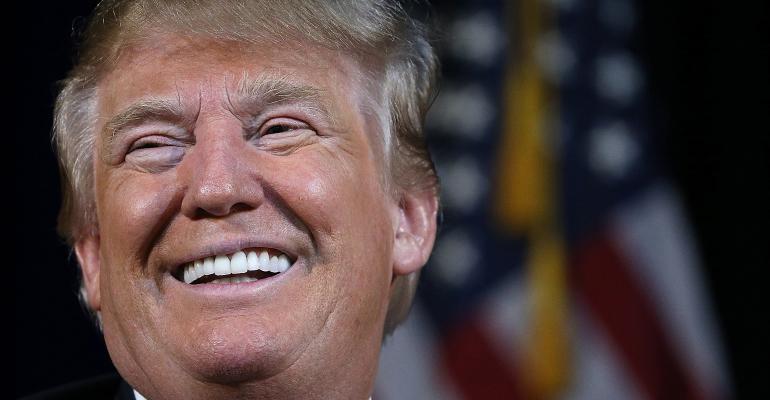 He promised us “Brexit plus plus plus,” and that’s what he delivered on the night. Against the polling, against the betting odds and against market sentiment in the immediate run-up to the elections, Donald Trump will be sworn in as the U.S. president in January 2017. He will also have the backing of a Republican Congress, giving him far greater policy scope than his predecessor. So what are the immediate implications for the economy, policy and financial markets, and how might things look over the longer term?

The short-term response from markets was predictable. We saw a move into safe havens as events unfolded on the night, with the Japanese yen and gold initially up sharply. In contrast, assets most closely associated with some of Trump’s more anti-globalization and protectionist views have been selling off, with the Mexican peso in the lead. The immediate question was, how long would this globalized risk-off move last? After all, if we take Brexit as our template—and there are similarities, in both the nature of the insurgent vote and the fact that the result won’t be “implemented” until Trump takes office next year—then the obvious answer seemed likely to be “not long.”

Indeed, that is broadly what came to pass—and on an even faster timescale than Brexit. With markets looking for reassurance, as well as greater detail and consistency of message than was at times apparent during the race for the White House, Trump’s acceptance speech provided the required balm. Its message on infrastructure spending—“We are going to fix our inner cities and rebuild our highways, bridges, tunnels, airports, schools, hospitals”—provided a focus for market sentiment and reaction. As a result, attention over the past few days has focused on three areas: fiscal and monetary policy, inflation and the likely extent of "de-globalization" under President Trump.

Taking monetary policy first, the U.S. Federal Reserve looks set to raise interest rates in December, given the broadly positive market response to Mr. Trump’s infrastructure message. Looking ahead to 2017 and beyond, markets are also gearing themselves up for further rate rises ahead. After all, Mr. Trump’s campaign criticisms of the effects of the Fed’s loose policy stance suggest that he may appoint “hawks” to the two empty posts on the Fed’s rate-setting committee. And a switch to fiscal stimulus at a time when wage and price pressures are already showing signs of acceleration (though from a low base) and spare capacity is limited is also concentrating market minds. In addition, the introduction of trade tariffs and immigration controls could damage the U.S. economy’s long-term growth prospects, with potential inflationary consequences.

On the fiscal side, Trump has some clarifying to do. During campaigning, the president-elect not only committed to infrastructure spending, but also promised tax cuts of up to $10 trillion. Both could be scaled back, though a move to greater reliance on fiscal rather than monetary policy would fit with the prevailing mood among international institutions and many investors. On the other hand, if Mr. Trump does not take the opportunity to tone down his campaign musings on the possible writing down of U.S. overseas debt obligations, the risk premiums on U.S. assets could rise, particularly if combined with worries about political interference with the workings of the Fed.

And then there is the issue of “de-globalization.” Severely restricting immigration, increasing trade tariffs and tearing up free trade agreements could have substantial negative effects on current and potential future U.S. growth. However, the magnitude will depend on how far the reality matches up to the campaign rhetoric. A “soft” Trump scenario could involve the introduction of 10–15 percent tariffs on Chinese and Mexican goods, matched by retaliatory tariffs on U.S. exports to those economies. If this is combined with an increase in the deportation of illegal immigrants and a temporary confidence shock, we would anticipate a slowdown in the U.S. economy as domestic demand weakens. In a “hard” Trump scenario, tariffs would be higher and geographically more widespread, alongside a larger deportation push. The combination of heightened uncertainty, faltering exports, rising consumer price inflation and slower population growth would drag U.S. gross domestic product (GDP) growth down more sharply than in the “soft” scenario and would also have more negative, and more widespread, implications for the U.S.’s trading partners.

On the evidence so far, Trump is striking a more conciliatory tone than during his campaign. On this basis, we might lean towards a “soft” Trump outcome for now, but the detail and tone of announcements in the weeks ahead will be crucial. There are also a host of other questions that are less immediately in the markets’ focus, but are nonetheless important. What about the U.S.’s role in North Atlantic Treaty Organization (NATO) and its relations with countries normally less favored by the West (such as Russia)? What about the country’s own internal politics—what does this result say about the state of the two establishment parties and the views of the voting public?

Turning to market implications, a rise in certain risk premiums is hardly surprising given the lack of clarity around Mr. Trump’s policies. More certainty in the weeks and months ahead is likely to be welcomed. Investors are also likely to take a keen interest in the relationship between Trump and the Fed. Investors have confidence in Janet Yellen and the institution she chairs. Further attacks on the integrity and structure of the Fed are likely to be unhelpful to markets.

While weakness in certain riskier assets globally is what we might have expected given last week’s news, the outlook for two of the world’s most important assets is more nuanced. Both the dollar and U.S. Treasurys will balance an increase in perceived risk, and the potential increase in inflation, against the prospects for growth and the outlook for policy interest rates in the short term. Their respective paths will be important in setting the direction of all assets in the months ahead.

However, amid the many uncertainties that abound as we look forward, it is worth remembering that the United States remains a country where the rule of law is sacrosanct, where the demographics are relatively favorable and where there are broad and deep pools of capital. None of these fundamental features have changed as a result of last week’s events. For long-term investors, factors such as these will continue to be the ones that drive returns.

We entered the U.S. election period with balanced portfolios that were using a limited amount of the risk budget available to us. This felt appropriate, and continues to be so.

Lucy Carroll is the Chief Economist at Aberdeen Asset Management.