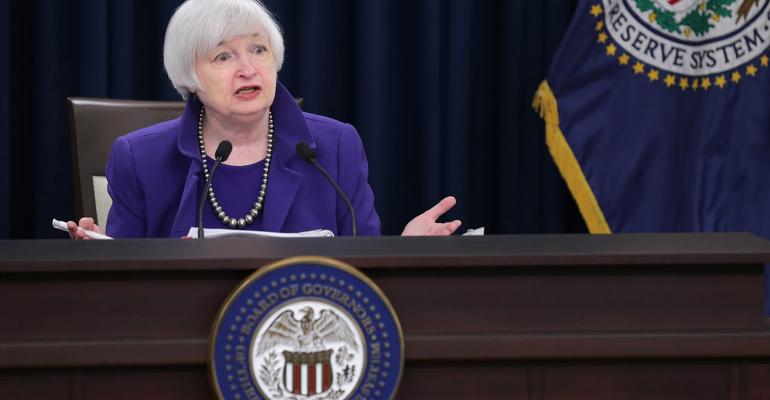 If the Fed Is Right, Then Markets Are in Trouble

Meeting the 2 percent inflation goal could signal a downturn.

(Bloomberg Prophets) --Defying the best efforts of central banks over the last nine years, inflation has yet to rear its head. Although many would welcome inflation growth above 2 percent, the markets are flashing warning signs that a return to pre-crisis levels might not produce the expected results. Instead, such an increase could bring volatility, which is often a code word for falling markets.

On Jan. 25, 2012, the Federal Reserve aimed for 2 percent core personal consumption expenditures as a desired level of inflation. As the chart below shows, inflation has mostly remained well below this target. That was bad timing on the Fed’s part. The Fed’s inability to create inflation has flummoxed Chair Janet Yellen, who led the last meeting of her tenure on Wednesday. As the following two citations show, the "data-dependent” Fed chief was reduced to the words “guess,” “expect” and “believe.”

My best guess is that these soft readings will not persist, and with the ongoing strengthening of labor markets, I expect inflation to move higher next year.

The markets have also struggled to forecast inflation correctly. The chart below shows the U.S. 10-year inflation breakeven rate, or the market’s expectation for the average inflation rate over the next 10 years. Between 2010 and 2013 the market regularly thought inflation was returning, but it never did. A year ago, it also thought so, but that didn't happen, either. And the market thinks inflation is returning now. While subdued inflation has thoroughly confused many economists and traders, the markets are exhibiting some peculiar behavior about its eventual return that may give investors reason for pause.

The chart below shows a rolling six-month correlation between the implied volatility of various assets and U.S. 10-year Treasury Inflation-Protected Securities inflation breakeven rate. Equities (red), U.S. Treasuries (cyan), and foreign-exchange (orange) are seeing a swift end to their negative correlation between volatility and inflation expectations. To see the trend better, the next chart shows the average of the correlations depicted above. It is poised to move into positive territory for the first time since July 2007. In other words, higher inflation may bring with it higher volatility for the first time in almost 11 years. But the concern is that volatility is often a signal of declining markets. The relationship between inflation expectations and asset prices is also changing.

The next chart shows a rolling six-month correlation between stock prices and inflation.  It is falling, as would be expected when the Fed is tightening. The correlations are now heading toward zero. Should they too flip to negative, further increases in inflation expectations would coincide with lower returns on risk assets.

Proclamations of inflation’s triumphant return have been frequent in the last decade. So far, these have all been false alarms. Nonetheless, markets are once again sending that signal.

Throughout the post-crisis era higher inflation expectations have coincided with lower volatility and higher risk asset prices. We believe the assumption that this relationship continues explains why so many forecast, or want to see, inflation’s return. It signifies a strong and robust economy that financial markets should want. However, this relationship is on the verge of flipping. Higher inflation expectations may soon be a recipe for higher volatility and lower risk asset prices, as they were precrisis and especially in the 1970s to 1990s.

Central banks and traders should be careful what they wish for.