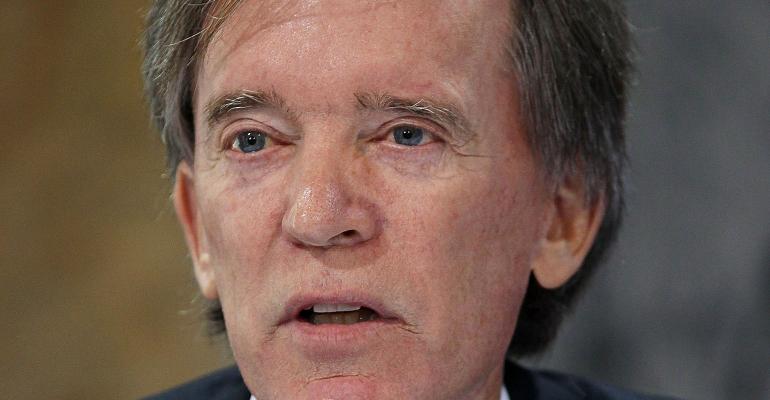 (Bloomberg) -- Bill Gross is recommending the Federal Reserve raise interest rates twice by as early as March. The market doesn’t expect that degree of monetary tightening even by the end of 2017.

Speaking in an interview on Bloomberg Television, the billionaire manager of the Janus Global Unconstrained Bond Fund called for the first hike at the Sept. 20-21 Federal Open Market Committee meeting. Futures imply about one-in-three odds of action then, even after hawkish comments by Chair Janet Yellen and her colleagues drove up short-term yields and consigned Treasuries to their worst month since June of last year in August.

“I would say ‘C’mon, let’s raise interest rates by 25 basis points in September,’ and ‘C’mon, six to nine months from now let’s do it again,’” Gross told Bloomberg’s Erik Schatzker on Wednesday. The money manager said the Fed and other central banks “are addicted to low and negative interest rates,” and need to break the habit even if it means economic pain now as opposed to later.

The two-year note yield was little changed at 0.81 percent, after a 15 basis-point jump in August. The spread with the Treasury 30-year bond yield rose two basis points to 144 basis points, after being as little as 140 basis points on Tuesday, the narrowest level since January 2008. Shorter-dated debt is more sensitive to the outlook for monetary policy.

Investors are awaiting a U.S. payrolls report Friday that Fed Vice Chairman Stanley Fischer has said will be key to how policy makers assess the recovery in the world’s largest economy. Employers added a net 180,000 new positions in August, according to the median estimate of economists surveyed by Bloomberg, following gains of more than 250,000 in each of the previous two months.

Gross said an increase of 150,000 or more positions in August should be enough to provoke Fed tightening this month.

“To me, that sort of cements it,” he said. “If those types of numbers, and perhaps a 3 percent GDP quarter, do not allow for an interest-rate increase, then what does?”

Fed fund futures signal just a 36 percent chance the central bank will tighten policy this month, and about 21 percent odds for two quarter-point increases by March, according to data compiled by Bloomberg.

The odds for one increase were as high as 42 percent last Friday after Yellen said in Jackson Hole, Wyoming, that the case for higher rates had strengthened. The probability of a single boost by year-end stands at 60 percent, with the calculation assuming the effective fed-funds rate will average 0.625 percent afterward.

Gross’s $1.5 billion Janus unconstrained fund has gained 5.5 percent in the past year, outperforming about 85 percent of its peers tracked by Bloomberg.