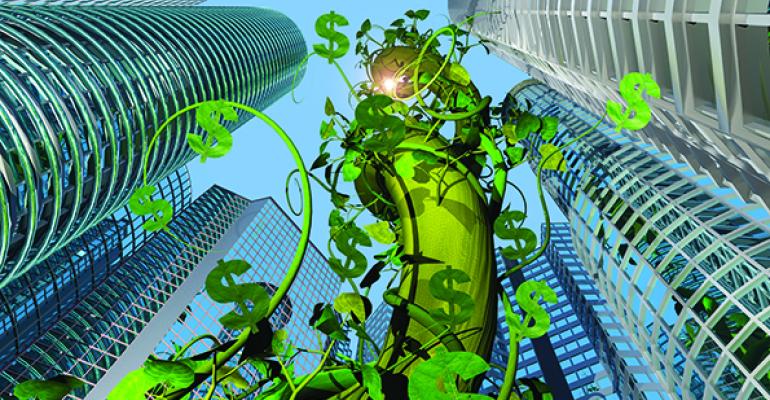 Green Bonds Are on The Rise, But Buyer Beware

Fixed-income SRI in the form of green bonds is on the rise, but beware the changing regulatory environment, a small market, and the potential for "green washing."

Green bonds are getting more popular, with both issuers and investors. In 2016, the value of new issues increased 120 percent from the year before to $93.4 billion, and analysts expect 2017 to be another record, according to a report from Moody’s.

The demand for this kind of debt, which generally is issued by governments or sovereign agencies to fund projects mitigating carbon dependence, has risen alongside a more general investor emphasis on socially responsible investing, or making investment decisions through a lend of a company's environmental, social or governance (ESG) factors, said Matt Orsagh, director of capital markets policy at the CFA Institute.

“Big fund managers have been ramping up ESG abilities and outreach for better practices—with equities in mind.” He added, “But, they are beginning to understand this isn’t just an equities story.”

Any entity that can issue a bond, can also issue a green bond. The concept is, however, relatively new. About a decade ago, the European Investment Bank issued the first official green bond, and for a number of years, super-sovereign entities, like The World Bank Group, were the predominant issuers of bonds labeled as “green.”

As of yet, there aren’t many funds—active or passive—that primarily or even partially invest in an assortment of bonds identified by issuers as green. Only one, TIAA-CREF Social Choice Bond Fund, which Morningstar gave a five-star rating, has reached scale, according to Moody’s. However, there’s been some significant growth in this space, and Moody's suggests it will continue as long as environmental issues remain a focus of sovereign actors. Consider that much of the new issuance of green bonds has come from China, based on its ambitious renewable energy programs, as well as momentum from the Paris Climate Agreement.

Are green bonds right for your clients? Experts suggest there are some important things to consider:

Getting Trumped
Actions of the new administration could prove fatal for certain projects or companies financed by green bonds.

“Make sure the purpose of the bond makes economic sense in and of itself,” she added.

It’s also important to take note of a bond’s recourse. Some green bonds are backed by individual projects and some are general obligation. So, while a company might largely seem insulated from regulatory changes, its revenue-backed bond for a solar project—that’s reliant on government aid—may not be as safe an investment as one would think.

Sizing-Up The Market
Compared to the overall global debt capital markets, green bonds are still small peas, only representing about 1.4 percent of total issuances, according to Moody’s; that could mean trouble.

“The biggest issue is the size of the market,” said Orsagh, as a lack of liquidity can make investing in these things difficult, as well as “headline risk,” or the concern that a negative story in the press about a particular green bond could disproportionately impact the entire market.

Not everyone agrees that market size is a problem.

“You have a rapidly growing market and a rapidly diversifying market,” said Stephen Liberatore, managing director at TIAA Investments, an affiliate of Nuveen, and manager of the TIAA-CREF Social Choice Bond Fund. He added that liquidity might have been an issue years ago, but not anymore.

"Even then," said Smith, an economist by training, "green bonds were misrepresented as an illiquid investment." In the asset’s early days, analysts saw low volume in green bond trading and took that to mean the bonds weren’t easily sold. Smith explained that, in reality, people were just holding on to them. “I’ve never had trouble finding a buyer,” she added.

If anything, the explosion in green bond issuances, from Liberatore’s perspective, is giving the asset class added risk layers akin to a more established market. As a result, he said keeping up with green bonds as an investment vehicle could be difficult for advisors, who should look to work with a fixed-income asset manager with SRI experience.

“The big difference between equities and fixed income is that fixed income is over the counter,” he said. “So having a manager in this particular space is an advantage because you’re going to get access to more deals.”

It’s Not Easy Being Green
There is no legal definition for what makes a bond green, and that can put certain green-labeled fixed income vehicles at odds with the investment thesis of a client.

“Green is not an SEC trigger word,” said Liberatore. “Anyone can issue a green bond. Likewise, something that isn’t labeled green, could be.”

Looking at bonds through an ESG lens is the better way to determine whether or not a bond meets a certain values-based standard, says Liberatore. Sometimes pushing a bond through a screen makes it seem green, while certain green bonds are revealed to be horrible investments from an ESG perspective.

To help with all this, third-party researchers evaluate green bonds, typically using a rubric like the Green Bond Principles, which is a suggested guideline for green bond issuers to follow. Researchers, like Sustainalytics, will also analyze the ESG qualities of an issuer as well as the project associated with the bond.

For advisors with clients bent on investing with impact, a trickier issue is understanding what matters to them in terms of values as well as returns. Last year, 98 percent of Moody's rated green bonds were investment grade, but green bonds underperformed compared to the rest of the investment-grade bond market, 2.9 percent compared to 3.3 percent.

Liberatore said that for the socially-conscious client green bonds and, generally, fixed income SRI might be more compelling than equities, because investors can directly finance a project they feel passionately about.

As far as the future growth of green bonds and growth of SRI in fixed income is concerned, Smith is optimistic. She said, “The fixed income market has the potential to better finance the transition to a lower carbon economy than the equities market.”