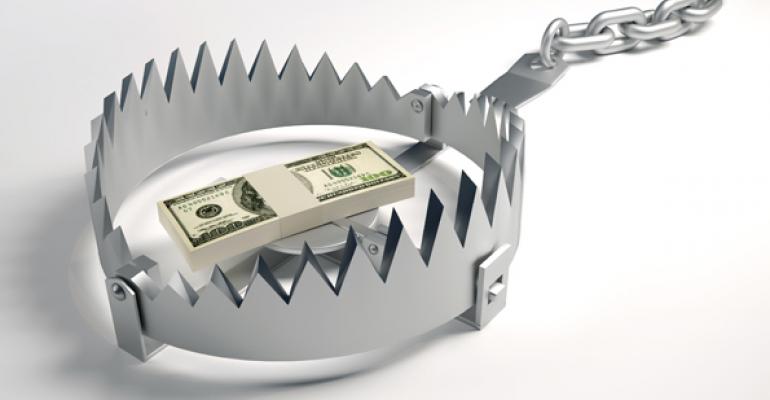 Rates could climb if there is a surge in borrowers competing for loans &nbsp; If long rates remain flat, continue to hold intermediate funds &nbsp; Default rates should remain low as long as the economy stays healthy

With interest rates at rock-bottom levels, plenty of market analysts have been making the same forecast:  rates can only go in one direction—up. That will result in red ink for bond funds. To avoid trouble, the forecasters suggest trimming intermediate funds and shifting assets to short-term bonds and cash.  Shorter issues tend to be relatively resilient when rates rise.

But not everyone is swayed by the bond bears. Powerful economic forces will keep rates low for a long time, says Chris Sebald, portfolio manager of Ivy Bond (IBOAX). “The Fed will not raise rates until late in 2015,” Sebald says. “Long rates won’t rise much for awhile.”

Make no mistake, rates could climb if there is a surge in borrowers competing for loans. But loan volume will remain subdued, says Sebald.  With banks stingier, first-time home buyers have trouble obtaining mortgages. Many households that already own homes are saddled with steep debt burdens.  In addition, the pool of potential borrowers is declining as the baby boomers retire. Most retirees focus on generating income—not on taking out new loans.

If Sebald is right, then investors who swap intermediate funds for cash or short-term bonds could be leaving money on the table. To appreciate the penalty for shifting to shorter securities, consider that three-month Treasuries yield 0.03%, while 10-year Treasuries yield 2.62%. Investors can get 3.5% or more with intermediate corporate bonds. That is a lot of extra yield to forgo.

Bond bears are not impressed. If rates spike, intermediate securities could quickly generate losses. That is true enough, but rates rarely spike. Instead, they tend to rise gradually. In the current environment any climb is likely to be slow.  Say rates don’t rise for a year and then begin to climb slowly. During the period of subdued rates, an investor who holds intermediate funds could collect a lot of extra income that could compound and help cushion losses in any future downturn.

To determine whether it has paid to shift to cash in the past, Wells Fargo Advantage Funds examined six earlier periods when the Fed increased rates.  Most often investors should have stayed with intermediates. The most recent cycle lasted from June 2004 through July 2006, when Ben Bernanke’s Fed increased the federal funds rate from 1.0% to 5.25%. During that time, yields on 2-year Treasuries popped, but yields on intermediate and long bonds actually flattened.  For the period, Treasury bills returned a total of 6.2%, while 30-year Treasuries returned 10.6% and municipals with maturities of more than 10 years gained 14.6%. Why did long bonds thrive as the Fed tightened? Before the rate increases started, the economy was growing and the threat of inflation increased. That caused long bond investors to demand higher yields. But once tightening began, yields flattened as the markets figured that the economy was bound to slow.

Wells Fargo says that in the current cycle, long rates could again remain fairly flat. If you agree, then you should continue holding intermediate funds. Some sensible choices are plain-vanilla portfolios that hold big stakes in government issues and closely track the Barclays Capital U.S. Aggregate Bond benchmark. But many advisors may prefer portfolios that have more flexibility. Some strong funds can hold foreign and domestic issues along with securities of all credit qualities.  Such wide-ranging portfolios have the ability to excel in a variety of market conditions. Top performers include Franklin Total Return (FKBAX), Ivy Bond, Nuveen Strategic Income (FCDDX), and Western Asset Core Plus Bond (WAPAX).

If he worries about rising rates, Ivy portfolio manager Chris Sebald has the flexibility to give greater weight to short-term issues. But these days he is focusing on intermediate securities. The portfolio emphasizes corporate bonds, including big stakes in securities rated BBB, the lowest rung of the investment-grade universe. Those bonds yield about 4%. Sebald also holds bonds rated BB—the highest grade in below-investment grade markets—which yield 4.6%. The high-yield bonds have helped to boost returns. During the past five years, the fund returned 7.1% annually, outdoing 73% of peers, according to Morningstar.

While the lower quality bonds can be risky, Sebald says that the default rates should remain low as long as the economy stays healthy. “The Fed’s accommodative policy is helping the economy to improve,” he says.

Western Asset Core Plus can roam around the world, holding emerging market bonds as well as U.S. government securities and corporate issues. During the past five years, the fund returned 9.1% annually, outdoing 95% of peers. Portfolio manager Carl Eichstaedt often takes a contrarian approach, buying bonds that others shun. He currently has a big stake in bonds from banks and financial companies. Since the financial crisis, some investors have avoided the banks. But Eichstaedt says that the best financial institutions have been following cautious strategies, strengthening their balance sheets and avoiding risky mergers. “The banks are taking actions that are friendly to bondholders,” he says.

Franklin Total Return holds a mix that includes Treasuries, international bonds, and high-yield securities. During the past five years, the fund has returned 7.1% annually. Portfolio manager Roger Bayston likes commercial mortgage-backed securities. These represent pools of loans for commercial properties, such as office buildings and hotels.  Many of the mortgages were clobbered during the financial crisis, but they are recovering as occupancy rates revive. “The fundamentals for many properties are continuing to improve,” Bayston says.

Nuveen Strategic Income can put up to half its assets in below-investment grade bonds. Before the financial crisis, the portfolio managers had virtually nothing in the sector because they figured that the high yields didn’t compensate for the risk. These days the fund has about one third of assets in below-investment grade bonds. Such bold bets have enabled Nuveen to return 10.5% annually during the past five years, outdoing 98% of peers. Portfolio manager Timothy Palmer recently bought Mexican bonds. He argues that the country’s economy will show healthy growth. “Mexico has competitive labor markets that will benefit from the proximity to the U.S.,” he says.