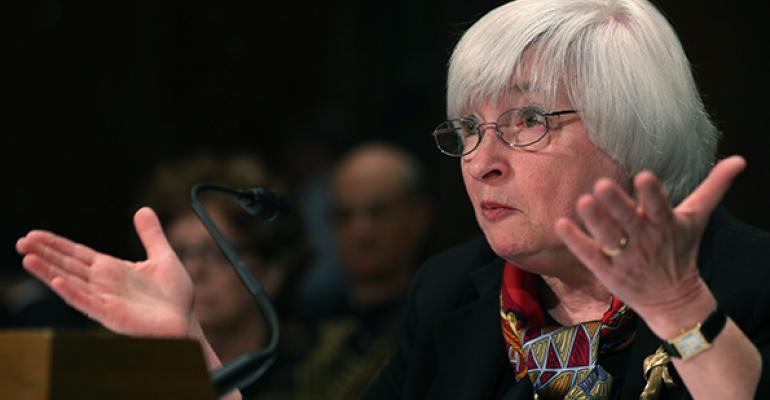 At least for now, investors are confident&nbsp;Yellen&nbsp;can keep things from getting out of hand.

(Bloomberg) -- When it comes to inflation, bond traders are finally starting to listen to the Federal Reserve.

After trying, and failing, to convince investors the steep drop-off in inflation in the past year was just a short-term blip, the Fed is now winning them over. Since mid-February, the outlook for consumer-price gains has soared from post-crisis lows as oil rebounds and Chair Janet Yellen signals a willingness to let the U.S. economy run hot before raising interest rates again. By one measure, market expectations rose last month by the most since 2011.

Getting it right is crucial. Some economists say the Fed is playing with fire because the line between spurring just enough and too much inflation is vanishingly fine, and history shows that once consumer prices do start to pick up in earnest, they’re hard to rein in.

Yet, at least for now, investors are confident Yellen can keep things from getting out of hand. They aren’t demanding more compensation to own long-term Treasuries, which lose more value than shorter-dated debt when inflation rises, and 10-year yields have fallen since the Fed raised rates in December.

The Fed “might have finally aligned enough things to make it happen,” said Mark MacQueen, co-founder of Sage Advisory Services Ltd., which oversees $12 billion in Austin, Texas. “The market is correct in anticipating higher, rather than lower inflation.”

The Fed has been trying to get inflation back to its stated goal of 2 percent since May 2012, which the central bank says will support the U.S. expansion by promoting wage growth and consumer spending. That effort has been undermined in the past year as the plummet in oil, worries about deflation in Europe and Japan, and a stronger dollar all conspired to hold down price pressures in the U.S.

Those worries led some in the bond market to question whether inflation would ever get close to the Fed’s target.

But that’s started to change. While a big reason has been the rebound in commodity prices, there are also signs that the Fed’s easy-money policies -- rock-bottom rates and trillions of dollar in bond buying -- are finally working to boost prices. Excluding volatile food and energy costs, consumer prices increased 2.3 percent in February from a year earlier. That’s the most in more than seven years, data compiled by Bloomberg show.

A similar core measure based on the Fed’s preferred inflation gauge has also improved, reaching a three-year high of 1.7 percent.

That’s helped sway market expectations for inflation over the coming years. Using “break-even” rates, which measure the difference between yields on Treasuries and comparable inflation-linked debt as a way to gauge the bond market’s outlook for cost-of-living increases, investors see inflation averaging 1.46 percent a year over the next five years.

While that’s still below the long-term average, the outlook has improved significantly since falling to 0.95 percent in mid-February. Adjusted to prevailing levels, the last time expectations rose more than they did last month was in October 2011.

Yellen did her part when she stressed in a speech at the Economic Club of New York on March 29 that “caution is especially warranted” in raising rates because of global economic headwinds and remaining slack in labor markets, even as she made clear that policy makers could quickly reverse course if needed. Two weeks earlier, Fed officials provided a prelude by cutting their outlook for rate increases this year from four to two.

And on April 7, Yellen said in a panel discussion that while Fed policy makers aren’t intentionally trying to “overshoot” the 2 percent goal, it’s a target and “not a ceiling.”

“She is more likely to retain her dovish tone even as economic data improves,” said James Ong, an Atlanta-based senior macro strategist at Invesco, which manages $726 billion.

Those betting on a pickup in inflation are already benefiting. Treasury Inflation Protected Securities, or TIPS, had the best returns since September 2011, rising 4.7 percent last quarter. That outpaced the 3.3 percent gain in vanilla Treasuries.

Some market watchers, who recall how then-Fed Chairman Paul Volcker had to ratchet up rates toward 20 percent to get things under control after runaway inflation took hold in the 1970s, say the Fed is now putting that hard-won credibility at risk.

With some consumer-price measures already surpassing 2 percent and the jobless rate dipping to 5 percent, Richmond Fed President Jeffrey Lacker, who has favored raising rates sooner, warned last month that inflation could “move significantly higher” when oil prices bottom out. The overall consumer price index, which showed prices were flat as recently as September, rose to 1 percent in February. Since mid-February, U.S. crude oil has rebounded more than 50 percent from a low of $26.05 a barrel to about $40 today.

Meanwhile, higher prices of inventories caused the U.S. economy to grow more in the fourth quarter than initially reported, according to revised figures released in February. Final numbers released last month showed the expansion was even stronger, increasing 1.4 percent as household spending strengthened.

“The Fed is running the risk of getting more than they asked for,” said Mike Schumacher, the head of interest-rate strategy at Wells Fargo Securities LLC. “They are overconfident in thinking they can rein inflation in. This notion of being able to hit the brakes means you can see the road pretty clearly ahead. And I think the Fed is nearsighted effectively.”

RBC Capital Markets LLC’s chief U.S. economist Tom Porcelli says “it almost borders on hubris to believe the Fed has so much control over inflation.”

The bond market has a more sanguine view.

The “term premium” for 10-year Treasuries, or the extra compensation investors demand to hold them instead of a series of shorter-dated notes that incorporates the added risk of inflation over time, was minus 0.32 percentage point as of April 5, based on the most recent data from the Fed. While that’s up from the lows in mid-February, the measure is still well below its five-year average of 0.65 percentage point.

Since the Fed raised rates for the first time in a decade in December, yields on 10-year Treasuries have fallen from 2.3 percent to 1.72 percent.

“The market definitely has the view that if indeed we do experience a higher run-rate of inflation, the Fed has the tools to deal with it,” said Martin Hegarty, the head of inflation-linked bond portfolios at BlackRock Inc., which oversees $4.65 trillion.