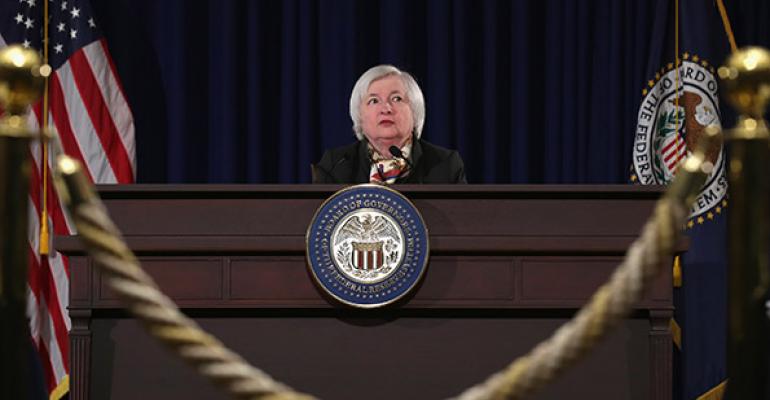 Fed's Independence Is More Fragile Than It Looks

The insulation from voters' short-term whims is worth preserving.

While important and worth preserving, it has limits. In the case of the Federal Reserve, central bankers' insulation from the political process depends largely on political players respecting norms and traditions of behavior. If the last sentence doesn't ring alarm bells for you, it should.

In the past two years, especially the past nine months, just about every convention of government has been thrown out the window. Until now, President Donald Trump has left the Fed alone, as his recent predecessors have. No tweets, no nicknames or second guessing of interest-rate decisions.

There is a risk that changes as Trump approaches the appointment of a new chair and vice chair. Will he feel that as his appointees, rather than Obama's, they belong to him? That would be very damaging to an institution that, for all its flaws, has done a good job in recent years on one of its two mandates: employment. The unemployment rate is down to 4.2 percent.

The Fed has done less well on price stability. As Janet Yellen famously said, that one's a mystery -- and it's clear she is dissatisfied that inflation is too low. (She isn't the only central bank chief in this predicament.) The Fed's models show the rate of price increases should head back to 2 percent. Policy is based on that premise.

The case of the missing inflation is a good reason to ask whether independence can still be justified. Former Fed chair Ben Bernanke hinted at that question last week.

Freeing central banks to make decisions themselves on interest rates was a notion that caught on in the last few decades as a way to keep inflation down. The idea was that officials could do what was required to slay the inflation beast, as Paul Volcker did in the 1980s, even if it would be contrary to voters' short-term wishes. If the problem now is not enough inflation, does that mean political interference would guarantee a better outcome?

It doesn't necessarily. For one thing, we don't know if too-low inflation is just a temporary thing or the result of broad global forces outside the control of politicians and treasury departments, as well as central banks.

Secondly, there's a strong case, in any event, for fiscal authorities to act in concert with monetary priests in occasions of emergency. I wouldn't call the current situation with inflation an emergency, though it is bothersome.

Thirdly, who knows if political decision making would produce a better outcome? It certainly wouldn't be nimble or pretty. Remember Bismarck and the sausage! I find it hard to conceive of a highly partisan Congress obsessed with culture wars making a sophisticated and nuanced monetary decision.

None of this precludes Congress, which created the Fed, from exercising proper oversight and making changes to the parameters of how the central bank acts. But curbing or abolishing the Fed's ability to make operational decisions would be a bad idea.

With so few institutions in American life untrashed, let's hang on to what we have. For Trump, this means making a sound choice and letting appointees get on with the job without the forces of social media, Breitbart or Fox raining down on them. He's left the Fed alone thus far, so credit for that. Don't make it an aberration. For Fed nominees between now and January 2020, hold on to the apolitical traditions of the place.

To borrow from Churchill, it might be the worst form of policy making, except for all the others.

Daniel Moss writes and edits articles on economics for Bloomberg View. Previously he was executive editor of Bloomberg News for global economics, and has led teams in Asia, Europe and North America.