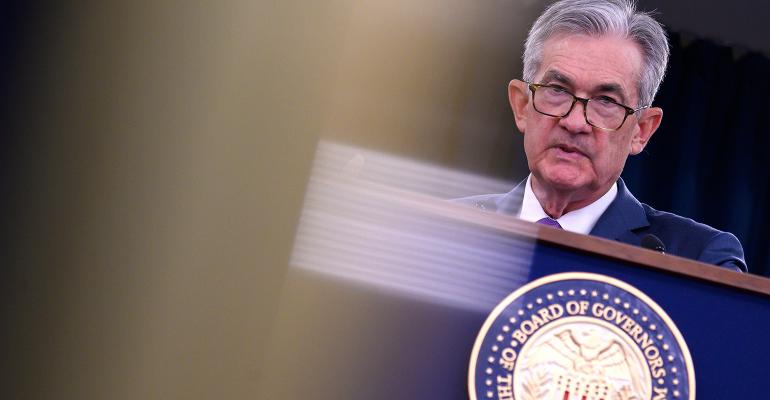 The economy faces “considerable risks” over the medium term, the Fed said in its statement.

(Bloomberg) -- The Federal Reserve pledged to maintain at least the current pace of asset purchases and projected interest rates will remain near zero through 2022, as Chairman Jerome Powell committed the central bank to using all its tools to help the economy recover from the coronavirus.

“We’re not even thinking about thinking about raising rates,” he told a video press conference Wednesday. “We are strongly committed to using our tools to do whatever we can for as long as it takes.”

The Federal Open Market Committee earlier said it would increase its holdings of Treasury securities and agency residential and commercial mortgage-backed securities “at least at the current pace” to sustain smooth market functioning.

A related statement from the New York Fed specified that the pace of the increase would be about $80 billion a month for purchases of Treasuries and about $40 billion of mortgage-backed securities.

“Acting on mortgage-backed securities and Treasuries underscores their belief that more support is needed,” said Diane Swonk, chief economist with Grant Thornton in Chicago. “The Fed does not see a victory in the employment bounce-back. The risk of deflation is still high and the economy needs more support to heal more fully.”

The Fed’s quarterly projections -- updated for the first time since December, after officials skipped their March release amid the burgeoning pandemic -- showed all policy makers expect the funds rate to remain near zero through the end of 2021. All but two officials saw rates staying there through 2022.

The economy faces “considerable risks” over the medium term, the Fed said in its statement, reiterating language from the last FOMC meeting in late April.

Officials forecast the U.S. unemployment rate would fall to 9.3% in the final three months of the year from 13.3% in May, according to median estimates, and to decline to 6.5% in 2021. U.S. GDP was projected to contract by 6.5% this year before rebounding 5% next year.

Powell said the FOMC had received a briefing on yield-curve control -- a strategy to cap Treasury yields out to a specific maturity -- and told reporters that such discussions will continue at upcoming meetings. Economists surveyed by Bloomberg expect them to consider adopting the strategy later this year.

--With assistance from Steve Matthews and Liz Capo McCormick.

To contact the editor responsible for this story:
Margaret Collins at [email protected]