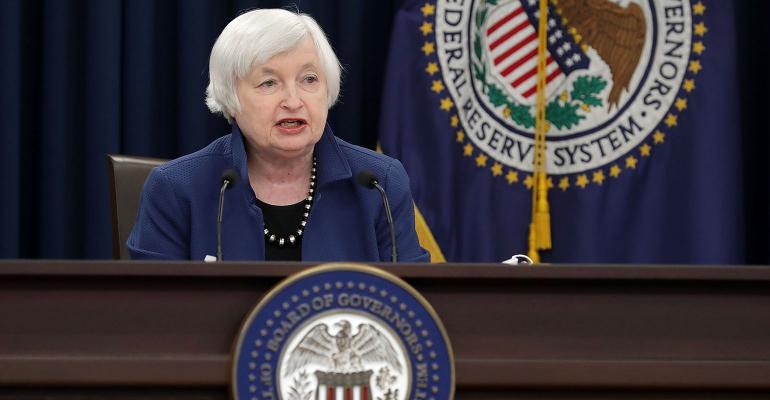 Fed Forges on With Hike, Asset Plan Amid Inflation Concern

Policy makers agreed to raise their benchmark lending rate for the third time in six months, maintained their outlook for one more hike in 2017 and set out some details for how they intend to shrink their $4.5 trillion balance sheet this year.

By Christopher Condon and Craig Torres

(Bloomberg) --Federal Reserve officials forged ahead with an interest-rate increase and additional plans to tighten monetary policy despite growing concerns over weak inflation.

Policy makers agreed to raise their benchmark lending rate for the third time in six months, maintained their outlook for one more hike in 2017 and set out some details for how they intend to shrink their $4.5 trillion balance sheet this year. In a press conference after the decision was announced, Yellen said the unwinding plan could be put into effect “relatively soon” if the economy evolves as the central bank expects.

“Near-term risks to the economic outlook appear roughly balanced, but the committee is monitoring inflation developments closely,” the Federal Open Market Committee said in a statement Wednesday following a two-day meeting in Washington. “The committee currently expects to begin implementing a balance sheet normalization program this year, provided that the economy evolves broadly as anticipated.”

For an interactive graphic of the new "dot plot," click here

The Fed’s actions and words struck a careful balance between showing resolve to continue tightening in response to falling unemployment while acknowledging the persistence of unexpectedly low inflation this year.

“Inflation on a 12-month basis is expected to remain somewhat below 2 percent in the near term but to stabilize around the committee’s 2 percent objective over the medium term,” the statement said. The committee had previously described inflation as close to its goal.

Data released earlier Wednesday showed that, on a year-over-year basis, the core version of consumer price inflation, which strips out food and energy components, slowed for the fourth straight month, to 1.7 percent in May. Following that news, the probability that the June hike would be followed by another increase this year dropped to about 28 percent from 48 percent, according to pricing in fed funds futures contracts.

“They are in no hurry to move again,” said Stuart Hoffman, senior economic adviser at PNC Financial Services Group Inc. in Pittsburgh. “Inflation has moved away from target and taken a step back. They need to wait beyond September to make a determination.”

In a separate statement on Wednesday, the Fed spelled out the details of its plan to allow the balance sheet to shrink by gradually rolling off a fixed amount of assets on a monthly basis. The initial cap will be set at $10 billion a month: $6 billion from Treasuries and $4 billion from mortgage-backed securities.

The caps will increase every three months by $6 billion for Treasuries and $4 billion for MBS until they reach $30 billion and $20 billion, respectively.

Officials didn’t reveal the exact timing of when the process will begin this year, as well as specifically how large the portfolio might be when finished.

The FOMC retained language that it expects to keep raising interest rates at a “gradual” pace if economic data play out in line with forecasts.

Wednesday’s decision brings the Fed’s target for the federal funds rate, which covers overnight loans between banks, to a range of 1 percent to 1.25 percent.

The vote was 8-1, with Minneapolis Fed President Neel Kashkari dissenting from a rate increase for the second time this year, preferring no change.

Quarterly projections for 2018 and 2019 showed Fed policy makers largely maintained their expected path for borrowing costs. The median forecast still has the central bank making three quarter-point increases in 2018; the end-2019 rate is seen at 2.9 percent, a slight change from 3 percent in the March projections.

The new forecasts may in part reflect changes in the FOMC since the last meeting, including the departures of Governor Daniel Tarullo and Richmond Fed President Jeffrey Lacker, and the arrival of new Atlanta Fed President Raphael Bostic.

In any event, interest-rate projections for 2018 and 2019 are becoming less reliable guides to future policy amid the likelihood that the Fed’s Board of Governors will see a major makeover in the next year.

The Fed has in recent weeks wrestled with contradictory signals from unemployment and inflation. Joblessness in the U.S. dropped to a 16-year low at 4.3 percent in May. Despite that, the Fed’s favorite measure of price pressures, excluding food and energy components, rose just 1.5 percent in the 12 months through April, down from 1.8 percent in February. The Fed’s target for inflation is 2 percent.

The recent economic developments prompted FOMC members to drop their median projection for inflation to 1.6 percent in 2017, from 1.9 percent forecast in March. The median forecasts for 2018 and 2019, however, were unchanged at 2 percent.

They also reduced slightly their estimate for the lowest sustainable level of long-run unemployment to 4.6 percent from 4.7 percent. That change, and the reduction in the 2017 inflation forecast, could reduce the urgency policy makers feel to hike rates again in coming months, especially if inflation remains soft.

“Job gains have moderated but have been solid, on average, since the beginning of the year, and the unemployment rate has declined,” the FOMC statement said.

Economic-growth projections were little changed, with the median forecast for 2017 moving to 2.2 percent from 2.1 percent.

The FOMC next meets in six weeks, on July 25-26. A Bloomberg survey of 43 economists conducted June 5-8 showed a median expectation for rate hikes in June and September, followed by the start of balance-sheet unwinding in the fourth quarter.