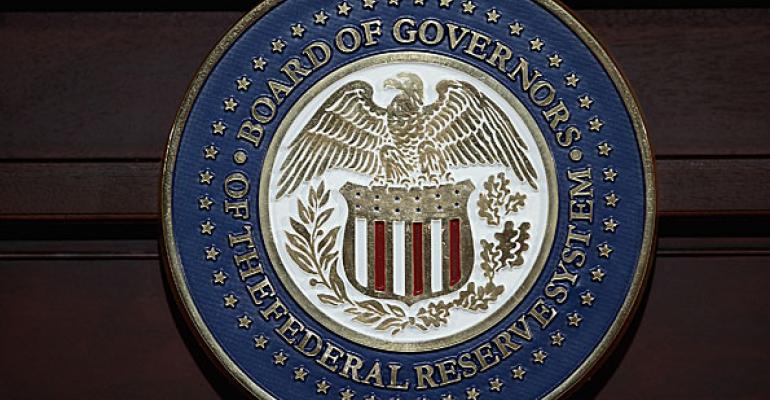 The new omicron strain of the coronavirus poses an ongoing challenge to the economic recovery, according to the Fed.

(Bloomberg) -- Federal Reserve officials intensified their battle against the hottest inflation in a generation by shifting to end their asset-buying program earlier and signaling they favor raising interest rates in 2022 at a faster pace than economists were expecting.

Heralding one of the most hawkish policy pivots in years, the central bank said Wednesday it will double the pace at which it’s scaling back purchases of Treasuries and mortgage-backed securities to $30 billion a month, putting it on track to conclude the program in early 2022, rather than mid-year as initially planned.

The faster pullback puts Fed Chair Jerome Powell in position to raise rates earlier than previously anticipated to counter price pressures if necessary, even as the pandemic poses an ongoing challenge to the economic recovery. The Fed flagged concerns over the new omicron strain, saying that “risks to the economic outlook remain, including from new variants of the virus.”

Powell told a post-meeting press conference that the faster taper put the program on track to end in mid-March and that officials “expect a gradual rate of policy firming.” He said officials don’t expect to raise rates before ending scaling back bond buying, but could hike before reaching full employment.

Projections published alongside the statement showed officials expect three quarter-point increases in the benchmark federal funds rate will be appropriate next year, according to the median estimate, after holding borrowing costs near zero since March 2020.

That marks a major shift from the last time forecasts were updated in September, when officials were evenly split on the need for any rate increases at all in 2022. The new projections also showed policy makers see another three increases as appropriate in 2023 and two more in 2024, bringing the funds rate to 2.1% by the end of that year.

The abrupt change in the taper pace reflects “inflation developments and the further improvement in the labor market,” the policy-setting Federal Open Market Committee said in a statement following a two-day meeting. The Fed reiterated that it “is prepared to adjust the pace of purchases if warranted by changes in the economic outlook.”

“Economic activity is on track to expand at a robust pace this year,” Powell said, adding that “the economy has been making rapid progress toward maximum employment.”

The yield on 10-year Treasuries rose while the yield curve flattened sharply. Meanwhile the S&P 500 index advanced and the dollar surged. Traders lifted the amount of Fed interest rate increases they see for 2022 up to about 73 basis points.

“You are seeing a bit more panic instead of patience within the ranks of the FOMC,” said Diane Swonk, chief economist at Grant Thornton LLP. “This is the first time we’ve seen the Federal Reserve chasing inflation in decades.”

On interest rates, “With inflation having exceeded 2% for some time, the committee expects it will be appropriate to maintain this target range until labor market conditions have reached levels consistent with the committee’s assessments of maximum employment.”

The FOMC vote was unanimous.

“Supply and demand imbalances related to the pandemic and the reopening of the economy have continued to contribute to elevated levels of inflation,” the FOMC said.

While the accelerated taper was in line with expectations from the majority of economists surveyed by Bloomberg News, the interest-rate path was steeper than what analysts had generally seen.

Investors had been expecting a rate hike by mid-year, according to trading in futures contracts, with some chance of a move as soon as March.

Powell, whom President Joe Biden recently renominated to a second four-year term at the helm of the central bank, has faced increasing pressure from both Democrats and Republicans to take more aggressive action on inflation.

Fed officials were caught off guard by the price pressures, which they argued would fade as the world adjusted to Covid-19. Instead, the pandemic has continued and inflation has soared, fanned by supply-chain bottlenecks and strong demand amid massive fiscal and monetary policy support.

In the FOMC statement, officials removed a prior reference to inflation reflecting factors that were “expected to be transitory.” Powell told lawmakers last month that it was time to “retire” the Fed’s description of high inflation as “transitory,” a stance it held for most of 2021.

Consumer prices rose 6.8% in the year through November, marking the fastest pace of increase since 1982. In recent months, surging food and energy prices and accelerating rental inflation have contributed more to overall inflation than earlier in the year, when outsize price increases were concentrated largely in the used-car market and a reopening leisure and hospitality sector.

Unemployment dropped to 4.2% in November from 4.6% in October, a quicker pace of recovery than forecasters had anticipated. Still, the gap between White and Black unemployment rates remains wide -- at 3.7% and 6.7%, respectively -- and Fed officials have said they will take those disparities into account under a new “broad-based and inclusive” approach to judging maximum employment, which they announced last year.

The FOMC’s median projection for 2022 inflation was revised to 2.6%, from 2.2% in September. And it now projects the unemployment rate at the end of next year will be 3.5%, versus 3.8% in September.

Biden still has three more open seats to fill on the central bank’s Board of Governors in Washington and is expected to announce his picks in the coming days. His selections, as well as whoever the Dallas and Boston Fed banks choose to be their next presidents, could play a significant role in the direction the FOMC takes next year.

Those changes also mean the dot plot rate projections released Wednesday reflect the views of several officials who won’t be part of the decision-making process as the Fed navigates the next phase of the economic recovery from the pandemic.