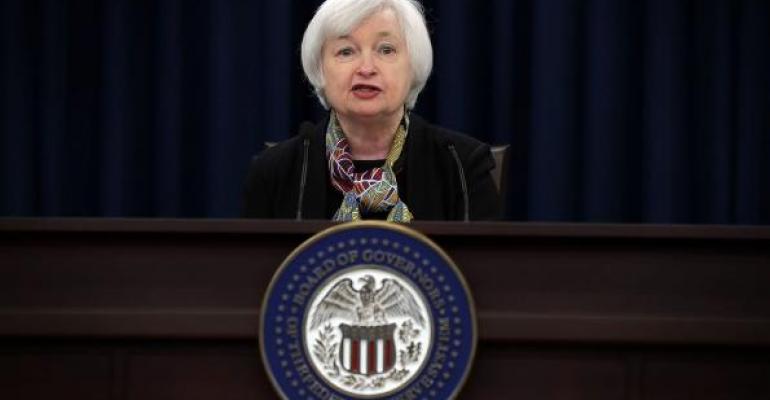 (Bloomberg) -- Treasury yields fell, adding to a decline this week that had narrowed their gap to German and Japanese bonds, as Barclays Plc said the Federal Reserve seems to have accepted it can’t raise short-term interest rates when global peers are easing.

The premium U.S. 10-year yields offer over comparable securities in Germany and Japan dropped to the lowest in a week on Wednesday after Fed Chair Janet Yellen and her peers signaled a slower pace for increases to benchmark rates than previously anticipated. Negative rates and asset-purchase programs in the euro area and Japan have suppressed yields there, while policy makers from New Zealand to China and Norway are easing borrowing costs to boost economic activity. Japan’s benchmark 10-year bond surged on Friday, sending yields to a record low of minus 0.135 percent.

The Fed “appears to be acknowledging that there is a limit to monetary policy divergence and it cannot go it alone in raising short rates when other central banks are easing policy,” New York-based strategists at Barclays, including Rajiv Setia, wrote in a research report. “We believe there is scope for long-term yields in the U.S. to decline, as they look high in a global context.”

The yield on Japan’s 0.1 percent security due in March 2026 dropped as much as 8 1/2 basis points after investors reluctance to sell to the BOJ at the central bank’s bond buying operation underscored demand for government debt. The yield on the nation’s 20-year debt tumbled to 0.29 percent, also an unprecedented low.

The premium 10-year Treasuries offer over the average yield on similar-maturity German bunds and Japanese bonds reached 1.79 percentage points on Wednesday from this year’s high of 1.85 on March 11.

“In the global context the move toward further negative rates has seen a pick up in volatility in bonds,” said Tony Morriss, an interest-rate strategist at Bank of America Merrill Lynch in Sydney. “The ranges on Treasuries are a reflection of more volatility and uncertainty about what policy makers will do from here.”

The Bloomberg Dollar Spot Index, which tracks the greenback against 10 major peers, headed for its steepest three-week slide in more than four years as analysts and investors downgraded forecasts for the currency. In January it touched its highest level in data going back to 2004.

Fed policy makers this week lowered their median interest-rate projection to two increases by year-end from a forecast of four in December. Officials cited the potential impact from weaker global growth and financial-market turmoil on the U.S. economy, even as a gauge of domestic inflation expectations surged after data on Wednesday showed unexpected gains in core consumer prices.

Traders see a 39 percent chance the Fed will raise rates by June with the odds rising to 69 percent by December, according to futures data compiled by Bloomberg. The calculation assumes the effective fed funds rate will average 0.625 percent after the Fed’s next increase.

“We feel the Fed’s reaction function has changed,” said Katrina King, director of research and strategy at Brisbane-based fund manager QIC Ltd. “If Yellen can talk down the dollar a little, then I think that clears the way for the hiking cycle to continue.”