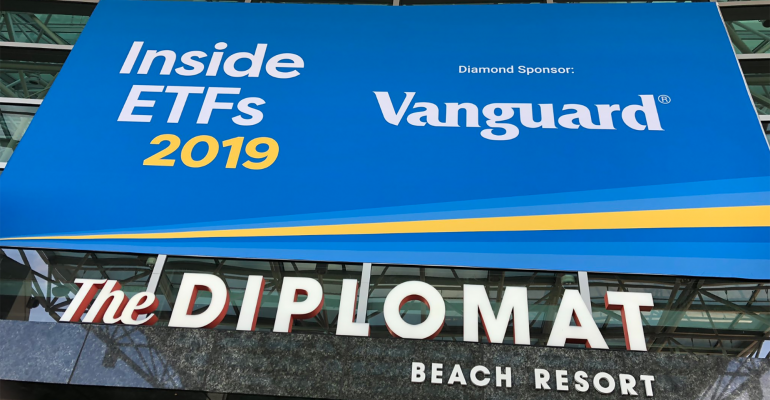 Edward Kerschner at Inside ETFs: Dividends Rebounding in Importance

The biggest challenge in investing comes in the bond market, Columbia Threadneedle Investments' Edward Kerschner said. Interest rates have stopped falling after 35 years of decline. "We have a new rate regime," he said.

From 1930 to 2018, dividends accounted for 40 percent of returns for the S&P 500 Index, he told WealthManagement.com in an interview focused on income investing at the Inside ETFs conference in Hollywood, Fla. But that number dropped to 15 percent for 2010-17, when dividends weren’t so coveted.

Others agree that dividends will rebound in importance, as economic sluggishness limits earnings and thus share price gains.

“The challenge is to avoid the cutters,” he said. “We focus on cash flow.”

If that’s strong, dividends are unlikely to be cut. Columbia also uses an environmental/social/governance filter, Kerschner said. It’s not so much for social reasons, though the firm respects the social benefits. “But it’s a good metric for good management,” he said.

Elsewhere on the income investing front, the biggest challenge comes in the bond market, Kerschner said. Interest rates have stopped falling after 35 years of decline. “We have a new rate regime,” he said. “It’s not that rates are going up, but they’re done going down.”

That’s because it’s market-weighted, meaning that the more an entity borrows, the larger its weight in the index. Of course, the biggest borrowers can be the worst-performing credits. Market-weighted indices are simply “measures of indebtedness,” Kerschner said. He recommends a multisector portfolio.

As for the economy, “everyone worries just about recession and inflation,” he said. “Every question I’ve had is about that.” The best indicator of recession, as proved in Fed research, is the yield curve—specifically the spread between the three-month Treasury bill and the 10-year Treasury note, Kerschner said.

That spread is now about 25 basis points, suggesting the chance of recession is 25 to 30 percent. “That’s not nil, but it’s not overwhelming,” he said.

Recessions on average come when the probability of a downturn is 54 percent. The spread would have to hit negative 100 basis points for that. So, “it doesn’t look like recession is likely in the next 12 months,” Kerschner said.

Kerschner has worked in the investment business for more than 40 years. So what has changed during that period?

“The availability of information has changed,” he noted. It now comes quickly and is available universally. That’s positive, but it means “the value of information is less, because everyone has it. You need to process it in a unique way.”