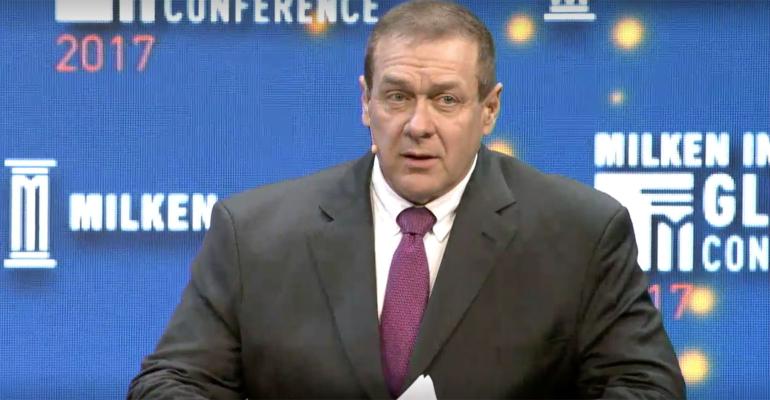 Minerd recommended investors move toward asset-backed securities “and other places where you can get incremental yield without taking the kind of risk that you have to in high yield.”

By Sally Bakewell and Sridhar Natarajan

(Bloomberg) --Guggenheim Partners’s chief investment officer has a message to clients: Don’t get too swept up in the frenzied reach for yield.

The hunt for return on capital is driving institutional investors -- in particular from Asia -- to the U.S. where yields are higher than what they can pick up at home, Scott Minerd said Monday at a conference in Beverly Hills, California. Debt buyers are facing a balancing act of trying to meet legacy liabilities, while stuffing portfolios with high-quality corporate bonds and loans, according to Minerd who oversees about $270 billion at the fund manager.

“One of the things we’ve been doing is trying to lean against it a little bit with our clients,” he said of the hot credit markets, which have been buoyed in part by low global interest rates. “To get them to understand that we’re late in economic expansion, credit spreads are extremely tight, especially in high-grade corporate debt and high yield.”

Minerd made his remarks at the annual Milken Institute Global Conference where business leaders from the investing world and beyond have gathered just as the Trump administration completes its first 100 days in office. While markets are forecasting Trump’s pro-growth agenda will help companies’ earnings and the broader economy, that initial euphoria is now being confronted with questions about the Republican White House’s ability to put policy promises into legislative action.

U.S. high-yield debt has delivered gains of almost 30 percent since last February, with average borrowing costs for indebted companies still hovering below 6 percent. “The challenge for people is to not get forced into taking on a lot of credit risk when spreads and yields are so low,” he said. “This is a good time for people to upgrade their portfolios.”

Minerd recommended investors move toward asset-backed securities “and other places where you can get incremental yield without taking the kind of risk that you have to in high yield.”

Over the last few years Barings, which oversees around $280 billion, has seen money coming into risk assets with “more flows from Europe and Asia,” he said in Beverly Hills. While he sees value in debt markets, the later stage of the credit cycle means “you’ve got to be selective,” he said. Rather than refinancing, companies that are borrowing should be deploying money into new business ideas to generate growth, he said.

Minerd also said that the market has priced in a lot of optimism and he’s getting concerned that if there isn’t movement on critical policy areas such as health care or tax reform before the end of the year, investors will start to doubt the execution of the agenda.