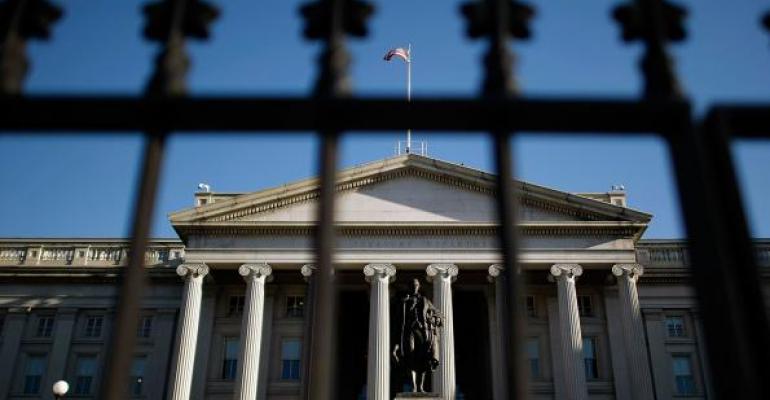 Demand for Treasuries Is Now a ‘Made in the U.S.A.’ Phenomenon

Demand for U.S. Treasuries has moved "from global to local."

In the world’s biggest debt market, domestic purchasers have been faithfully fulfilling the first half of President Donald Trump’s inauguration decree.

Demand for U.S. Treasuries has moved "from global to local," Bank of America Merrill Lynch rates strategists Carol Zhang and Shyam Rajan wrote in a note to clients Tuesday. Whether that turns out to be a good thing remains to be seen.

Domestic pension and insurance companies, banks, mutual funds, and money market funds all bought an above-average amount of U.S. debt over the past year relative to previous 52-week spans going back to 2007, according to data compiled by Merrill Lynch.

"The biggest macro theme playing out right now is the hand-off from international investors to domestic buyers of duration," wrote Zhang and Rajan. "Liability-driven investors are buying the long end of the Treasury market at a record pace since June 2016."

With the noteworthy exception of pension funds, this buying behavior is likely a function of domestic purchasers being the last ones left at the bar, rather than the first to arrive at the party.

Foreign central banks have "sold relentlessly," the strategists write, best evidenced by the decline in China’s foreign exchange reserves to below $3 trillion in January. This rise in U.S. buying helps explain why these continued Treasury sales from the People’s Bank of China no longer roil markets the way they did in the summer of 2015. Recently, demand from foreign private buyers has begun to wane, particularly in Japan, as more and more government debt across advanced economies regains a positive yield. There is about $6 trillion, or 24 percent, of the $25.8 trillion of securities in the Bloomberg Global Developed Sovereign Bond Index that yield less than zero. That’s down from about 40 percent in July.

"That’s been quite a substantial decline," said Gennadiy Goldberg, a New York-based interest-rate strategist for TD Securities. "The risk-reward isn’t quite as obvious for investors such as those in Japan, who are now more inclined to take down their own domestic supply than take-down Treasuries."

Sources of demand for Treasuries could be dwindling at a particularly inopportune time in the event that fiscal stimulus causes the U.S. budget to balloon and the Federal Reserve begins to take steps to slim down its balance sheet.

Many bond market veterans are quick to point to history in dismissing the notion that the Treasury will face difficulties financing these deficits.

“There will absolutely be buyers for U.S. Treasuries," said Charles Morris, a fund manager at Newscape Capital Advisors Ltd. in London. "People have been worrying about debt and a growing deficit since 1995."

Since then, the deficit has become less expensive to fund, he added, with yields retreating.

And it’s not clear that foreign selling -- especially by central banks -- poses a severe threat, said Lacy Hunt, fund manager at Hoisington Investment Management Co., as these entities tend to hold shorter-term debt, with only up to a few years until maturity.

"Treasury studies show the composition of the debt held by these investors: 75 percent is under 10-year maturity -- only 15 percent is greater than 10 year," said Hunt, whose firm oversees about $3.6 billion in assets. "In the 30-year, only about 4 percent of foreign holdings are out that far."

A voracious appetite for duration is evident looking at Treasury strips (bonds and notes divided into principal and interest-only components), which have seen their amount outstanding ramp higher since April 2016.

A quick rebound in equities in concert with rising bond yields in the months following the U.K.’s European Union referendum proved fertile ground for pension funds to rebalance their holdings into risk-free U.S. debt.

"If I’m a pension, and I’m looking at the other side of Brexit when rates are much lower, I’m going to use every pocket of higher rates to de-risk my portfolio," Merrill Lynch’s Rajan said in a phone interview. "The closer you are to home, the less risk you have to take."

The Milliman pension funding index shows these liability-driven investors became less underfunded in the second half of the year after 30-year Treasury yields reached a record intraday low of 2.0882 on July 11.

As such, the prospective combination of a hawkish Fed, dearth of foreign buying, growing issuance and domestic mutual fund outflows would most acutely pressure the belly of the Treasury curve, Rajan said.