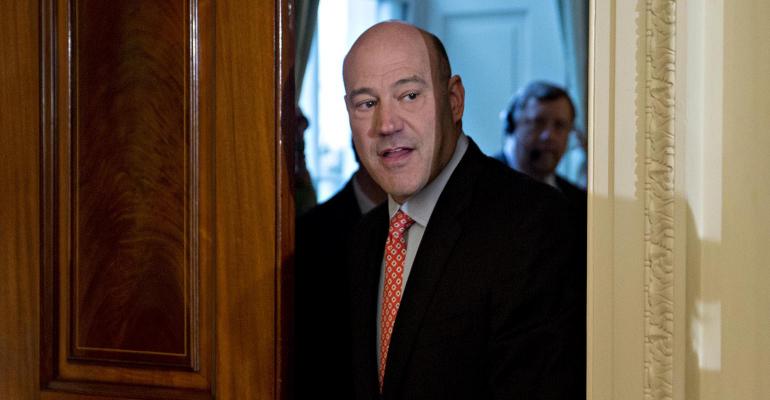 Little change on the horizon in the Fed's course: a drawn-out process of trimming its balance sheet and raising interest rates.

(Bloomberg) --Bond traders are betting that no matter who’s leading the Federal Reserve come February, policy makers won’t stray from the path they’ve been laying out for months.

With Janet Yellen coming off what may have been her final address as Fed chair at the central bank’s annual Jackson Hole gathering, investors are starting to look ahead to who might follow her. The clear front-runner, judging by a survey of economists: White House adviser Gary Cohn, whose fate roiled markets this month when rumors swirled that he’d resign over President Donald Trump’s response to a violent white-supremacist rally. Once it became clear he was staying put, markets settled down. Whether Trump nominates the former Goldman Sachs Group Inc. president or reappoints Yellen, investors overseeing more than $1 trillion in fixed-income assets see little change in the Fed’s course: a drawn-out process of trimming its balance sheet and raising interest rates. And they’re putting money on that view, with positions that are at least neutral -- if not outright bullish -- on the $14.1 trillion Treasuries market.

“I see a Cohn Fed and a Yellen Fed not being terribly different,” said Steve Bartolini, portfolio manager of inflation-focused strategies at T. Rowe Price Group, which oversees $204 billion of fixed-income assets. Because of that, and the outlook for growth and inflation, “our portfolios have been much more focused on adding duration as we moved into the third quarter.”

As a candidate, the Republican slammed Yellen’s Fed, saying it was keeping rates low to benefit Barack Obama, leading some to speculate Trump would nominate a more hawkish Fed chief. Yet now such an approach might work to his disadvantage, given his administration’s goals of cutting taxes, increasing infrastructure spending and spurring exports: Higher borrowing costs, which could boost the dollar, would impede those efforts.

Cohn shares those objectives, which is why bond investors are confident he’d take a gradual approach to tightening policy. He’s said that boosting U.S. growth to 3 percent is “setting very realistic expectations.” Any acceleration in raising rates may undermine that goal.

Last month, Trump said he’d like to see rates stay low. He also said he may reappoint Yellen, but that Cohn would be a top contender.

The Treasury market has reflected the swing in expectations for rates and the economy. The 10-year U.S. yield, at 2.17 percent, is close to its 2017 low. It reached 2.64 percent in December, the highest since 2014.

That may be the high for a while, as the Fed grapples with stubbornly low inflation and wage growth.

“Our base-case has been that the tendency here is a 2-2.25 percent 10-year range, and over time the range is more likely to go down than up,” said Robert Tipp, chief investment strategist at PGIM Fixed Income, which oversees $676 billion. “It feels like this Fed is pretty close to the end of their cycle,” in part since the next Fed leader is likely to be dovish, he said.

The market-implied probability that the Fed raises rates by year-end is about 30 percent, based on the current effective fed funds rate and the forward overnight index swap rate. Fed funds futures aren’t fully pricing in another quarter-point hike until September 2018.

Eventually, something will have to give between the market’s view of the Fed’s path and the central bank’s own prediction. The median of Federal Open Market Committee projections -- known as the dot plot -- implies four quarter-point hikes from the current level by the end of next year.

“It’s hard to really see Cohn being drastically different from where the dot plot is today -- if anything, maybe it’s a little lower,”’ said Scott DiMaggio, who helps oversee $290 billion as director of global fixed-income at AllianceBernstein. “We have no reason to believe he’ll be more hawkish or he’ll usher in a sea change in monetary policy.”