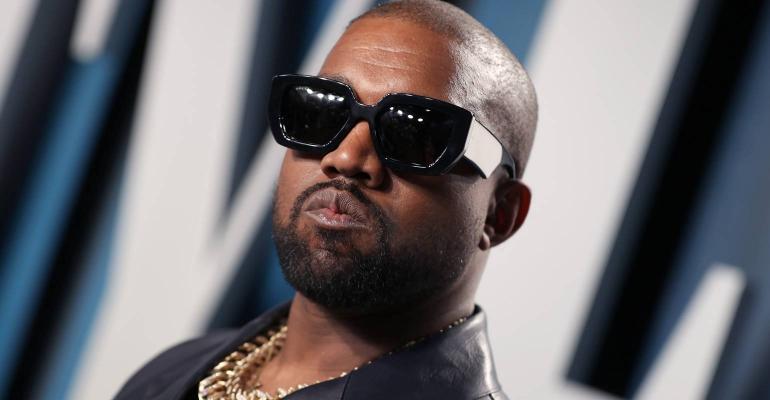 Kanye West knows a thing or two about volatility.

I would consider the cliché idiom, “nothing is certain except death and taxes,” to be wrong. Why? Because its incomplete. I would personally add the following certain items:

But, by request of compliance, I cannot be that promising.

So, let’s reference a newer adage, one that is currently true, but should ultimately come to an end. To quote a modern-day Aesop, Kanye West,  “Let’s go on a living spree, because they say the best things in life are free.” There is no doubt that Americans have been livin’ the Good Life on the heels of unlimited quantitative easing and a water spigot of fiscal stimulus that would even make the Bolsheviks jealous. But what happens when Jerome Powell steals the microphone from America’s princess, the printing press?

Jerome Take My Money, and Now I’m In Need

The Fed has grown its balance sheet to over $8 trillion dollars over the last fifteen months by printing money to purchase approximately $120 billion worth of Treasuries and mortgage-backed bonds on a monthly basis. Why the Fed is still buying $40 billion of mortgage-backed bonds per month when U.S. house price gains are at their highest in over 30 years is head-scratching stuff.

Since Kanye is a College Dropout, let’s give a history lesson.  Historically speaking, what happened to the markets when the Fed announced a tapering or a period of a rising Fed funds rate?

Focusing on the equity market, it should come to no surprise that stocks would rally in the beginning of a Fed tightening cycle because stocks are still being supported by a Fed put. And for those of us who remember the most recent taper-tantrum, it should be no surprise that the first three months after the Fed tightening begins, there tends to be a bit more volatility and uncertainty amongst market participants.

Though, if you look at longer-term periods, the market tends to continue to reward those willing to accept risk. Six months into the tightening, the market tends to recoup all losses. In fact, if you look over the entire tightening cycle, equity market performance during periods of a rising real Fed funds rate shows that overall, it tends to pay to remain invested. The average return over the nine periods noted below is 12.1%, which outpaces the overall compound annual return of the equity market since 1960 by about 150 basis points. 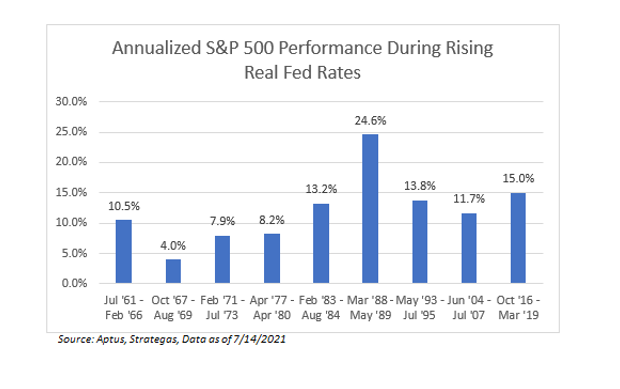 I Had a Dream I Could Buy My Way to Heaven, and When I Woke, I Spent it On a Necklace

It’s projected that the Fed will announce some type of tapering plan at their summer retreat in Jackson Hole (Aug. 26-28), and keeping with the idioms—“history never repeats itself, but it does tend to rhyme”—let’s look through the rear-view mirror and the windshield to see if we can tilt the odds in our favor to succeed.

First, we would assume that traditional fixed income would be Heartless, given that real rates tend to rise on the announcement of a tapering. So, what areas of the stock market have outperformed during these tightening periods? For one, and this surprises me given my marriage to smaller stocks, it pays to be large.

From a sector perspective, leading up to the taper tantrum in 2013, the financial sector was significantly outperformed while technology underperformed, which is very similar to the performance we have seen in the last six months. Look at tech, a higher-duration sector, which underperformed on growing expectations of higher rates. However, major differences exist, as utilities and consumer staples outperformed in 2013 before the taper, whereas energy and materials underperformed. The complete opposite has occurred this time. What is different? Inflation expectations. 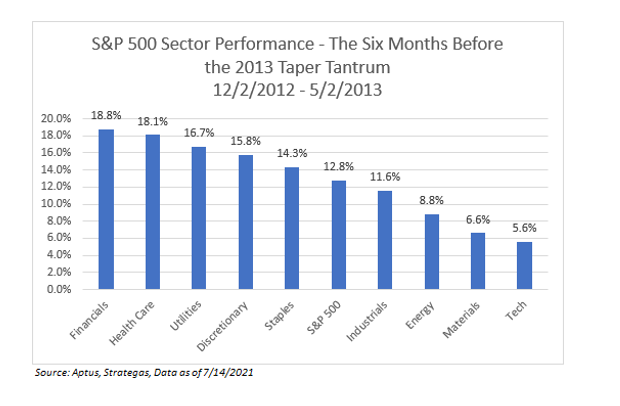 During the taper tantrum in 2013, the industrial sector, followed by consumer discretionary, were the best performing sectors. On the opposite side of the spectrum were the yield-oriented sectors of real estate, communications, utilities and consumer staples. 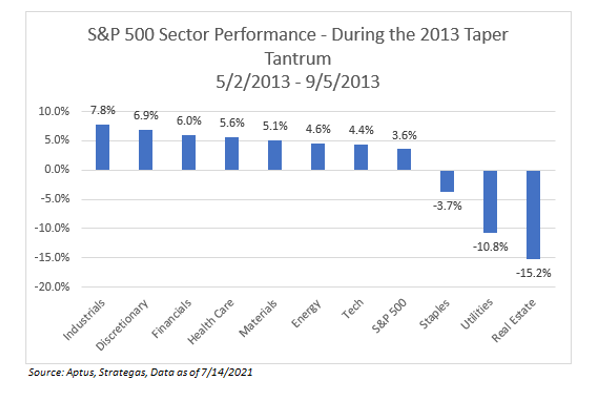 Bought More Jewelry, More Louis V., My Advisor Better Get Through to Me

In a nutshell, during any type of taper tantrum, it pays to have diamond hands (from Sierra Leonne)—even if you encounter a brief bout of volatility—that is why we own vol as an asset class. If the Fed announces any sort of tapering, I hope you’ve learned a few things:

If you don’t prepare now, you may have a more volatile ride than Kim and Kanye’s marriage.

Dave Wagner is a portfolio manager and analyst at Aptus Capital Advisors.