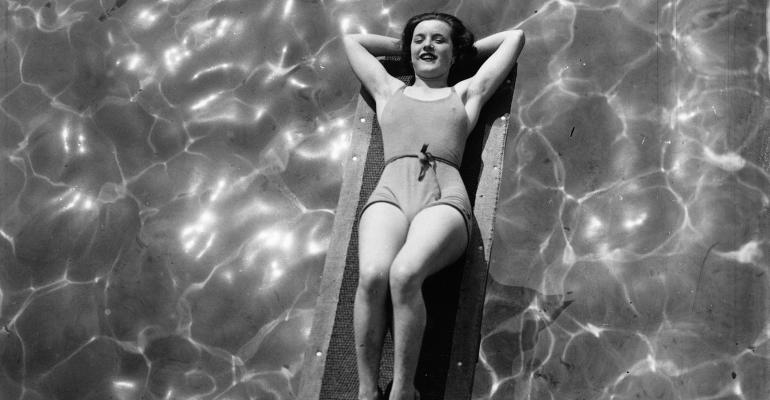 Bond Volatility Is Quiet. But Is It Too Quiet?

The Treasury market’s MOVE index is near a record low with the Fed on pause. There’s angst that the calm can’t last.

(Bloomberg Opinion) --Traders in the world’s biggest bond market likely wished for some peace and quiet after the final weeks of 2018. From early November to the start of January, benchmark 10-year Treasury yields tumbled 70 basis points as investors flocked to havens amid a vicious stock market rout.

Now, almost two months later, they’re left to wonder if the $15.6 trillion market has become too quiet. Bank of America Corp.’s MOVE Index, which dates back to 1988 and tracks price swings on U.S. Treasury options, came within spitting distance of a record low this week. The index value touched 44.5 on Wednesday, close to the all-time low of 44 in November 2017 and another near-record of 44.3 in October 2018. 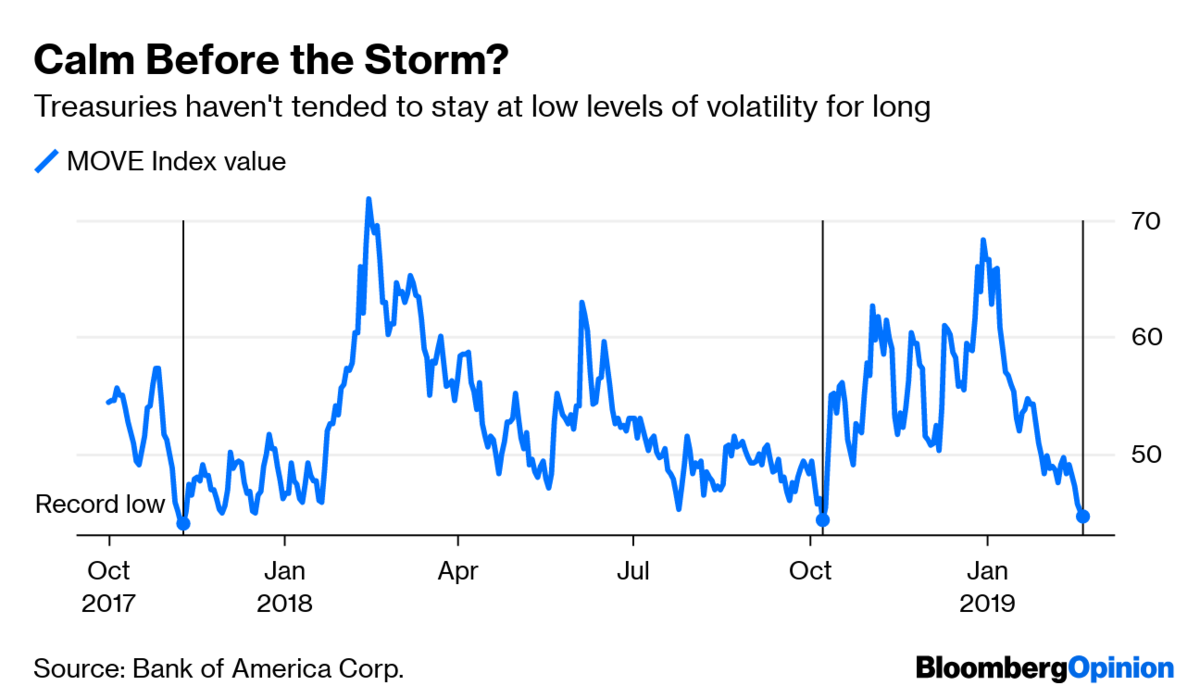 Looking at what happened in the months after those lows, it’s easy to see why traders might be skittish. In the first instance, volatility soared as the Trump administration’s tax plan boosted the economic outlook, pushing Treasury yields higher and leading market prognosticators to declare a bear market had arrived. Within days of the second low, stocks began a slide so severe that Treasury Secretary Steven Mnuchin  called a meeting of top financial regulators to discuss markets.

The difference this time around, of course, is that the Federal Reserve is no longer intent on tightening monetary policy. Chairman Jerome Powell’s pivot around the turn of the year has left Treasuries largely range-bound and trendless. As a result, the only money-making move seems to be selling volatility. Bloomberg News’s Edward Bolingbroke noted that “demand continues to emerge” for selling structures known as strangles, in which a trader sells out-of-the-money call and put options on Treasury futures. They net a small premium up front but face theoretically unlimited losses if prices swing widely. So far, that hasn’t been the case. In fact, the 10-year Treasury yield closed on Thursday within a 10th of a basis point of its 2019 average.

Predictably, the prospect of big losses unnerves some traders. The geopolitical risks that captivate the market daily, from Brexit to U.S.-China trade talks, don’t appear to be going away soon, nor does the fretting over global growth and the prospect of a recession. Mix in the political gridlock in Washington and there are no shortage of reasons to bet that something has to give.

As always, the hard part is nailing down the timing. It reminds me of when Jeffrey Gundlach, DoubleLine Capital’s chief investment officer, cautioned in August that a record short position among hedge funds and other large speculators in 10-year Treasury futures “could cause quite a squeeze.” That didn’t immediately come to pass — the benchmark yield rose from 2.86 percent on the day of his tweet to as high as 3.26 percent on Oct. 9. But soon after that peak, as the market reversed, those speculators unwound positions, sometimes in a hurry.

Mark Kiesel, chief investment officer of global credit at Pacific Investment Management Co., is among those suggesting the time to de-risk is now, for the aforementioned reasons. “Markets are set for more volatility ahead,” he said Thursday in a Bloomberg TV interview. “The market has priced in a lot of good news,” he added, suggesting that investors consider “tilting the portfolio toward high-quality Treasuries” and other lower-risk assets.

I certainly don’t pretend to be any better at market timing, but it feels a bit early to expect the end of the Treasury market’s listless trading, whether based on pure technical analysis or gut feeling. Few seem to want to test the established ranges, instead turning to more esoteric bets like a narrowing Libor/OIS spread. Bloomberg’s Bolingbroke posited that such trades “may become the only game in town if the odds of Fed action stay mired around zero.”

At some point, something will break the Treasury market’s peace. But it could take a while.