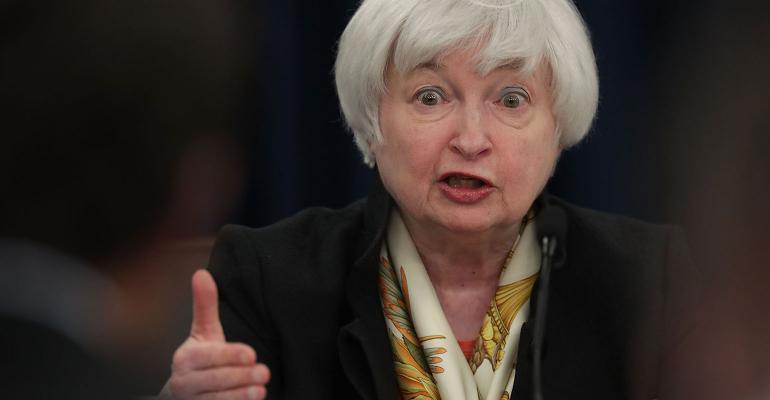 (Bloomberg) -- For all the talk that central banks have taken over financial markets, the paralysis gripping the Federal Reserve over upsetting bond traders sure makes it seem as if it’s the other way around.

Time and again, Janet Yellen and other Fed officials have tried to jawbone investors into believing they were finally ready to raise interest rates. Yet time and again, whether it was because of Brexit, a slowing Chinese economy or just lackluster growth at home, they lost their nerve.

The consequences have been significant. Not only have doubts about the Fed’s resolve left traders convinced there’s little more than a 50-50 chance rates will rise at all in 2016 (policy makers began the year predicting four hikes). They’ve also fueled a sense of complacency that has everyone from Jeffrey Gundlach to Bill Gross warning that bonds have become overvalued. But perhaps most important of all is that the perceived loss of credibility has left the Fed with no good choices. Either raise rates now and risk blindsiding investors, or hold off longer and reinforce the view the central bank is at the mercy of the markets.

“The fact is that the Fed is beholden to what market participants say the move is going to be,” said Colin Robertson, who oversees $398 billion as the head of fixed income at Northern Trust Asset Management. “Some day, some time, they just have to shock the market and deal with the collateral damage.”

Futures traders are now pricing in just a 20 percent likelihood the Fed will lift rates by 0.25 percentage point at its Sept. 20-21 policy meeting, down from more than 40 percent in late August. To Robertson, it might as well be zero. RBC Capital Markets, one of the Fed’s 23 primary dealers, said in a Sept. 14 report that a rate hike this week would be “the mother of all surprises.”

Central banks worldwide are discovering just how hard it is to wean investors off their easy-money policies. This month, when the European Central Bank refrained from taking more aggressive steps and speculation emerged the Bank of Japan was mulling ways to push up long-term bond yields, the U.S. stock market tumbled, while Treasuries suffered the biggest losses in more than a year.

In the U.S., there’s little conviction among traders that the Fed will do much to disrupt the status quo, either this month or in the months and years to come.

One market metric suggests that five years from now, the Fed’s target rate will rise to about 1.25 percent, from a range of 0.25 percent to 0.5 percent today. The measure -- known as the one-year swap, five years forward -- has tumbled a full percentage point just this year.

At the same time, the bond market’s inflation expectations, a key measure the Fed uses to guide its policy decisions, have remain subdued. The five-year outlook starting in 2021 currently stands at 1.5 percent, less than the Fed’s 2 percent target for actual inflation and well below its historical average.

That’s been the case even as several Fed officials ramp up their rhetoric. Yellen and Vice Chairman Stanley Fischer hinted in August that the bank may raise rates at least once this year, if not twice. Regional presidents from Boston to Cleveland toed a similar line.

Part of the skepticism has to do with the Fed’s own actions. In September 2015, the policy makers stunned the market by standing pat, even after a majority of traders in August bet that they would finally end their near-zero rate policy. The bank eventually moved in December.

This time, the way that Yellen has avoided spelling out specific timing betrays the Fed’s lack of conviction, says Western Asset Management’s John Bellows. That suggests the central bank is really just trying to keep its three remaining meetings “live” this year, rather than laying the groundwork to tighten.

“She’s been much more careful, talking in very general terms about the case for rate hikes being strengthened without any time reference, without anything concrete,” said Bellows, who helps run the $604 million Western Asset Short-Term Bond Fund.

That’s not to say everyone is counting out the Fed. Laura Rosner, senior U.S. economist at BNP Paribas, says she expects a September hike, while Columbia Threadneedle Investments’s Gene Tannuzzo says that if he had to pick between a move this month or December, he’d take the former.

“If you make a list of their voters and their most recent commentary, I think an honest read says they want to go,” said Tannuzzo, a money manager at Columbia, which oversees $460 billion.

And if the Fed does move, many investors will have no one to blame but themselves. Despite repeated warnings from luminaries such as Gundlach and Gross that the 30-year bull market in bonds may have finally gone too far, yields on benchmark Treasuries are still less than 0.4 percentage point from their all-time low in July. Globally, yields on more than $11 trillion worth of bonds are still below zero, meaning that buyers are effectively betting that they can profit from further price gains.

Whatever the case, the disconnect between the Fed and the markets seems destined to leave more losers than winners in its wake.

Raising rates now risks a backlash that could cause borrowing costs to surge and stymie the central bank’s push to support job growth and inflation. It would also open up the Fed to a flurry of criticism, whether it’s a lack of transparency or faulty communication. Doing nothing costs policy makers their clout and leaves them at the mercy of future data (not to mention the U.S. presidential election and the vagaries of ECB and BOJ policy).

That’s risky, particularly when Boston Fed President Eric Rosengren says that failing to raise now could shorten, rather than lengthen, the current expansion.

“They’re concerned that any misstep or what might be perceived to be an aggressive policy move could upset risk assets and unwind the economic progress,” said Michael Fredericks, the head of income investing at BlackRock Inc., the world’s largest money manager.