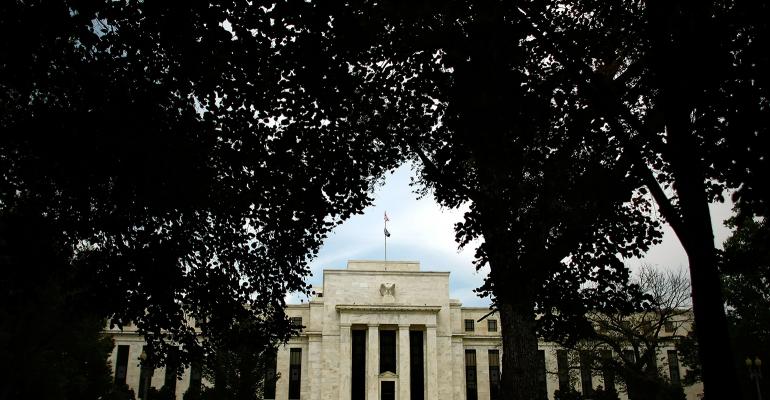 (Bloomberg) -- Federal Reserve officials are warning investors not to rule out an interest-rate increase as soon as the central bank’s next meeting in November. The bond market’s response? We’re not buying it.

In the past week, regional Fed presidents including Dennis Lockhart, Loretta Mester and Patrick Harker have said the U.S. economy is ripe for a hike and called the Nov. 2 meeting live for a rate decision. Traders and strategists aren’t convinced. Futures are assigning just a 1 in 5 chance of a November move, and the market’s best and brightest say even those odds are far too high.

To primary dealers such as Barclays Plc and Bank of Nova Scotia, a rate increase next month would be out of character for a central bank that’s slashed projections for the path of tightening in 2016 to one hike from four at the beginning of the year. A hike next month would surprise markets and come at a meeting without a scheduled press conference allowing Fed Chair Janet Yellen to explain the move. They also say officials will avoid raising rates less than a week before one of the most contentious presidential elections in U.S. history, as a hike risks contributing to volatility or being construed as politically motivated.

Policy makers "say politics doesn’t enter these things, but I’ve been doing this for a long time and I can guarantee you politics does enter these decisions," said Charles Comiskey, head of Treasury trading in New York at Bank of Nova Scotia, one of the 23 dealers that trade with the Fed. "Given the Fed’s track record in delivering interest-rate hikes, I and many people in the market should be very skeptical on when they’re actually going to deliver."

Traders assign about a 21 percent chance to a rate increase next month, according to futures data compiled by Bloomberg. The probability of a hike by December jumps to 61 percent. The calculation is based on the assumption the effective fed funds rate will trade at the middle of the new range after the central bank’s next boost.

Barclays was one of two primary dealers to break with consensus and forecast a hike at the Fed’s meeting last month. After officials stood pat, Barclays pushed back its call for the next rate increase to December, skipping over the November meeting.

“One thing they would want to avoid is seeming political by hiking so close ahead of the U.S. election,” said Michael Pond, head of global inflation market strategy in New York at Barclays.

Traders have also been skeptical that officials will hike at any meeting that isn’t followed by a press conference. The conferences occur after every other Fed gathering, with the next one slated for December. When the Fed raised rates for the first time in nearly a decade in December, Yellen followed with a scheduled appearance to explain the decision.

Richmond Fed President Jeffrey Lacker, who dissented twice last year in favor of raising rates, urged the central bank to hike to head off inflation in a speech Tuesday in Charleston, West Virginia. The policy rate should be at least 1.5 percent by now, he said.

Investors are shrugging off the latest Fedspeak because most of the officials are well-known hawks who have advocated for the central bank to raise rates sooner rather than later, according to Pond. Mester was one of three voters on the policy-setting committee to dissent in favor of hiking last month, while Lacker, Harker and Lockhart aren’t voting members this year.

"So a hawk is hawkish -- the market really didn’t learn anything new from that,” Pond said. “We’ve seen some move up on the front end, and that seems to be related to the market pricing in the Fed going in December."