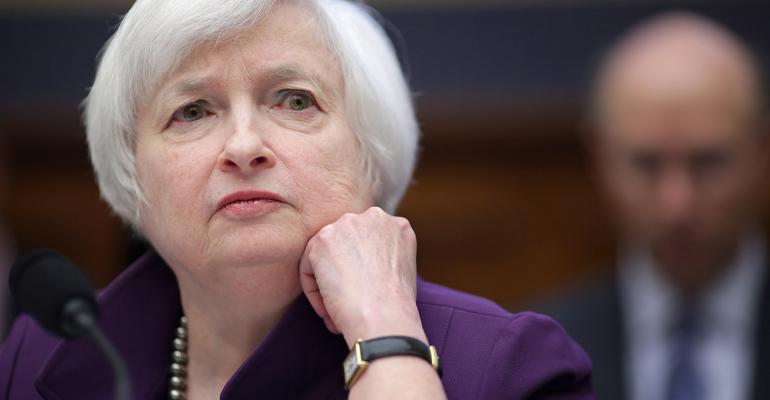 The Fed’s willingness to tolerate more inflation should not have been taken positively by long-term bond investors.

(Bloomberg Prophets) --Even though the Federal Reserve has raised interest rates twice in three months, it’s been a good time to own bonds. The market has rallied mainly because fears of a more aggressive, hawkish-sounding Fed failed to materialize. That reaction was shortsighted.

If the Fed allows inflation to go above its 2 percent target, as was implicitly allowed by Fed Chair Janet Yellen’s characterization of that target as symmetrical, then policy makers may be forced to hike rates faster and higher than investors currently anticipate. Moreover, the Fed’s policy approach is reactionary, not anticipatory, ensuring that it falls further behind the curve in normalizing rates and be forced to play catch up. That’s not good for investors in longer-term bonds.

The driving force behind Fed policy these days is the tightening of the labor market. Labor is scarce, causing wage rates to accelerate. That increase in wage inflation has so far been mild, going from 2 percent to 2.8 percent over the past year, but it will continue to gather momentum. The next set of wage data come Friday with the monthly jobs report. Unless productivity accelerates unexpectedly, there is little to offset the transmission of higher labor costs into higher prices. With the labor market already at maximum employment -- which is Yellen’s characterization of the labor market -- higher inflation is coming, even if we don’t yet know how quickly and by how much. The longer the Fed waits to normalize rates, the greater the risk that it will have to push rates up sharply, which can be highly disruptive, hurting stock and bond prices while shocking the economy into recession.

The market doesn’t seem to appreciate the need for the Fed to quickly normalize policy. Until senior Fed officials signaled in unmistakable terms that a rate hike was likely in March, investors were anticipating only one or two increases this year, with none before June and certainly not the three implied by the Fed’s dot plot chart. Investors finally took their cue from public Fed statements, not from the data. But rather than seize on this momentum, the Fed undid the good of moving earlier than expected by making remarks that sounded very dovish.

So it’s probably not surprising that after the Fed boosted rates there were plenty of voices expressing surprise that policy makers felt any need to move in March -- and a few even think that the increase will be reversed before long! Neel Kashkari, president of the Minneapolis Fed, said he dissented because he preferred to keep rates unchanged. Apparently, he prefers to wait for inflation to increase above the Fed’s target, which also risks higher inflation becoming embedded in the economy, before taking any action. In contrast, Chicago Fed President Charles Evans, a known dove, told Bloomberg News that “it’s unclear if there is any slack” left in the economy. And William Dudley, president of the New York Fed, has publicly suggested that bond owners are likely to get hurt. Investors don’t appear to be listening. Or perhaps they are listening, since neither Yellen nor Fed Vice Chair Stanley Fischer suggested the possibility that rates might rise more quickly. This is risky and will only add to the market’s confusion.

The Fed’s promise to increase rates gradually potentially makes time its enemy and misleads investors. As inflation rises above 2 percent, as is very likely, and as the labor market continues to tighten, investors will reach a point where they wake up and realize that interest rates are inconsistent with inflation. In fact, that’s already the case. With 10-year Treasuries yielding around 2.4 percent and inflation either approaching or above 2 percent by every measure, buyers earn a negative return after taxes and inflation locked in for 10 years! That is simply unsustainable, as is the yield on two-year Treasuries, which pay only slightly more than the overnight federal funds rate.

The longer these imbalances remain in place, the more inflation is likely to increase and the more rates will need to rise, whether managed by Fed policy or unmanaged via market forces. Policy makers reduced rates to unsustainably low levels artificially through quantitative easing in an emergency quest to restore growth. That was appropriate at the time. But the economy has recovered, unemployment is now low, and the Fed has retreated only minimally from its extraordinary policies. Paul Volcker, Alan Greenspan and Ben Bernanke must be getting nervous.

The Fed could and should have slightly modified its message to open the door to four rates hikes this year and another four next year to better prepare investors. If the current dot chart plays out, the fed funds rate will be between 2.50 percent and 2.75 percent at the end of 2018 -- still not quite a neutral monetary policy stance according to Yellen. But by the end of next year, just on the current trajectory before any consideration is given to fiscal stimulus that might come out of the Trump administration, the unemployment rate could be a percentage point lower and inflation could easily be a percentage point higher.

That combination would suggest the inflation genie has already left the bottle. The Fed’s willingness to tolerate more inflation should not have been taken positively by long-term bond investors. Bond buyers liked the message that rates will rise only slowly without thinking of the longer-term consequences for inflation and interest rates. This will prove to be a costly mistake.