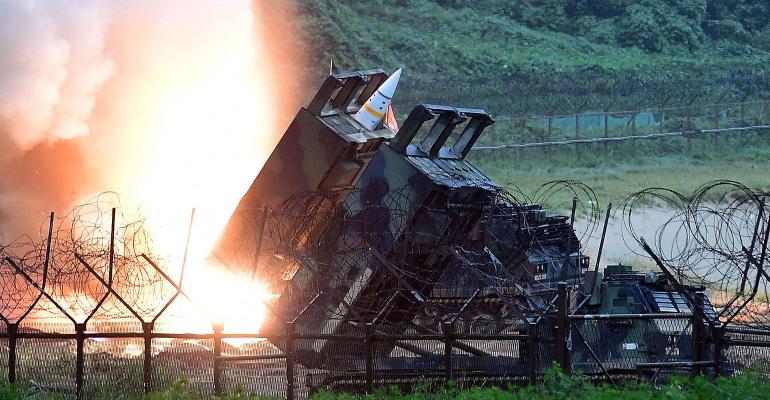 Bond Market Looks Expensive, Until You Factor in Threat of War

Yields are diving as President Trump and Kim Jong Un continue to spar.

(Bloomberg) --The bond bulls in the $14 trillion Treasuries market didn’t expect -- or want -- to be proven right in quite this manner. Of course, it’s not just escalating tension on the Korean peninsula that’s pushed yields toward their lowest levels of the year. U.S. inflation missed estimates yet again last week, adding to doubts about the likelihood of a third Federal Reserve rate hike in 2017. Traders are pricing out that possibility. They’ll get further insight into officials’ thinking when the Fed releases minutes of its July meeting Wednesday.

“We’re in an entirely different economic environment than where we were at the start of the year,” said Ian Lyngen, head of U.S. rates strategy at BMO Capital Markets. “There’s a bit of acceptance that we’re in this lower range, and it makes sense until the geopolitical risks are resolved.”

Treasuries, the world’s go-to haven asset, are riding a two-week winning streak. The 10-year yield, at 2.19 percent, isn’t far from the 2017 low of 2.1 percent set in June. The war of words between the U.S. and North Korea has perked up bond-market volatility from a record low, though it remains below its five-year average, as measured by Bank of America Corp.’s MOVE index.

That complacency poses a risk for Treasuries if the Fed minutes give an even stronger signal that the central bank will announce the start of its balance-sheet normalization in September, said Timothy High, U.S. strategist at BNP Paribas SA. Given the unprecedented nature of the portfolio unwind, it’s unlikely to go as smoothly as intended, he said. Long-end rates are particularly vulnerable to a selloff.

At the same time, the subdued level of inflation is likely to induce the Fed to be gradual with plans for the balance sheet and rate hikes, said  Colin Lundgren, head of U.S. fixed income at Columbia Threadneedle Investments. That’s another win for bond bulls: The drawn-out pace will prevent yields from rising too quickly, even if global tensions ease, he said.

Though, with the past week as a guide, that’s a pretty big “if.”

“The big question now is will it be short-lived or long-lasting?” Lundgren said. “Who knows?”