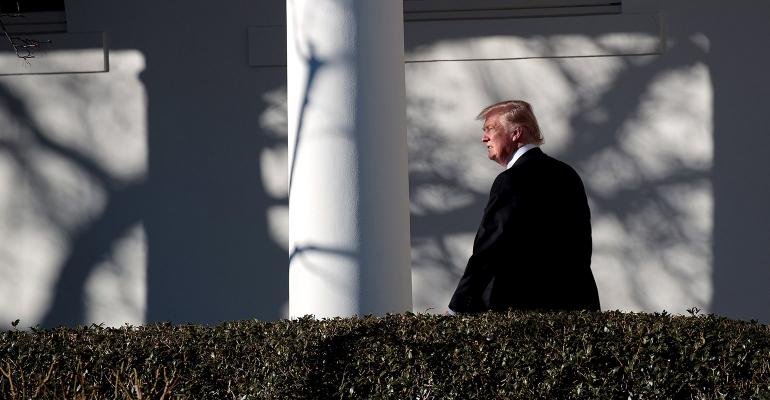 There is a point in the political risk narrative where bond traders just throw up their hands and give up.

(Bloomberg Prophets) --When economists see the cost of goods and services as resistant to change, they call it price-stickiness, or nominal rigidity. When traders see a pronounced bias for a market to trade one direction regardless of the news, they call it sticky-up or sticky-down. In recent weeks the tone of the U.S. Treasuries market has been emphatically sticky-up. An increasing amount of perceived political turmoil in Washington has threatened the equilibrium in higher risk assets such as equities and dimmed the outlook for the Trump administration’s initiatives on taxes and infrastructure.There is a point in the political risk narrative where bond traders just throw up their hands and give up in terms of speculating on the next wiggle in U.S. interest rates, and for many of them we reached that point last week as headline fatigue set in. The bombshell revelations on Federal Bureau of Investigation Director James Comey’s dismissal and the Justice Department appointing Robert Mueller, the former director of the FBI, as special counsel to the lead the probe into Russia’s alleged meddling in the U.S. election and whether anyone close to President Donald Trump colluded in the effort, were a quick reminder that the market is not only driven by such economic influences as growth and inflation, but that it is subject to violent upheavals when news shockers hit the tape. And, they are coming in rapid succession.

The Washington headlines came after one of the quietest periods in recent Treasury market history, as a lull between Federal Reserve interest-rate hikes induced many traders to relentlessly sell options to augment their performance. This large short position in volatility took a hit midweek when the equity market took a dive, driving a massive flight-to-quality move in U.S. Treasuries.

While there were plenty of reasons for a panicky rush into havens such as Treasuries (the meltown in risk assets, for one), there are even more reasons to believe that when the headlines slow and the equity market finds its footing that the Fed’s base case for removing excess accommodation remains intact. Under Chair Janet Yellen, the Fed has carefully rebuilt its credibility with the bond markets, and while its three-hike plan for 2017 program has been called overkill, the central bank’s determination to get a June hike done is still respected with the market pricing in a greater than 70 percent chance despite the 0.7 percent reading for first-quarter gross domestic product and the recent soft inflation reports. This time, the market believes that the hurdle for the Fed to not tighten is very high -- 300 point dumps in the Dow Jones Industrial Average won’t do it, and neither will FBI investigations.

It would be hard to top the level of drama we saw in Washington last week, and by Friday the markets were calming considerably as President Trump took off for his first foreign trip. Stocks rebounded solidly, bonds cheapened, oil traded over $50 per barrel and metals jumped. That small retracement in Treasuries barely dented the midweek rally that had taken 10-year yields from 2.42 percent all the way down to 2.18 percent, before ending the week at 2.25 percent -- a clear case of sticky-up Treasury prices. The armies of speculators who normally might rush to sell Treasuries short in anticipation of the coming Fed rate hike are staying on the sidelines in case another political shocker hits the newswires. Headline risks are impossible to quantify, and this results in a sort of position paralysis as many investors stick close to their benchmarks and hedge funds do very little. The most active participants in times like these are the technically-oriented futures players, whose black box momentum models are systematic in nature and are very bullish after the big rally in bonds last week.

Many traders will be interested in establishing new positions once they believe the market has overshot one way or the other as a result of some new piece of unexpected political news, and they will under-react for now to traditional metrics such as economic data releases. This week, the market won’t have much to parse in terms of economic data other than some second-tier housing numbers, revisions to first-quarter GDP and durable goods orders on Friday.

The key event is the release of the Federal Open Market committee meeting minutes on Wednesday. Many market players expect the minutes to reflect a steady-as-she-goes central bank approach, with policy makers reiterating the strength of the labor market and the expected improvement in growth. That type of approach is very much in keeping with the narrative the Fed established in the run-up to the March rate hike -- and a limiting influence on Treasury market volatility. The market will grant the Fed the June hike, but not much chance of another this year, leaving the prospective federal funds rate at 1.125 percent for some time. It would take a reversal of the weak inflation data to change that outlook.