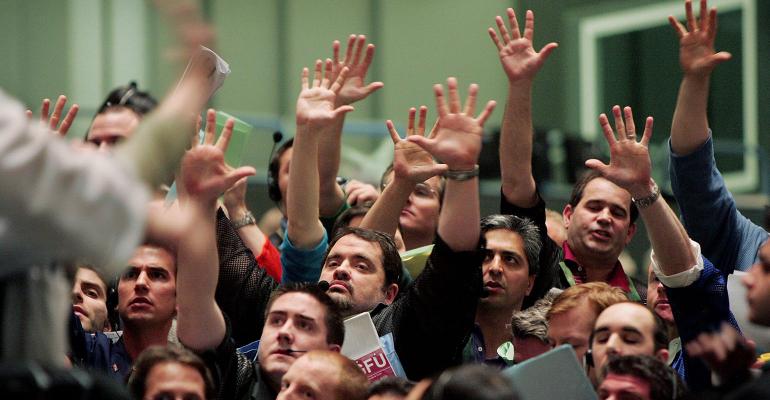 Block Traders Are Strong-Arming the Tamest Bond Market Ever Seen

Without block trades, volatility has been absent in the bond markets.

(Bloomberg) --By just about any measure, trading in Treasuries has never been more tranquil. Yet beneath the surface, an explosion of bets in futures is buffeting the $14 trillion market.

Block trades, which are large, privately negotiated transactions, have turned into a force to be reckoned with as volumes have subsided in the U.S. summer months and as neither the Federal Reserve nor Capitol Hill has been able to shock markets out of their torpor. Now more than ever, investors say, the blocks are big enough to jolt prices and push wagers into or out of the money, luring traders who seize on the momentum and magnify the move.

The approach has become so prevalent that traders say they’re glued to their screens, anticipating the next episode. Block trades have become such potent drivers because volatility is otherwise absent: The Merrill Lynch MOVE index fell to a record low Monday. Yet on the same day, a 14,000-contract block of 10-year futures, the largest in at least a week and representing $1.1 million of risk per basis-point move, whipsawed yields. “What you’re doing right now is you hope you don’t get caught in what used to be called tape bombs, now futures bombs,” said Michael Franzese, New York-based head of fixed-income trading at MCAP LLC, a broker-dealer. “If you’re moving a position for another customer and you’re short or long a certain amount, and then all of a sudden one of these trades come through, it can really hurt you on a day-to-day basis.”

The trades are likely short-term tactical plays taking advantage of diminished turnover, rather than the product of a view on the direction of interest rates. They also appeal to asset managers who need to put on a large position, no matter the cost. Another 10-year block moved Tuesday, with a 12,000-contract trade sending benchmark yields to their highest level of the session.

Yet with the likes of Alan Greenspan warning of a bond-market bubble, it’s only natural that investors are on edge about shifts in the Treasury market. Benchmark yields aren’t too far above their 2017 lows, even though President Trump’s election spurred predictions that this would be the year when interest rates would finally rise amid a burst of economic growth and inflation.

Investors including BlackRock Inc., the world’s largest money manager, are on the lookout for large orders that can wield more influence over prices than any political event or set of economic data.

“There were a couple of big buyers in the market yesterday that drove the back end of the curve,” Rick Rieder, global chief investment officer of fixed-income at BlackRock, said in an Aug. 4 interview on Bloomberg TV. He credited them more than a report related to special counsel Robert Mueller’s probe of Russian electoral meddling.

Judging by the way the market traded on Aug. 3, he’s right.

It ended the session at 2.8 percent, meaning there was little follow-through even after the Mueller report came out around 3:30 p.m. New York time.

What counts as a block trade depends on when it’s executed. Ten-year Treasury futures require a 5,000-contract minimum during U.S. trading hours, according to CME Group Inc. The threshold falls to 2,500 contracts from midnight to 7 a.m. in Chicago, and 1,250 in Asian hours.

“Some of the sizes have been quite staggering,” said Michael Lorizio, senior trader at Manulife Asset Management, which oversees $358 billion.

“Not only has the trade moved the market initially, but it’s oftentimes changed the tone for an extended period of time,” he said. “We’ve seen follow-through trading on the back of some of those one-off, large block trades.”