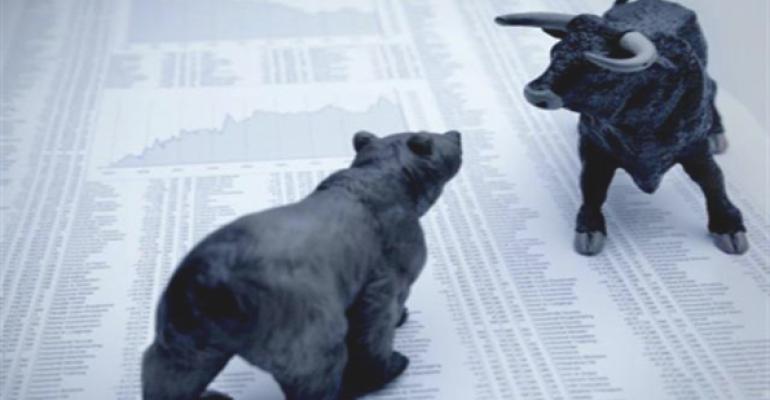 Instead sustained losses, Treasuries have rallied.

(Bloomberg) --The Treasury market’s bulls and bears are ending the quarter in a virtual stalemate, a sign of skepticism toward the economic outlook that belies the near-record levels in U.S. stocks.

Treasuries have gained about 0.7 percent this year, stabilizing after the biggest quarterly loss since the 1980s. Ten-year yields sank to 2.35 percent this week, not far from this year’s lows. The descent marks a reversal from just two weeks ago, when they briefly exceeded 2.6 percent and threatened to break above an area flagged by market veteran Bill Gross as potentially signaling the start of a bear market.

But instead of sustained losses, Treasuries have rallied as confidence in the reflation trade waned after Republicans’ proposal for health-care reform failed. The turnaround is reminiscent of December, when the 10-year yield retreated after peaking at 2.64 percent -- still its highest since 2014. The upshot is that as the first quarter winds down, yields are still stuck in a months-old range, with little sense of an imminent breakout to the upside as Wall Street predicts for later this year.

“There was a lot of overconfidence that the new administration, along with a Republican Congress, would be able to deliver a perfect 10, and deliver it within seconds,” said Dimitri Delis, senior econometric strategist in Chicago at Piper Jaffray. He predicted in December that the 10-year yield would fail to top 2.7 percent this year. “There will be more roadblocks down the road.”

Gross said in January that the 10-year yield would have to hold above 2.6 percent on a weekly or monthly basis to mark the beginning of a bear market. It hasn’t done that since 2014.

The manager of the $1.9 billion Janus Global Unconstrained Bond Fund is still eyeing that level.

Once other central banks begin to step back from quantitative-easing measures, the 2.6 percent “Treasury level (and the global bull market in bonds) will be under siege,” Gross said in an email Wednesday. “U.S. fiscal policy is still in flux but a large tax cut may push yields higher as well.”

His view is backed by technical levels. Fibonacci analysis shows that 2.64 percent is a key retracement level for the bull market of the past few years. If it breaks, yields could complete a full retracement of the cycle, implying a test of an area just above 3 percent, the high of 2013.

There’s also key support from 2.29 percent to 2.33 percent, an area that’s only been entered fleetingly this year. A break below that could lead traders to further sour on reflation trades and drive yields lower.

“We’re going to be in a tight band for the next three to six months -- the 10-year yield is going to be predicated on tax reform,” said Rich Taylor, a portfolio manager at American Century Investments, which oversees $41 billion in fixed-income.

Even with a break below the recent range, Treasuries have a ways to go to get back to pre-election yields of 1.8 percent or lower on 10-year notes. Only one of 55 analysts surveyed by Bloomberg -- Steven Major of HSBC Holdings Plc -- forecasts the benchmark will end the year below that level. The median forecast is for 2.9 percent.

In the few instances this year that the yield has dropped below 2.33 percent, the market sold off, before buyers emerged between 2.52 percent and 2.63 percent.

Some bond-market titans predicted Treasuries would rally before yields move higher. DoubleLine Capital Chief Executive Officer Jeffrey Gundlach said in January that the 10-year yield would dip to 2.25 percent after the March Fed meeting, and then move toward 3 percent. That level, in his view, would signal the end of the bull market.

This year’s modest gains coincide with an equities rally that sent benchmark indexes to all-time highs. Meanwhile, measures of the yield curve are flattening, showing the bond market sees little risk of accelerating growth and inflation.

“It’s the bastion of skepticism: Fixed-income traders worry more about holding onto their money than about appreciation,” said Kathy Jones, chief fixed-income strategist at Charles Schwab & Co. “Historically, the bond market has done a good job of evaluating these things.”