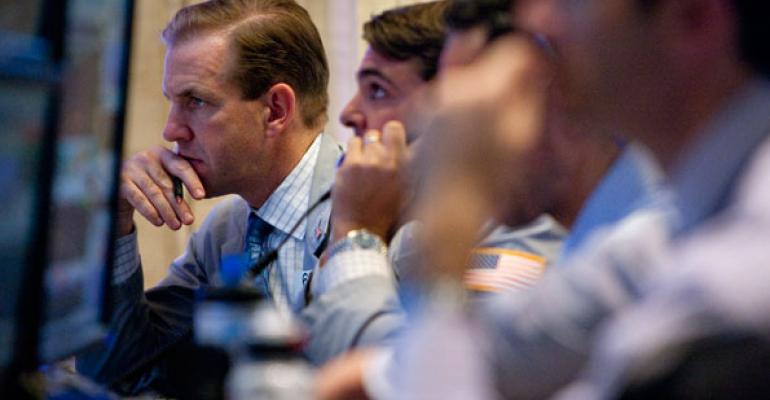 Are We Headed for an Era of Negative Yields on Bonds?

Everyone’s clamoring for extra income in this low yield environment. But some asset managers say we haven’t reached the bottom of the bond market.

By now advisors are tired of explaining to clients how difficult it is to find steady fixed-income returns given the continued low interest rate environment. The traditional corporate bond portfolio isn’t cutting it. At the very least, it can't get much worse, correct? Not quite. We may be facing an era of negative yields.

“Bonds don’t have a lower bound of zero in terms of yield,” said Jeff Sherman, portfolio manager at DoubleLine Capital. “There are irrational things out there, so don’t think that that’s the bottom to this market. That said, we don’t want to lock up money where we know we’d have to pay.”

Finding sources of income was the central topic during a panel session hosted by Genworth Wealth Management in New York Tuesday.

According to Sherman, if you look at the auctions in the bond market in the last few weeks, some bonds, such as France and the Netherlands, have negative coupons. Investors are paying these countries to keep their money. For example, the one-year Dutch bond has been trading at -0.25 percent in the secondary market for the last three months. It’s mostly institutional investors who are buying these bonds because they have mandates to deploy their cash.

“I hear this idea about the bound is zero, but the market has gotten almost irrational, where you’re just saying, ‘Look I've got to do something with my money. I’m going to pay you to hold onto my money,’” said Sherman. “That’s not a really good preservation of capital story.”

Sherman said he would not recommend investors buy anything with a negative coupon. “I would avoid it like the plague.”

In fact, while DoubleLine, new to the Genworth asset management platform, does have a bias toward fixed income, the firm avoids the entire continent of Europe.

“You never want a bond guy to come into a room and start speaking, especially today, because everyone does head for the window. Our job is to get paid to worry,” Sherman said.

Interest rates have been declining since the early 1980s, creating an environment where investors and corporate managers expect high average levels of inflation coupled with lower interest rates, said Nathan Rowader, senior market strategist, Forward Funds, also on the panel. For example, over the last 30 years, the average total return of the 10-year Treasury was about 7 percent, he said. But that's not likely to continue going forward.

“A bond solution may or may not taste good, but I can tell you it’s not healthy,” said Gurinder Ahluwalia, CEO of Genworth Wealth Management.

But Sherman said the low volatility in high yield bonds is a function of retail flows, not of the yield itself. High yield corporate and emerging markets bond funds have taken in more than $42 billion over the past year, according to Morningstar.

“We’ve never seen the influence of retail have on one single segment of the market in the past like we’ve seen in high yield bonds today,” Sherman said. “When you look at the bonds being purchased, the retail investor is the one driving that volatility down.”