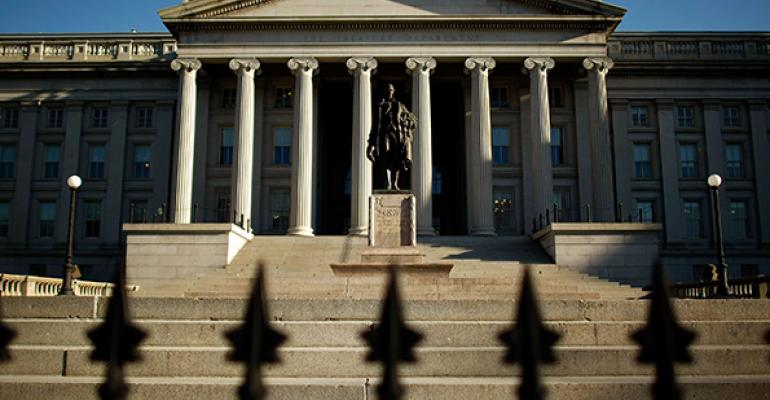 (Bloomberg) --In the age of Trump, America’s biggest foreign creditors are suddenly having second thoughts about financing the U.S. government.

In Japan, the largest holder of Treasuries, investors culled their stakes in December by the most in almost four years, the Ministry of Finance’s most recent figures show. What’s striking is the selling has persisted at a time when going abroad has rarely been so attractive. And it’s not just the Japanese. Across the world, foreigners are pulling back from U.S. debt like never before.

From Tokyo to Beijing and London, the consensus is clear: few overseas investors want to step into the $13.9 trillion U.S. Treasury market right now. Whether it’s the prospect of bigger deficits and more inflation under President Donald Trump or higher interest rates from the Federal Reserve, the world’s safest debt market seems less of a sure thing -- particularly after the upswing in yields since November. And then there is Trump’s penchant for saber rattling, which has made staying home that much easier. “It may be more difficult than usual for Japanese to invest in Treasuries and the dollar this year because of political uncertainty,” said Kenta Inoue, chief strategist for overseas bond investments at Mitsubishi UFJ Morgan Stanley Securities in Tokyo. “Treasury yields may rise rapidly again in the near future, which will continue to discourage them from buying aggressively.”

Nobody is saying that foreigners will abandon Treasuries altogether. After all, they still hold $5.94 trillion, or roughly 43 percent of the U.S. government debt market. (Though that’s down from 56 percent in 2008.) A significant drawdown can harm major holders like Japan and China as much as it does the U.S.

And, of course, homegrown demand has of late been able to absorb the pickup in overseas selling. Since reaching 2.64 percent in mid-December, yields on benchmark 10-year notes have come back and are essentially flat this year. They were at 2.43 percent on Monday.

Nevertheless, any consistent drop-off in foreign demand could have lasting consequences on America’s ability to finance itself cheaply, particularly in light of Trump’s ambitious plans to boost infrastructure spending, cut taxes and put “America First.” The president has singled out Japan and China, the two biggest overseas creditors, as well as Germany, for devaluing their currencies to gain an unfair advantage in trade.

In December, Japanese investors reduced their investments in U.S. debt by 2.39 trillion yen ($21.3 billion) after a smaller pullback in November. While only a fraction of Japan’s $1.1 trillion of holdings, they were first the back-to-back declines since the start of 2014. China, which owns just over $1 trillion of Treasuries, has been selling since May. Its holdings are at a seven-year low.

For now, risk-averse bond buyers like Daiwa SB Investments’s Shinji Kunibe are cutting back on Treasuries, despite some clear advantages.

Like many institutional money managers that invest abroad, Kunibe, Daiwa SB’s head of fixed-income management, likes to hedge away the risk of the dollar’s ups and downs. And right now, it makes sense. After accounting for hedging costs, 10-year Treasuries yield about 0.9 percent, roughly 10 times the return offered by Japanese  government bonds. Going back to the 1980s, Treasuries have rarely enjoyed such a big edge over JGBs.

However, he sees U.S. yields rising further as Trump pursues expansionary fiscal policies and takes a protectionist stance on trade.

“Yields are going to be in an uptrend,” he said.

And investors like Kunibe can ill-afford more losses. Last quarter, Japanese investors who hedged all their dollar exposure in Treasuries suffered a 4.7 percent loss -- the biggest in at least three decades, data from Bank of America showed. The same thing happened in Europe, where record currency-hedged losses also stung euro-based buyers.

“It was a deer in the headlights moment,” said Zoltan Pozsar, a research analyst at Credit Suisse.

Combined with the unpredictability of Trump’s tweet storms, interest-rate increases in the U.S. could further sap overseas demand. Mark Dowding, who helps oversees about $50 billion as co-head of investment-grade debt at BlueBay Asset Management in London, says the firm has already moved to insulate itself from further losses due to higher rates. What’s more, central bankers in Japan and Europe are still experimenting with monetary policies that may benefit bond investors locally.