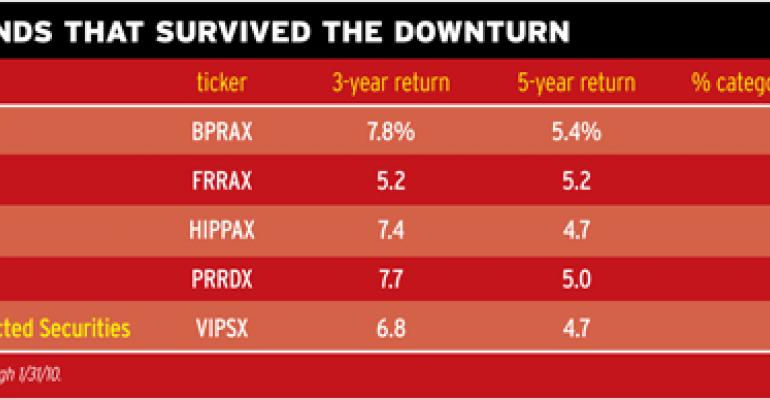 After a Rollercoaster Year, Are TIPS Attractive?

Treasury Inflation-Protected Securities (TIPS). But for all the virtues of TIPS, they can be volatile creatures.

Worried that big budget deficits will lead to inflation, plenty of advisors have been recommending Treasury Inflation-Protected Securities (TIPS). Those can help to diversify portfolios and protect purchasing power. But for all the virtues of TIPS, they can be volatile creatures that suffer significant losses.

The hazards of TIPS become clear during the rollercoaster markets of recent years. For 2008, inflation-protected funds—which own TIPS—lost 4.1 percent, according to Morningstar. In contrast, conventional Treasuries made money, and intermediate government funds returned 4.8 percent for the year. During 2009 inflation funds retraced their steps, gaining 10.9 percent and outdoing intermediate government funds by 6 percentage points. The sharp swings rattled many TIPS owners who had figured that their investments were as steady as conventional Treasuries.

To understand why TIPS can be risky, consider that they deliver income in two ways. Like all bonds TIPS pay interest income. In addition, the principal of the securities rises along with the consumer price index (CPI). Say you put $1,000 into TIPS, and inflation rises by 3 percent. At the end of the first year, your principal would be $1,030.

TIPS investors are guaranteed to get their original principal back at maturity. But they can be stuck with disappointing interest payments during periods of deflation. Fears that income would decline surfaced when the CPI dropped for three straight months beginning in October 2008. Prices of TIPS collapsed as investors began pricing them as if deflation would last for a decade. Since then, investors have poured back into TIPS, seeking inflation protection. Now prices of some securities may be rich and the yields skimpy.
The yields on 5-year TIPS currently are a tiny 0.22 percent. Investors who hold to maturity will get the yield plus the rise in inflation. If inflation remains muted, as many economists expect, the total return would be modest. For better results, investors should park money in 15-year TIPS, which yield around 2 percent, says Larry Swedroe, research director of Buckingham Asset Management, a registered investor advisor in St. Louis. “If you can lock in a 2 percent real yield for the next 15 years, then you should get reasonable results,” says Swedroe.

Instead of buying individual TIPS, many investors may prefer a fund that holds a diversified basket, including securities of different maturities. Some top actively managed funds have outperformed their benchmarks.
A solid choice is Hartford Inflation Plus (HIPAX). The fund typically has 90 percent of its assets in TIPS, but it has freedom to shift into cash or conventional Treasuries. During the downturn of 2008, portfolio manager John Hendricks moved some assets to cash. That enabled the fund to lose only 0.6 percent for the year, outperforming 91 percent of competitors.

“When the real deflationary psychology set in, we were able to tilt away from TIPS,” says Hendricks.

Shifting away from TIPS in 2008 helped BlackRock Inflation Bond(BPRAX), which returned 0.2 percent for the year. The fund must always keep at least 80 percent of assets in TIPS. Portfolio manager Brian Weinstein sometimes holds mortgages and conventional Treasuries. “There are usually a few times a year when TIPS get ahead of themselves and I want to own something else,” says Weinstein.

Another strong performer is PIMCO Real Return (PRRDX), which has returned 7.6 percent annually during the past decade, outdoing 90 percent of competitors. Portfolio manager Mihir Worah must keep a minimum of 80 percent of his assets in TIPS. Beyond that, he can range widely, owning high-yield securities and foreign bonds.

After prices crashed, Worah went shopping, putting all his assets in TIPS. “Sometime around Thanksgiving in 2008, we became convinced that TIPS were a screaming buy, and we bought all that we could,” says Worah.
This year, he has grown wary. With the economy sluggish, inflation is likely to remain more subdued than the markets expect, Worah says. That will lower results of TIPS. He now has his minimum allocation to TIPS.

Franklin Real Return (FRRAX) has also lowered its allocation to TIPS recently. When prices collapsed in 2008, the fund had 69 percent of assets in TIPS. Recently portfolio manager Kent Burns has shifted. He now has 63 percent of assets in TIPS with 19 percent in foreign bonds and 5 percent in high-yield debt. The diversification has enabled Franklin to rank as one of the least volatile of inflation funds. “By adding more asset classes, we can deliver smoother results,” says Burns.

For a fund that keeps nearly all its assets in TIPS, consider Vanguard Inflation-Protected Securities (VIPSX). Because of Vanguard’s low expense ratios, the fund has been able to outperform most of its competitors without taking on extra risk.