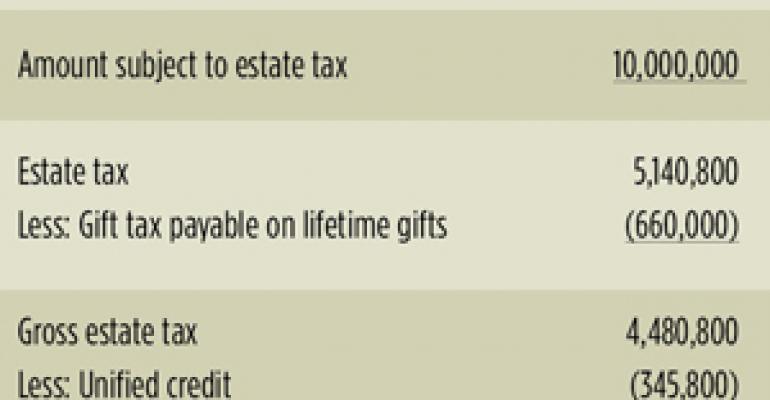 A tax rule set to expire is creating confusion

In response to my article, “Who's Afraid of (Gasp!) CLAWBACK?,” I received questions from readers asking: Is clawback real?
Several prominent tax institutes have suggested that it’s not. The answer depends on how the unified credit works in the estate tax’s computation of taxes paid on lifetime gifts for estates of decedents dying after 2012. The unified credit now works the same way that it did before 2001, the year when the Economic Growth and Tax Relief Reconciliation Act of 2001 (EGTRRA)1 was enacted.

When it comes to clawback, present-day Internal Revenue Code Section 2001(g), which addresses how to compute gift taxes deemed to be paid on lifetime gifts for purposes of determining the estate tax, is causing confusion.[2] It’s tempting to analyze it in relation to clawback, but consideration of IRC Section 2001(g) in an estate tax computation for a post-2012 estate is completely misplaced. Section 2001(g) was added by the Tax Relief, Unemployment Insurance Reauthorization, and Job Creation Act of 2010 (TRUIRJCA)[3], enacted Dec. 17, 2010, and expires, along with all of the other EGTRRA transfer tax provisions that TRUIRJCA extended, for estates of decedents dying on or after Jan. 1, 2013. This return to pre-EGTRRA rules creates clawback. It will take Congressional action to fix it.

I’m not the only one who thinks the statute needs a fix. The drafters of the recently introduced Sensible Estate Tax Act of 2011 (H.R. 3467) included a provision to defeat clawback (see Section 2(c) of that proposed legislation).


Clawback Example
Here’s an example to illustrate how clawback works. Say Jan made a gift of $5 million in 2011 and dies in 2013. Jan’s taxable estate is $5 million. For simplicity, I’ll ignore application of inflation adjustments to transfer tax rules. If there’s no clawback, Jan’s $5 million in lifetime gifts should result in her estate being taxed at 55 percent, the highest tax rate, producing an estate tax of $2.75 million.

Now, let’s consider the effect of taxable gifts and see whether clawback has an effect.

The lifetime gift of $5 million pushes Jan’s taxable estate of $5 million into the 55 percent tax rate. Since a 55 percent estate tax on $5 million amounts to $2.75 million, the clawback tax is $1.385 million, the difference between the estate tax of $4.135 million and the $2.75 million of estate tax on assets held at death. The effective rate of the clawback tax is 27.7 percent: that’s 7.3 percentage points less than the 35 percent rate now in effect. An estate tax rate that’s comparable to a 35 percent gift tax rate is about 25.9 percent (because the gift tax computation excludes the gift tax while the estate tax computation includes the estate tax). Bottom line: there’s little or no tax rate disadvantage in clawback. But, as clawback was a mistake, let’s hope Congress fixes it.

1. Public Law 107-16.
2. Internal Revenue Code Section 2001(g) adjusts the tax on lifetime gifts by substituting the tax rates in the year of death for the tax rates in effect when the gift was made when computing the tax on lifetime gifts, as well as the sum of the amounts allowed as a credit for all preceding periods under IRC Section 2505(a). In so computing the credits, the applicable exclusion amount for the year of any gift isn’t adjusted. Rather, the credit against the tax based on that year’s applicable exclusion amount is adjusted by using the transfer tax rates in effect in the year of death instead of those in effect in the year when the gift was made. For example, for the estate of a decedent who dies in 2012, a gift tax computation for the year 2006, when the applicable exclusion amount was $2 million would use a credit of $680,800 (based on 2012 rates) instead of $780,800 (based on 2006 rates).
3. Public Law 111-312.