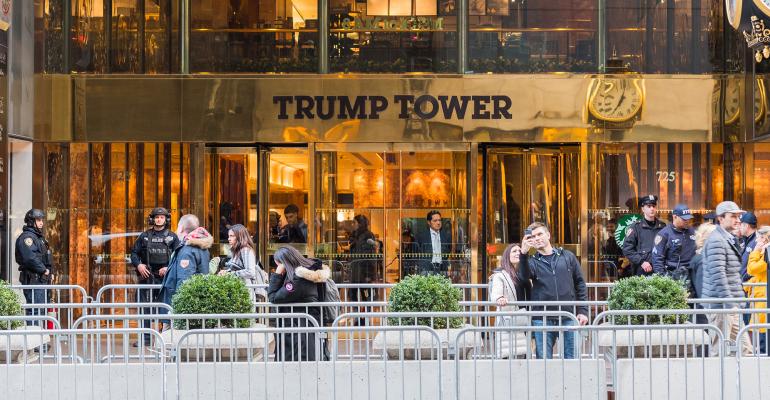 The Trump Organization has more than $590 million of debt coming due within the next four years.

(Bloomberg) -- Six months after President Donald Trump helped incite a riot in the Capitol, prospects for his family business were surprisingly not that bad.

Sure, some business partners were cutting ties and fewer tourists were staying at his hotel in Washington D.C., but he’d recently refinanced debt tied to one of his most valuable properties, Mar-A-Lago was bustling and he was teasing a new social media operation.

Now, in the latest twist, the business and its longtime Chief Financial Officer Allen Weisselberg, 73, are facing charges relating to tax crimes. The exact charges Weisselberg is facing will be unsealed on Thursday, but are expected to involve unpaid taxes on benefits extended to him. The move by Manhattan District Attorney Cyrus Vance could have long-term repercussions on Trump’s ability to keep the business afloat and refinance debt.

“The District Attorney is bringing a criminal prosecution involving employee benefits that neither the IRS nor any other district attorney would ever think of bringing,” a spokesperson for the Trump Organization said in a statement Thursday, without commenting on the impact on the family-run firm. “This is not justice; this is politics.”

The Trump Organization has more than $590 million of debt coming due within the next four years with more than half personally guaranteed by Trump. This includes $100 million on Trump Tower in Manhattan maturing next year and $125 million due in 2023 for the Trump Doral golf resort near Miami.

Criminal charges are unlikely to force immediate repayment of the loans and Eric Trump, the former president’s son and an executive vice president at the company, has repeatedly stressed that its debt load is manageable.

Commercial loan covenants don’t typically mention criminal charges in part because they’re such a rarity for businesses, but also because charges are just that -- charges, not convictions, according to professor Adam Levitin at Georgetown University, who specializes in bankruptcy and commercial law.

A spokesman for Deutsche Bank AG, a favored lender for the Trump Organization, declined to comment on how the charges may impact the loans they have coming due.

Even if the loan documents don’t speak directly to criminal charges, sophisticated lenders -- and their lawyers -- can find a way to push the issue. Federal courts are no stranger to lengthy, expensive fights over what gives rise to defaults under commercial lending agreements.

“Regardless of the specific provisions in loan documents, when a lender wants to cut ties with a corporation that’s in trouble -- particularly in trouble with the law -- the lender will often find a way to call a default and get out of dodge,” said David Prager, a restructuring and financial adviser at Kroll, who wasn’t speaking about the Trump situation specifically.

It may also be harder to find banks willing to refinance the debt down the road -- most banks would balk at extending a loan to a company subject to a criminal indictment.

In the short term, the Trump Organization does have cash on hand, at least $289 million, according to the Bloomberg Billionaires Index. The firm got a boost in April when Vornado Realty Trust, run by Steven Roth, refinanced debt on an office tower in San Francisco that it owns with Trump. The refinancing enabled a $617 million cash out for its owners. Trump has a 30% stake in that tower.

“We are one of the most under-leveraged real estate companies in the country relative to our assets,” Eric Trump said at the time of the bond sales.