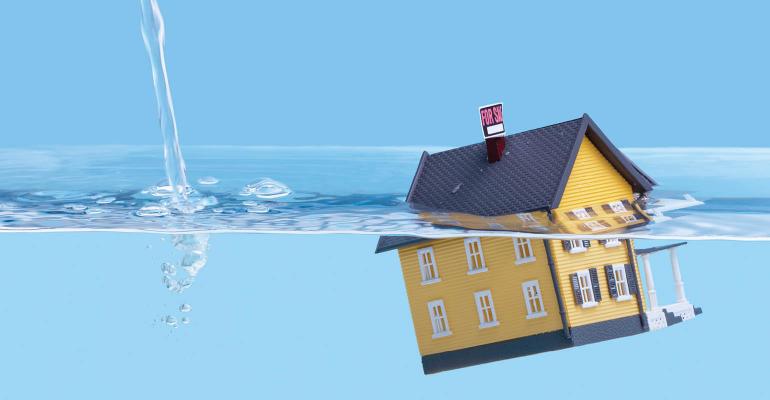 A Rent Wipeout Could Ignite a Mortgage Crisis: Brian Chappatta

If the rent for this period is just never paid, there is a risk of a health crisis turning into “a banking crisis.”

(Bloomberg Opinion)—The rent is too high. And that’s causing consternation across Wall Street desks still traumatized by the 2008 financial crisis.

As the days go by in an unprecedented shutdown of the U.S. economy to slow the coronavirus outbreak, any amount of rent looks increasingly difficult to cover for a wide swath of Americans, from recently fired service workers to local small-business owners. Unfortunately for those most affected, these payments can’t simply be wiped out — at least, not without dire repercussions. My Bloomberg Opinion colleague Noah Smith wrote a column this week arguing that people need a break on all sorts of debts.

But when it comes to rent, there’s pretty much no way around people eventually paying what they owe, ideally with the help of the U.S. government, or else risk “turning a health crisis into a banking crisis.”

This, more or less, is the catastrophic “domino effect” that real-estate investor Tom Barrack, chief executive officer of Colony Capital Inc., warned about this week. Simply put, if commercial tenants don’t pay rent because of a lack of cash, then property owners might be squeezed and default on their mortgage payments. The same goes for homeowners. That could bring the problem squarely onto the balance sheets of large U.S. banks, which will suffer steep losses on their loans.

At first, it might have seemed as if Barrack was simply talking his book. But as more details emerged about the carnage across the $16 trillion U.S. mortgage market, it’s clear that the complex web of financial obligations tied to real estate could again be the flashpoint that leads to a financial crisis without some sort of intervention.

Part of the reason that mortgages are again veering into crisis mode is because the modern market has so many moving parts. My Bloomberg Opinion colleague Matt Levine laid it out in a five-part list, which you can (and should) read here. Suffice it to say, if money is being lent twice-over in the repo market, the players are highly leveraged and vulnerable to an unexpected shock. The coronavirus outbreak certainly qualifies as such — some 47,000 U.S. chain stores temporary closed in the span of a week, Bloomberg News reported Tuesday. The median estimate for initial jobless claims on Thursday is 1.5 million, up from 281,000 previously.

This mortgage-market meltdown is happening largely because everyone in the money chain is anxious and wants to cash out at the same time. But it also comes back to rent. It’s anyone’s guess when the American economy will be up and running again and what sort of assistance the federal government will provide to those companies forced to close and those individuals suddenly out of a job. It’s hard to blame banks for not wanting to wait around for answers and instead issue margin calls on mortgage real estate investment trusts.

Those jitters caused emergency sales from the REITs, including relatively safe (and more liquid) agency debt. But that can’t last forever. On Tuesday, Invesco Mortgage Capital Inc. said it could longer fund margin calls, following in the footsteps of AG Mortgage Investment Trust Inc., which said it failed to meet some margin calls on Friday and doesn’t expect to meet them in the future, and TPG RE Finance Trust Inc., which is seeking flexibility from lenders. They’re almost certainly not the only ones.

For now, there’s only so much the Federal Reserve can do to address these strains. It announced open-ended purchases of both U.S. Treasuries and agency mortgage-backed securities on Monday. The central bank is wasting no time flexing its muscle: It’s targeting $250 billion of agency MBS purchases this week after buying $67 billion last week. The previous record was $33 billion in March 2009, according to Morgan Stanley. Many observers are confident that the Fed’s “whatever it takes” model will restore order to the agency MBS market in no time.

For non-agency securities, there’s not yet a dedicated lifeline. My Bloomberg Opinion colleague Marcus Ashworth suggests these assets may be the next order of business for the Fed. It’s hard to argue with that, given the central bank’s already unprecedented moves into the corporate and municipal markets.

Before the Fed launches yet another emergency facility, though, central bankers should assess the fiscal stimulus package from Congress. If lawmakers provide enough relief for the most affected Americans to get through these next few months and cover their rent, lease and mortgage payments, it might be enough to prevent the first domino from falling in Barrack’s example.

The coronavirus outbreak has suddenly halted cash flows of all kinds. Washington needs to keep the spigot open.

To contact the author of this story: Brian Chappatta at [email protected].

To contact the editor responsible for this story: Daniel Niemi at [email protected]