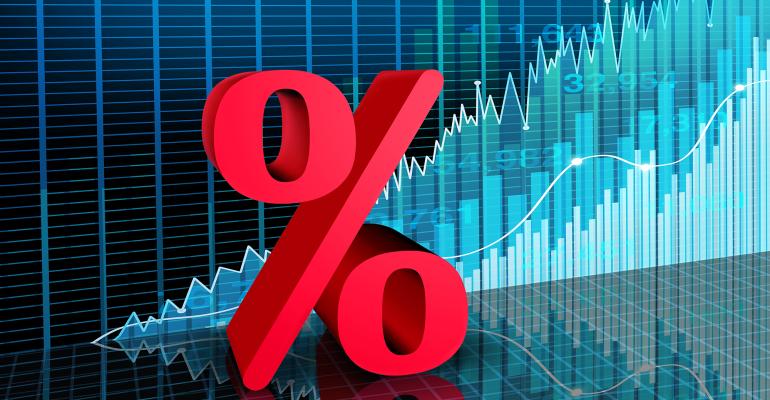 The cooling housing market, the sharp appreciation of the dollar and the headaches caused for many countries worldwide are examples of its effects.

(Bloomberg Opinion) -- The heated debate about how central banks should respond to high and persistent inflation has focused primarily on how high interest rates should go and how long should they stay there. A third issue, that of front-loading the increases, is particularly relevant in this rate cycle. After all, central banks are seeking not just to lower inflation without unduly damaging growth and jobs; they also face the challenge of steering a fragile financial system in which a market malfunction can significantly damage economic well-being.

Consider the Federal Reserve. Having badly misdiagnosed inflation last year and fallen behind its price-stability mandate, the central bank significantly intensified its policy response over the last few months. The June rate increase of 75 basis points was the first of that size in 28 years, and the Fed has followed with two similar increases, a record, with a third one expected at its meeting next week.

This Fed rate-increase cycle, which has already delivered a total of 3 percentage points in just over six months, is the most front-loaded one in a long time. The cooling housing market, the sharp appreciation of the dollar and the headaches caused for many countries worldwide are examples of its effects.

Yet reflecting how tardy the Fed response has been, the financial markets are pricing in an additional 1.75 to 2 percentage points of rate increases for this cycle. Drawing on Chair Jerome Powell’s repeated references to Paul Volcker, the 1980s central banker famous for crushing inflation, quite a few expect high rates to persist for a while.

No wonder so many have lamented the fact that, having to play catch-up, the world’s most powerful central bank risks pushing the US economy into recession, throwing millions of people out of work, worsening income inequality, undermining its independence and causing economic fires around the globe. It is a concern amplified by an operational approach that relies heavily on lagging data and still seems to be still governed by an outdated monetary policy framework. Yet, also as worrisome, is the possibility that an early “pivot” in Fed policy would risk leaving the US languishing in a stagflationary swamp.

This delicate balance between reducing inflation and limiting the hit to economic well-being becomes even more complex because of financial stability worries, including the pronounced threats of malfunction in G-7 government bond markets at the core of financial intermediation. The weakest links in leverage- and derivative-heavy chains have migrated out of banks to non-banks that are both less well supervised and regulated—  a phenomenon that was vividly illustrated a few weeks ago by the near-collapse of firms serving the UK pension system.

The faster the rate-increase cycle, the greater the risk of large financial accidents with nasty economic spillovers. After all, the financial system did what it was incentivized to do during more than a decade in which markets were conditioned to believe in the longevity of a policy regime that floored rates at zero or negative rates, injected trillions of dollars of liquidity and reinforced the belief in a “central bank put” that shielded markets not only from large asset price declines but also what was once deemed normal volatility.

The financial system’s optimization of that regime involved large debt and leverage; over-adherence to unrealistic return objectives; and, for too many, venturing well beyond their natural investment habitat and expertise. After all, even though the skew of each of these factors was distorted and artificial, it seemed tilted in a highly favorable way by central banks’ delivery of the three things that matter most to investors: high returns, low volatility and favorable correlations.

Inflation and the monetary policy changes that it entails require an orderly reversal of this prior optimization — something that is far easier said than done. That is naturally spurring the concern about the pace of the Fed’s rate increases (as well as the fallout of Japan’s experiment with yield-curve control, but that is for another article). If the Fed is not careful, well-intended policy actions could end up causing not just an economic accident (recession) but also a financial one (disorderly deleveraging and disruptive contagion across the financial system and to the real economy).

In theory, the Fed’s growth and financial stability challenges could be resolved without harming the battle against inflation by convincing markets that the rate destination remains the same but the journey will be prudently slower. In practice, this is hard for a central bank that, to quote the president of the Atlanta Fed, is already associated with a “frankly disappointing lack of progress on curtailing inflation.” The Fed is increasingly stuck in a three-dimensional rock-versus-hard-place situation.

It is time to recognize that the speed with which interest rates are going higher for longer, while needed to curb inflation, significantly increases the risk to financial stability. If only all the earlier talk of transitory inflation, soft landings and immaculate disinflation had not delayed policymakers’ reactions and the associated repositioning of markets.

Now that time is no longer in its favor, the Fed will need even greater skill, and a lot more luck, to navigate such a complex inflation-growth-stability configuration.

To contact the author of this story: Mohamed A. El-Erian at [email protected]