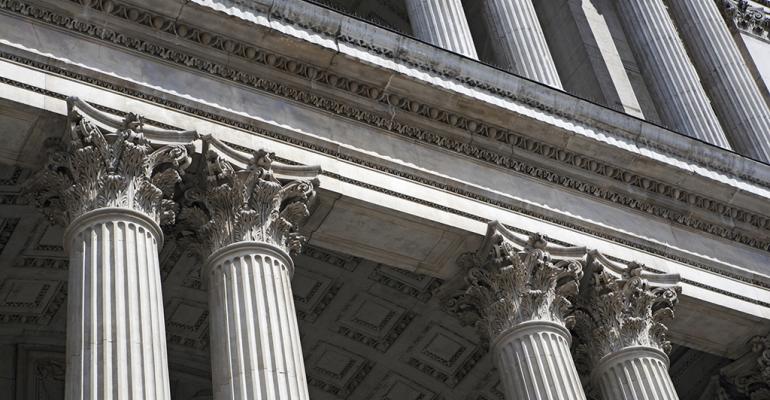 Banks have certainly enjoyed a nice run on Wall Street lately. But if borrowers were hoping that a bump in stock prices would translate to sweeter deals on commercial real estate loans—think again. It is business as usual for bank lenders, and many are anticipating that 2017 lending volumes will be on par with 2016.

The good news for borrowers is that capital is still relatively cheap and readily available for new loans and refinancing, even with an uptick in interest rates and more evidence that the market is marching closer to a peak. The Mortgage Bankers Association (MBA) is projecting that originations of commercial and multifamily mortgages will grow by 4.0 percent to $537 billion in 2017. Another 2.0 percent increase is expected in 2018, with originations forecast to reach $546 billion.

Banks have been maneuvering more cautiously in the post-recession, tighter regulatory environment. “I think banks have remained prudent in sticking to their bread and butter of bridge and construction lending,” says Dan Baker, executive vice president in the real estate capital markets group at KeyBank. Bank underwriting has not gotten overly aggressive, which has created some opportunity for non-bank entities to step in and provide capital for higher leverage deals and less creditworthy borrowers. However, rather than feel threatened by the new competition, most banks are happy to steer clear of deals that would come with greater risk.

“I think most of the banks have seen very slow and steady growth coming out of the last recession, which has been good for the market,” says Gregg Gerken, an executive vice president at TD Bank Group and head of commercial real estate for TD Bank N.A. Banks still represent a significant capital source in the real estate industry. According to the MBA, mortgage debt held by banks and thrifts accounted for about one third of the $3.1 trillion in total amount of commercial/multifamily debt outstanding in 2016, or $1.2 trillion.

Barring any unforeseen events or an interest rate shock, bank lending volume is expected to be flat in the coming year. Commercial real estate finance industry leaders believe that overall capital markets will remain favorable in 2017, according to the annual survey of Commercial Real Estate Finance Council members released in January. About half of survey respondents (52.7 percent) predict that bank lending will remain the same in 2017 as in 2016, while 28.4 percent predict an increase and 18.9 percent think there will be lower origination volume.

A pullback in multifamily construction financing, a less frothy investment sales market and higher capital costs are all factors contributing to a fairly conservative lending estimates for this year. The outlook for 2018 is also a little more uncertain, because the wall of loan maturities should start to come down and the market will be one more year farther into what has already been a very prolonged recovery cycle, adds Gerken.

TD Bank expects a slightly slower year ahead for its multifamily lending. The bank is an active lender on construction loans and permanent loan refinancing—both of which could very well see a decline this year. “Given that there has been a recent uptick in interest rates, coupled with a lot of people who have already taken advantage of refinancing, we just don’t think there will be quite as much volume,” says Gerken.

Higher capital costs could impact investment decisions and slow transactions. “Any time we see a sudden increase in rates, we find ourselves in a stare down between buyers and sellers a little bit and there is this price discovery period that goes on that slows down activity,” says Baker.

The 10-year Treasury rate jumped 80 basis points in fourth quarter, from 1.63 to 2.45 percent and continues to hover at about 2.48 percent. There was a fair amount of deals in the pipeline from 2016 that have carried into 2017. But there has been a slowdown in new deals starting in December that has carried through January. “So it is hard to tell whether it is the new norm or the market taking a breather,” adds Baker.

The Trump administration could also produce both positive and negative changes for bank lenders. Some of the key issues the banking industry will be watching closely this year will be tax reform, a potential rollback of Dodd-Frank and changes to Fannie Mae and Freddie Mac. As of Feb. 3, President Trump had ordered a review of Dodd-Frank financial regulations. It is widely anticipated that could produce some easing of the regulatory burden for banks.

Specific to multifamily, the Low-Income Housing Tax Credit market is one area that is in limbo waiting to see how tax reforms could impact that market, notes Scott Bassin executive vice president and head of multifamily at PNC Real Estate. In addition, Fannie and Freddie are potentially on the chopping block as the mandate for the agencies funding expires at the end of the year. It remains to be seen whether Congress will pass legislation that maintains the status quo and simply puts funding back in place, or if there is major restructuring ahead to privatize, consolidate or dissolve the two agencies.

Fannie and Freddie will likely be a bigger priority for Congress in the second half of the year as the funding cut-off date draws closer. “What we are hoping and expecting with whatever happens with Fannie and Freddie is that there is some orderly transition so that market is not disrupted,” says Bassin.

Some banks have been outperforming the broader market and hope to keep that momentum going in 2017. KeyBank, for example, posted a strong year in both its on-balance sheet and off-balance sheet lending in 2016, and the bank expects volumes to rise further in the coming year. Part of that has been due to some key hires in the past 24 months. The bank has also seen an uptick in its healthcare and FHA lending specifically. That business grew from $300 million in 2015 to $700 million in 2016. KeyBank has also put more focus on affordable housing lending and anticipates that business will grow in 2017, adds Baker.

CMBS could be another bright spot for banks in the coming year. CMBS issuance was down in 2016 as the market tried to sort out the new risk retention rules. Issuance volume totaled $76 billion last year compared to $101.1 billion in 2015, according to Commercial Mortgage Alert, an industry newsletter. However, sponsors have introduced new structures, including new deals introduced in January, that have tested all different models of horizontal, vertical and even L-shaped risk-retention models. The industry is adapting and looking at those different structures and they are being accepted by investors, says Baker.

And while the multifamily market might not be as white hot as it has been over the past six or seven years, some bankers are expecting another good year ahead for multifamily lending. “Fannie Mae and Freddie Mac in particular have been doing a ton of business,” says Bassin. “If there has been any slight cooling, it might be in construction loans for multifamily, but even with that there is still an active group of construction lenders in the market.”

PNC continues to provide capital on multifamily construction loans, although its lenders are keeping a close eye on markets that have had a lot of supply and signs of flattening rent growth.

“For us, we look first and foremost at how good our borrower and sponsorship is,” says Bassin. If it is a good borrower that is going into a market that looks like it may be softening, PNC will still do the deal, but with more conservative terms. “You adjust your terms to the market conditions, but we haven’t redlined any market,” he says.