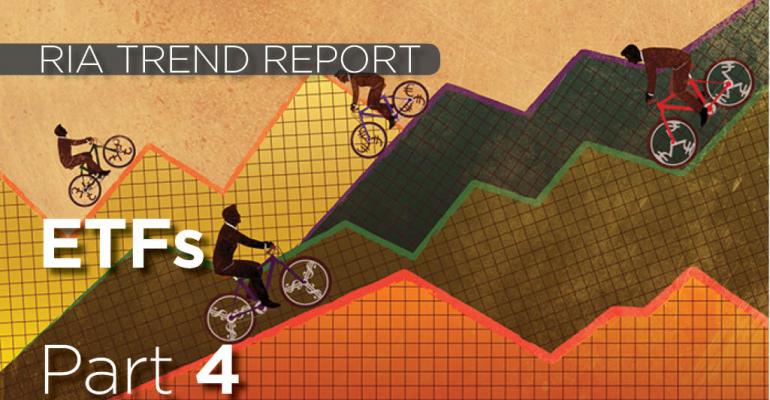 RIA Trend Report 2016: Strategic Role of ETFs in the Portfolio

While the overall usage numbers demonstrate a clear trend towards stabilization in the rate of increase in utilization of exchange traded funds, it is important to get an idea for how these products are being deployed within client portfolios. While using ETFs as core portfolio positions remains a dominant role cited by RIAs, we note some interesting changes in this year’s responses that parallel the development of the ETF market and increased variety of ETF products at advisors’ disposal. Specifically, at 53% this year compared to 42% in 2014, we observe a significant increase in ETF usage for sector plays. Not only are sector ETFs increasingly liquid, but the divergence in performance among sectors over the past year or two may be enticing RIAs into making more specific sector bets. We also note an increase in ETF usage for directional market positions, at 35% vs. 30% in each of 2014 and 2013. Using ETFs for alternative exposure is essentially unchanged but up from 25% to 27%, which is noteworthy mostly because there was a significant decline from 33% in 2013 to 25% in 2014. Clearly, the versatility and variety of ETFs, and exchange traded products in general, remains a significant factor in the growth of the asset class over the last two decades.

Next Part 5 of 6: Advisors' Self-Rated Knowledge