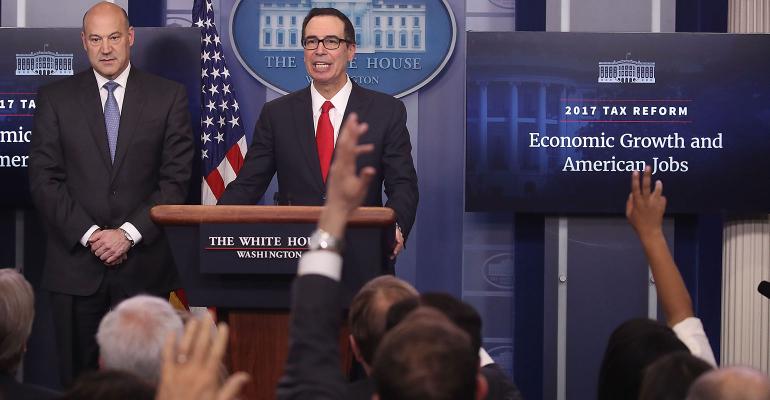 Eliminating the estate tax and the alternative minimum tax are among the proposals.

By Sahil Kapur and Shannon Pettypiece

(Bloomberg) --The White House made its opening bid for what officials called the “biggest tax cut” in U.S. history -- with cuts that would benefit businesses, the middle class and certain high-earning individuals -- but left unanswered questions about whether the plan would be paid for, or how.

A list of goals for the tax overhaul, unveiled by President Donald Trump’s top economic adviser Gary Cohn and Treasury Secretary Steven Mnuchin Wednesday, calls for slashing the federal income-tax rate to 15 percent for corporations, small businesses and partnerships of all sizes. It also imposes a one-time tax on about $2.6 trillion in earnings that U.S. companies have parked overseas. The plan would end the taxation of corporations’ offshore income by moving to a territorial system, in which most foreign profits would be exempt from U.S. taxes. Currently, the U.S. taxes business income no matter where it’s earned.

At the same time, the plan doesn’t specifically protect the federal income-tax deduction allowed for state and local taxes -- a provision that would hit high earners in high-tax states, including New York and New Jersey. The only itemized deductions that would be preserved under the plan would be for home mortgage interest and charitable contributions.

The move to tax partnerships, limited liability companies and other so-called “pass-throughs” at 15 percent would represent a major tax cut for many businesses -- from mom-and-pop grocers to hedge funds -- including Trump’s own business empire. Under current law, those companies pass their earnings and deductions through to their owners, who then are taxed at their individual income tax rates.

Shortly after the election, Mnuchin said Trump’s tax plan would provide “no absolute tax cut for the upper class.”

It wasn’t immediately clear Wednesday whether the plan would pay for itself; Mnuchin and others have said it would stimulate enough economic growth to cover the cost of the tax cuts. Economists have called that proposition into question -- raising questions about whether any tax cuts it proposes would have to be temporary under congressional rules.

“This is going to be the biggest tax cut and the largest tax reform in the history of our country and we are committed to seeing this through," Mnuchin said at an event in Washington on Wednesday morning.

Trump’s goal of enacting a large tax cut faces daunting obstacles in Congress, including surefire Democratic opposition. The Republican Party is divided on how and whether the plan should be paid for. And a Senate rule prevents any tax plan from adding to the federal deficit outside a 10-year window -- if it’s enacted with a simple majority rather than 60 votes, a procedure known as budget reconciliation.

“We want to look at every avenue, but we think reconciliation is the preferred process, we think that’s the most logical process to bring tax reform through,” Ryan said to reporters Wednesday. Senate Majority Leader Mitch McConnell said Tuesday he doesn’t expect to have Democratic involvement on the tax plan.

Senator Chuck Schumer, the Democratic leader, promised opposition to a tax plan that gives breaks to the highest earners.

“If the president’s plan is to give a massive tax break to the very wealthy in this country -- a plan that will mostly benefit people and businesses like President Trump’s -- that won’t pass muster with we Democrats,” he said Wednesday morning on the Senate floor. “We don’t need a tax plan that allows the very rich to use pass-throughs to reduce their rates to 15 percent while average Americans are paying much more.”

‘Too Early’
The White House proposal didn’t specify whether a tax plan should be revenue-neutral -- if it isn’t, the cuts would expire within a decade. It didn’t take a position on revenue-raisers that House Republican leaders have proposed, including a border-adjusted tax on imports and domestic sales.

The White House proposal mirrors parts of the tax plan Trump proposed during the campaign, which would cost the government $6.2 trillion in the first decade, and more than $20 trillion by 2036 after accounting for interest costs and macroeconomic factors, according to an analysis by the nonpartisan Tax Policy Center.

Cohn and Mnuchin briefed Ryan and McConnell, along with House Ways and Means Chairman Kevin Brady and Senate Finance Chairman Orrin Hatch on Tuesday afternoon. As Hatch left, he tempered expectations of the White House and Congress coming to agreement on key tax questions in the foreseeable future.

“It’s too early,” Hatch told reporters. “We’re just getting into it.”